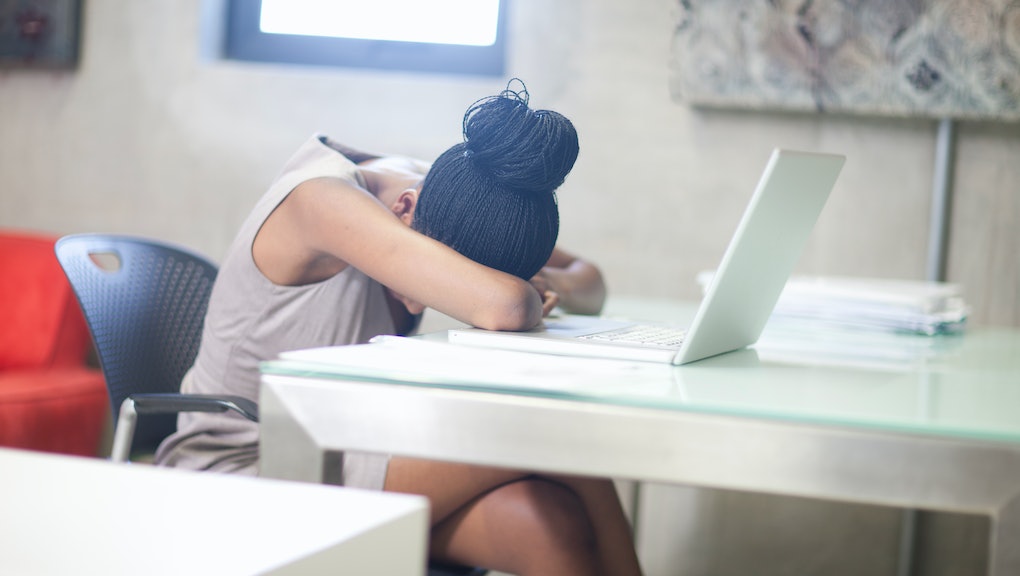 Being the token woman at your office is undeniably annoying. But a new study says it could also be harmful to your health.

According to the study, which was recently presented at the American Sociological Association, women who work in male-dominated industries experience "abnormally high stress levels." That's in addition to the other fun things women frequently experience in predominantly male workplaces, such as lower pay, isolation and invisibility, obstacles to promotion and, of course, sexual harassment. Because being a woman is delightful.

The study: Researchers at Indiana University looked at the stress levels of more than 440 women who worked in fields where at least 85% of the jobs are occupied by men, such as engineering or construction work. Women who have 15% or fewer female colleagues are, to use the academic term, considered "tokens." They're also exposed to various interpersonal stressors associated with working in a male-dominated occupation, such as lower pay and not getting promoted as quickly as their male counterparts. These stressors cause irregular patterns of cortisol, the hormone that regulates stress.

The study found that so-called "token" women exhibited more unhealthy cortisol fluctuations throughout the day than their male counterparts, as well as women who worked in offices with a more balanced gender ratio. The research team also controlled for individual-level characteristics that might also affect women's stress levels, such as their dispositions or their roles in the office. They concluded that the stress was "due to the negative working conditions of token women."

The privilege of leaving work at work: The stress token women exhibited can have major negative physiological consequences, from insomnia and depression to problems with liver function. It's the same sort of hormone irregularity that's associated with post-traumatic stress disorder and it can potentially have lasting repercussions for women that go beyond the workplace, or even well after they leave their jobs.

Although it's unclear exactly how long the effects of gender imbalance-related stress last, the study illustrates yet again why true workplace diversity needs to be a priority. In addition to opening up to a variety of ideas and viewpoints, gender-diverse workplaces have also been shown to have wider access to resources and higher profits. If these benefits aren't evidence enough that hiring just a handful of "token" women doesn't work, maybe the cost of insurance coverage for burnt-out female employees will make a compelling case.