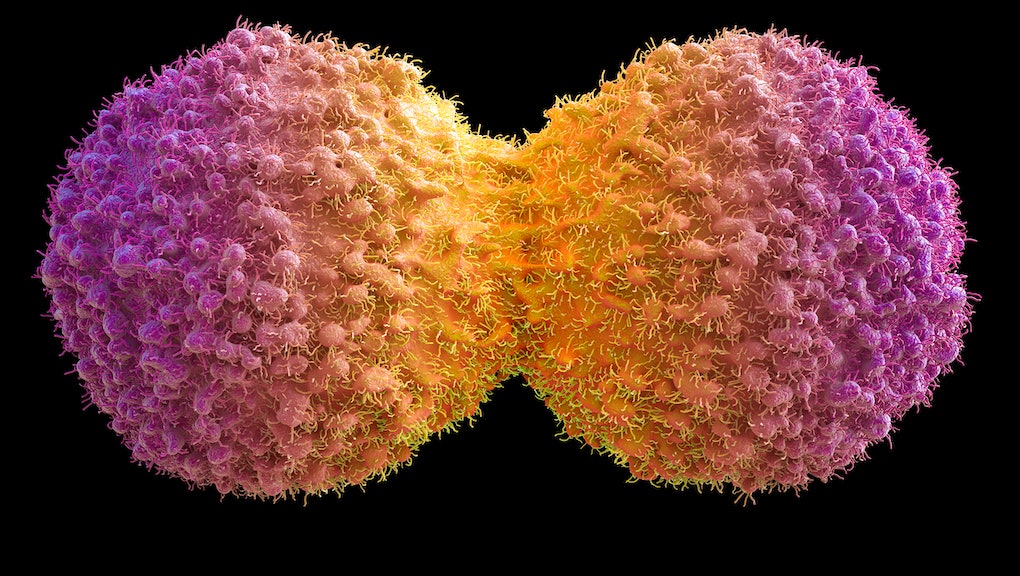 Scientists Invented a Brilliant Method That Stops the Spread of Cancer

When a team from Mayo Clinic's Florida campus injected breast, lung and bladder cancer cells with the protein PLEKHA7, they were able to "program" some cancers to stop multiplying and spreading, the Telegraph reports.

So far, the method has only been performed in vitro and not tested on living human patients, but if it's successful in human trials, it could eliminate the need for brutal treatments like chemotherapy.

According to the corresponding research paper in Nature Cell Biology, PLEKHA7 is thought to keep cells from dividing and multiplying. So while the procedure wouldn't kill the cancer cells in a tumor, it would prevent them from going anywhere else. In turning tumors from malignant to benign, the procedure would greatly increase the chances of doctors catching and eliminating problem cells.

"Initial experiments in some aggressive types of cancer are indeed very promising," professor Panos Anastasiadis from Mayo's Department of Cancer Biology told the Telegraph. "It represents an unexpected new biology that provides the code, the software for turning off cancer."

Since the method hasn't been testing on living patients and has only been performed in the vacuum of single-cell studies, it's hard to tell whether the cancer wouldn't still be able to spread in a real-life application.

Right now, cancer treatment wreaks havoc on the human body, often causing new complications like blood disorders, nerve damage and reproductive issues in the effort to stop the spread of bad cells. But these early results provide hope of one day modifying just the specific genes involved in cancer. It would spare patients from extremely invasive measures that kill not only their disease, but also all kinds of other cells needed for survival.

"This is an unexpected finding," Dr. Chris Bakal, of the Institute for Cancer Research in London, told the Telegraph. "We have been trying to work out how normal cells might be suppressing cancer, and stopping dividing when they form contacts with each other, which has been a big mystery. ... Normal cells touch each other and form junctions then they shut down proliferation. If there is a way to turn that back on then that would be a way to stop tumors from growing."

It's admittedly not perfect, and it will probably take a long time to go from tinkering with cells in a lab to using the findings in a human subject. But when you consider the millions of people cancer kills every year, it's an encouraging start to how doctors can handle malignancy, ushering in an era of less invasive cancer treatment.