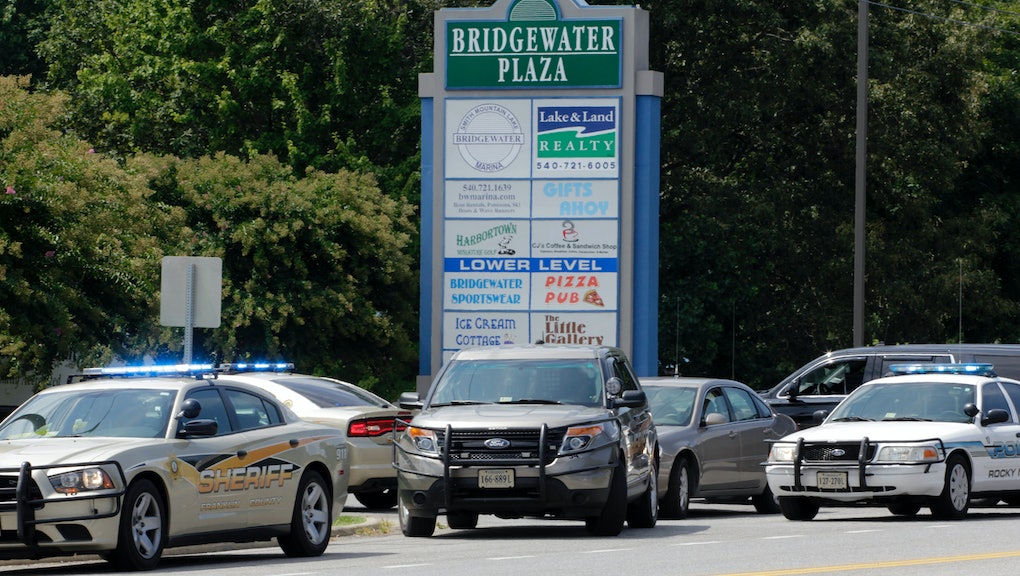 Wednesday morning's attack at Bridgewater Plaza in Moneta, Virginia, was the United States' first real social media shooting — an event that was documented by the alleged killer, Vester Lee Flanagan, and published online while he was on the run. Before Twitter could take down his account, it had already been shared on multiple platforms, filling feeds with autoplaying videos of loud gunfire and screaming.

The first clip shows the gunman standing, his weapon out, waiting for his moment. He looks like a paused player in a first-person shooter — for 30 seconds, it's as if he's invisible. In the Mic newsroom, I shouted as the clip ended with the gunman's weapon raised, waiting. And then, at the top of the feed, an ominous update: "View 1 New Tweet."

The second video, which shows the shooting itself, will autoplay in my head every time this happens again — and it will happen again.

In a country that makes it obscenely easy for a man with admitted mental issues to obtain a weapon and conceal it in public, Flanagan's shooting won't be the last live-tweeted attack.

Thanks to the Internet, violent misogynists have a platform to distribute their manifestos. Thanks to YouTube, the Islamic State group can upload beheadings as recruitment mechanisms. And already, the media and our technological interconnection are being held responsible:

Do not blame the megaphone. This is not just the Internet we built. This is the world we built — culture, society, media, country. The Internet is simply a stimulant that has heightened every sense, a megaphone in every hand shouting every truth at once.

Call it information overload: Facebook and Twitter deliver a flood of words and images that inject themselves with little intermediary right into our veins. We all had the same gut response to Wednesday's shooting: Everything is awful. This tool we depend on is sucking us dry.

But look at the big picture. Social media will not stop reminding you about the worst of civilization, the end results of the mechanisms that enable the cold-blooded shooting of two young journalists, police killings of unarmed black men, or a church massacre by a white supremacist. And then it will boost the solutions, the activists, the agents of change.

In that stimulation, the Internet can be useful. The marriage of cellphone videos, social media and police body cameras have given rise to Black Lives Matter, a movement that says, "You cannot ignore us, because we have the footage to show you what has always been true, and you will not look away."

Body cams and Twitter have not created a sudden outbreak of police violence, nor have they manufactured a trend of injustice. These tools have, like acid, corroded the thick membrane protecting us from what has always been true.

It is gruesome, and loud, and evil, ugly, beautiful and righteous, all at the same time, just like the world is all of those things at once.

Today, we opened Twitter, and it said: This is what murder in the first person looks like. These are guns; look how they fire. This is terror; these are screams. The Internet will not apologize, and it's not going to take it back.

Next up in the cycle of news: The media will talk gun control and mental health, and the NRA will respond disproportionately. People will say the event has been "politicized," which is code for telling people to shut up about real issues. And here, in a country where these killings are happening every week, there are real issues to be solved.

This Internet we built is real life. It will get loud, and it should. Are you hurting? I'm hurting too. Join in. Facebook and Twitter are still on, and they're waiting for the next signal to amplify. What is your signal?