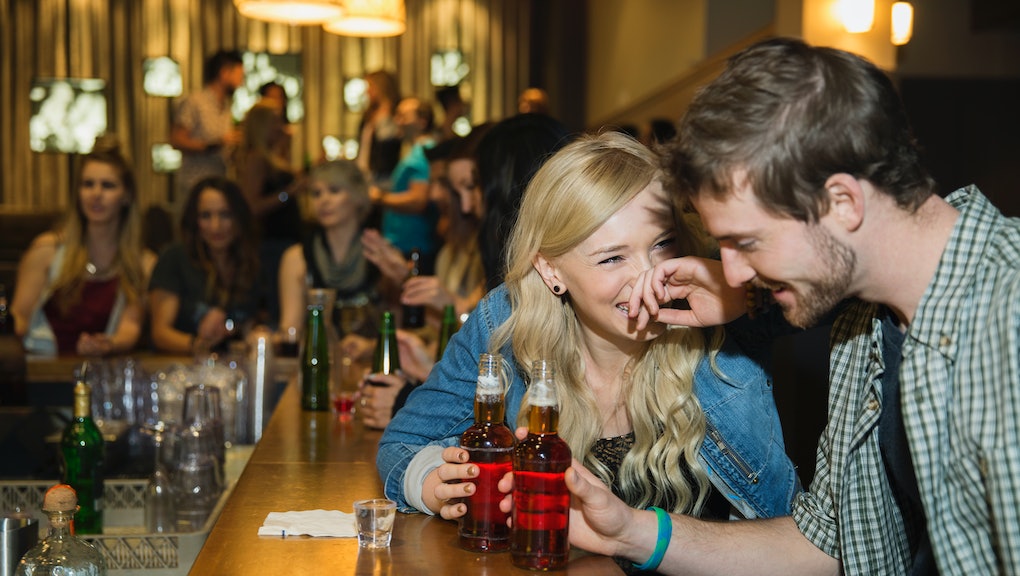 Playing Fantasy Football Together: The Ultimate in Couples' Commitment

Earlier this week, I participated in my favorite annual tradition: sprawling out on a recliner in my PJs while typing obscenities at my friends and family in all caps. It was my online fantasy football draft, and I do it every year.

This year, however, there was a twist: My boyfriend was sitting on the couch right across from me, curating his own team and shit-talking my decision to draft a tight end in the first round. (For the record, I had 11th pick and the tight end in question was Rob Gronkowski, so I stand by my choice.)

For couples, fantasy football season is filled with equal parts playful bonding and lava-thick tension, earnest support and ugly resentment. Deception, lies, sexual manipulation: This is not a game for weak couples. It is a game for only the most committed.

Couples doing fantasy together is more common than some might think. While there once was a time when fantasy football was an activity mostly reserved for sports nuts, this is no longer the case. We have an entire sitcom devoted to the pastime on FX, The League. We have grandmas winning titles. And last year, Forbes reported there are 33 million people getting in on the action, 6.4 million of whom are women. A natural byproduct of this boom is that couples of all sexes are winding up in leagues together. There are three in my league alone.

While we may not see couples represented all over the place in pop culture, we have the ultimate fantasy couple with The League's Kevin and Jenny, whose marriage revolves around the game. Central to their identity is the fact that Jenny's football knowledge and fantasy decision-making skills were often far superior to her husband's, bucking gender stereotypes and (hilariously) emasculating her man in the process.

"I am the only woman in the league, so I have a lot to prove. I sometimes refer to myself and my husband as a voting bloc — but I am having a baby soon and I won't entrust my team to him while I'm in labor," Amy, 36, told Mic. "My crowning glory is that I've won the championship and he's never taken the trophy. I bring it up often!"

A web of deceit: While good-natured gloating is to be expected, the spirit of competition in fantasy football can sometimes lead to larger conflicts between couples. "My best player was benched 10 minutes before kickoff, and he decided not to tell me," my sister-in-law recently told me, referring to a Sunday in which her husband tried to use a top player's injury as a chance to sabotage her team when they were matched up against each other. "I ended up losing that week."

He ended up sleeping on the couch that night, but not before putting forth his pitiful defense: "I had no cell service!"

While these types of rifts might not be a huge deal for a couple that's been married for years of history behind them, it may be wise for less established couples to think carefully before entering a league together. After all, the fantasy season does require a months-long commitment.

Amanda*, 27, learned this the hard way when she and her boyfriend broke up — and were faced with determining who would get "custody" of the league.

"We were a week away from the draft," she told Mic. "It was never spoken about explicitly, but the dramatic way in which we ended made it clear we weren't both going to be able to be in the league together."

And even if a couple is in it for the long term, the potential for drama can still be reason enough for some to avoid bringing fantasy football into their relationships altogether, like 27-year-old Mike from New York. "It can't possibly be good. We're both serious trash talkers," he said of himself and his girlfriend. "The situation would probably devolve into angry, resentful sexual escapades."

And sex can enter the picture indeed, as Amy shared that she's not above wielding her sexuality as a weapon if it might benefit her team's starting lineup:

"I will try to entice him with sexual favors in return for player trades," she said.

Ultimately, though, fantasy football can be great for couples. It's important to note that for the couples to whom fantasy is most suited — competitive, committed and just a little bit fanatical when it comes to football— most of the conflicts are in good fun.

"It creates a foundation for those goofy non-fight fights like 'you stole my favorite player' or 'I can't believe you wouldn't approve my trade' that I think are actually important for a relationship," Rachel, 31, told Mic of being in two leagues with her husband. "Some of my favorite memories of recent fall days have been of us on the couch during football Sunday 'managing' our teams and sharing a hobby, however trivial it might actually be." Indeed, research has long supported the idea that both shared leisure activities and a sense of play are both relationship-boosters, so it makes sense that fantasy football would have an ultimately positive effect on inter-league couples.

While my boyfriend and I already spent most of our Sundays talking about football last year, I'm looking forward to kicking things up a notch with the added elements of shit-talking, friendly competition and trade-bargaining-blowjobs this season. Provided he doesn't withhold any valuable player information from me 10 minutes before kickoff. Then I might actually be pissed.

*Some names have been changed to allow people to speak freely on private matters.