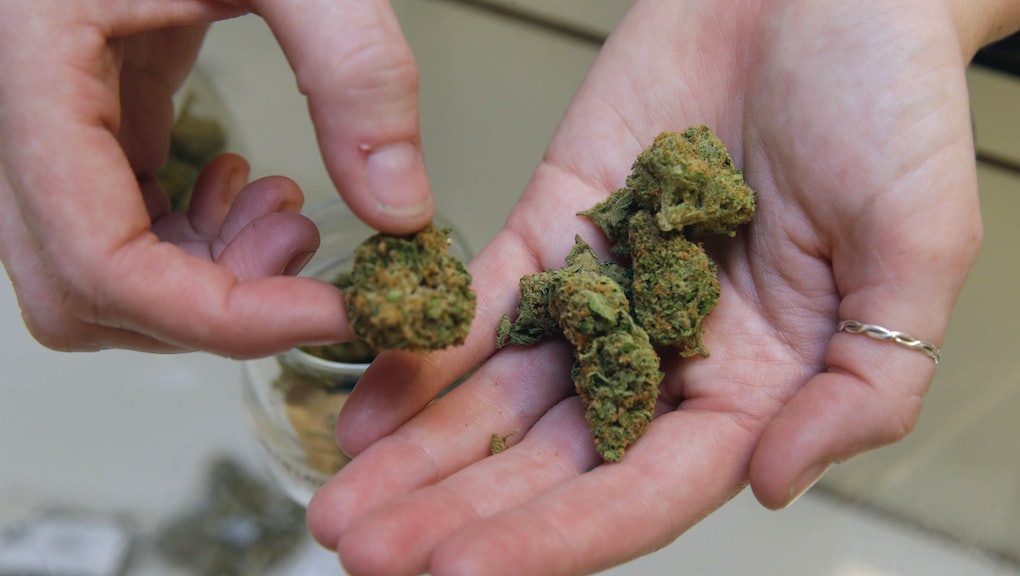 The open bar, an American wedding staple, just got a hell of a lot more boring thanks to one Oregon couple who decided to treat their wedding guests to a straight-up weed smorgasbord.

They had a weed tent. A weed tent!

"We were shocked by how much people loved it," John Elledge, the groom (and self-professed marijuana grower), told KGW in Portland. "I'm still getting a couple of texts a day from guests who enjoyed the weed tent."

While marijuana was legalized in Oregon earlier this year, people have also been lighting up at weddings in Colorado, where pot has been legal since 2012. "We asked a friend to man a weed bar for us," one Colorado weed wife explained to the Huffington Post last year. "He rolled some pretty funny joints, like a tulip, which I'd never seen before, and we mostly used vaporizers."

While all of this sounds amazing, one might wonder if a weed free-for-all could lead to a disastrous situation in which everyone gets too stoned to actually party. After all, as Clueless' Cher Horowitz famously said, "It's one thing to spark up a doobie and get laced at parties, but it is quite another to be fried all day."

This wasn't an issue for Elledge, though, as he told KGW that they kept everything within the legal limit of 8 ounces by having their "budtender" keep track of guests' consumption. He also mentioned that guests had 13 different varieties to choose from.

And if you're worried about grandma being all weird about it, she just may pleasantly surprise you. Elledge told KGW that "an 81-year-old woman who hadn't smoked weed since the '60s came into the tent at our wedding." The result? "Though skeptical at first, she ended up loving it."

And with more and more of us toking up with our 'rents these days, a weed tent could be just what the mother of the groom needs to take the edge off.

It's worth noting, however, that Oregon law did put one major buzzkill on the wedding: A caterer at an event where weed is served cannot legally serve alcohol as well. Then again, with 13 varieties of quality ganj to be smoked, who really cares, man?