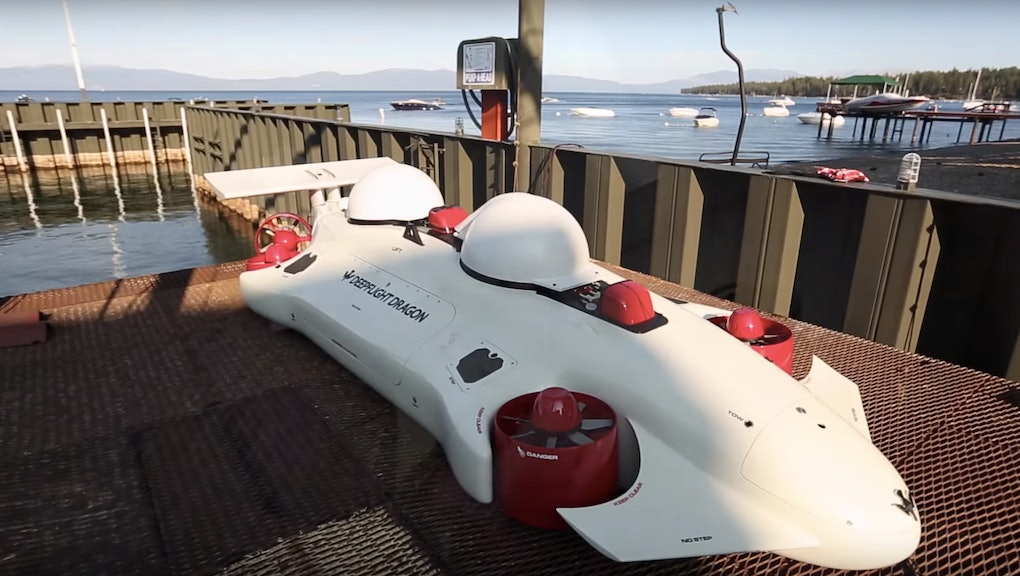 Fly Through the Ocean in This Badass Personal Submarine

Thanks to a British marine engineer, your next trip to the beach could involve piloting your very own submarine — as long as you have $1.5 million lying around.

The DeepFlight high-performance personal submarine company recently showed off its DeepFlight Dragon two-person personal submersible. It might be the coolest thing available for anyone without a license to pilot heavy-duty watercraft: a Speed Racer-esque sub that can go 400 feet underwater (for comparison, the Statue of Liberty is 305 feet tall). It can be piloted using what's basically a joystick: Push the lever, move the submarine.

Unlike a regular submarine, which takes on water to descend and pushes it out back via pneumatics (gas) to go back up, the Dragon is built like a quadcopter drone, using four fans to scoot through the water.

"Wings, fins, they are the same thing," Graham Hawkes, founder of DeepFlight, told Gizmodo in a video.

Since the submarine will probably run $1.5 million retail, it isn't likely to be the 21st-century update on taking inflatable rafts down to the Pacific coast. But as long as Hawkes and his team can get the system foolproof enough, it could be perfect as rentable recreation at beach and ocean getaways. Two resorts already have another DeepFlight model, the Super Flacon, available to guests.

In a few years, family vacation could involve exploring sunken shipwrecks and coral reefs up close and personal. Time to step up your game, Disneyland.