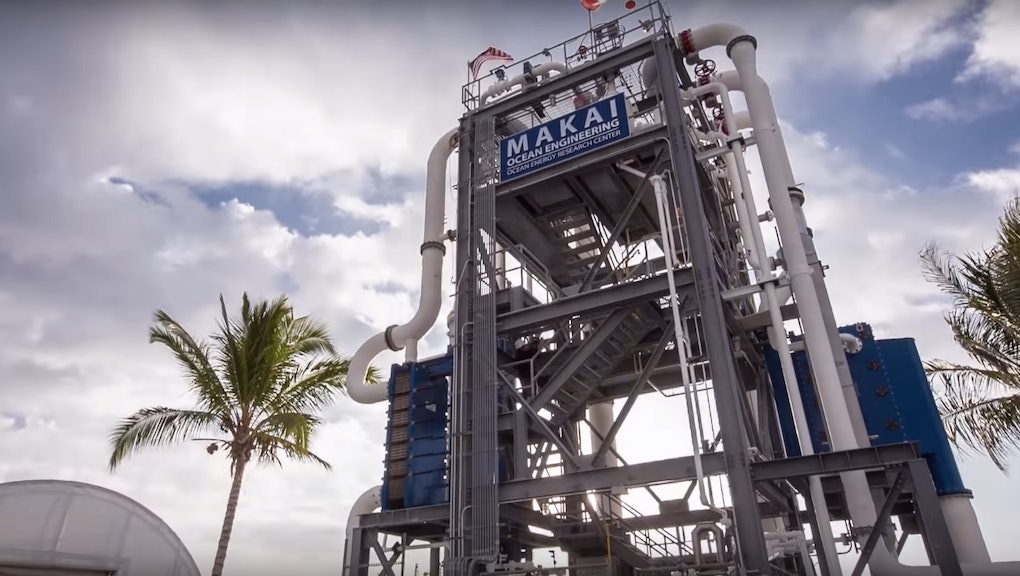 Hawaii's government gave itself 30 years to get on a 100% renewable energy plan, and this brand-new facility could be the way to reach its goal.

The Ocean Thermal Energy Conversion plant built by Makai Ocean Engineering is the first of its kind in the United States and the largest in the world, Bloomberg reports.

This plant is only a demo location. According to Makai's website, a commercial-scale plant could prevent about 1.3 million barrels of oil from being burned and cut over 500,000 tons of carbon dioxide emissions each year.

OTEC harnesses sunlight the ocean absorbs and uses the difference between the shallow, warm water and cold water of the deeper ocean to generate electricity. Using this method, right now, the $5 million facility can provide energy for about 120 homes.

But that low number isn't the important part — it's who's paying attention.

Since the facilities don't need to be onshore — they can stand in the ocean farming sunlight all day — the U.S. Navy wants to use it to switch half of its shore-based energy to alternative sources in the next few years.

Besides cutting down energy use by facilities and the Navy's commercial fleet, the Department of the Navy plans to sail its "Great Green Fleet," what it's calling a Green Strike Group, by 2016.

The big picture: Having alternative, renewable energy on the U.S.'s island state could be crucial for reducing Hawaii's petroleum imports. But globally, the implications for this are massive. Makai boasts that all of Hawaii's energy needs could be taken care of with 12 of these commercial-scale OTEC plants. But what if there were hundreds, or even thousands of them throughout the ocean?

Since the structures can just sit in the ocean, being monitored by presumably a Naval team, countries could purchase the facilities to generate power that, thanks to solar energy, wouldn't run out until the sun literally stopped working.

It would take a while to switch to this method. But if there were a large-scale move to switch to OTEC alternative energy, we could cut costs, emissions and oil-based conflicts dramatically. If more states, and then countries, took a cue from Hawaii's government, we could be looking at a very different environmental and economical climate in the next couple decades.