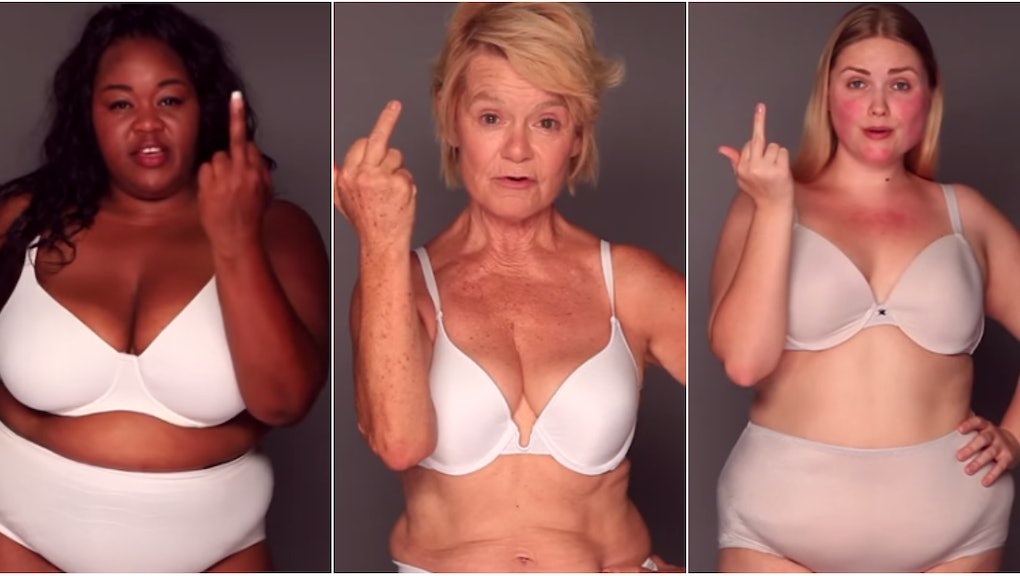 Plenty of industry experts, psychologists and body-positive activists have criticized the big, bad magazine industry for its undying love of Photoshop.

But hearing it from "real women," aka not fashion models, on camera is powerful stuff on its own.

A new video by advocacy T-shirt company FCKH8 showcases women of various ages, races and body types giving Photoshop the middle finger, after unashamedly stripping off the brand's "This Is What a #Feminist Looks Like" shirts and showcasing what real female bodies, untouched by airbrushing, can look like.

Of course, even the models featured in magazines are "real women." But the airbrush that tweaks and tones their bodies, touches up their stray hairs and smooths over their little imperfections contributes to making the bodies we see less real.

"The retouching is excessive. I do not look like that and more importantly I don't desire to look like that," is how Kate Winslet so perfectly put it about a decade ago, when her own body was airbrushed to the hilt.

Over 10 years later, the airbrushing has gotten way more subtle and less offensive, but it's still happening all the time. "Things are never, ever as they seem," model Chrissy Teigen told the Cut earlier this year, adding, "Oh, the retouching."

Thanks to that retouching, we end up not seeing quite so many curves, nor many wrinkles.

FCKH8's video calls out Photoshop for that deception and the shame it can cause women (and men) about their own bodies.

Of course, as SheKnows points out, no video campaign is perfect. FCKH8.com is itself guilty of embracing a single body type on its website, showcasing slender white women; it's also a for-profit company, which some have said conflicts with its social justice mission to take on sexism, racism and other injustices.

Still, seeing women flip the bird to beauty standards is pretty damn awesome — especially if it can get other women, those who aren't modeling T-shirts or making viral videos, feeling inspired to do the same.