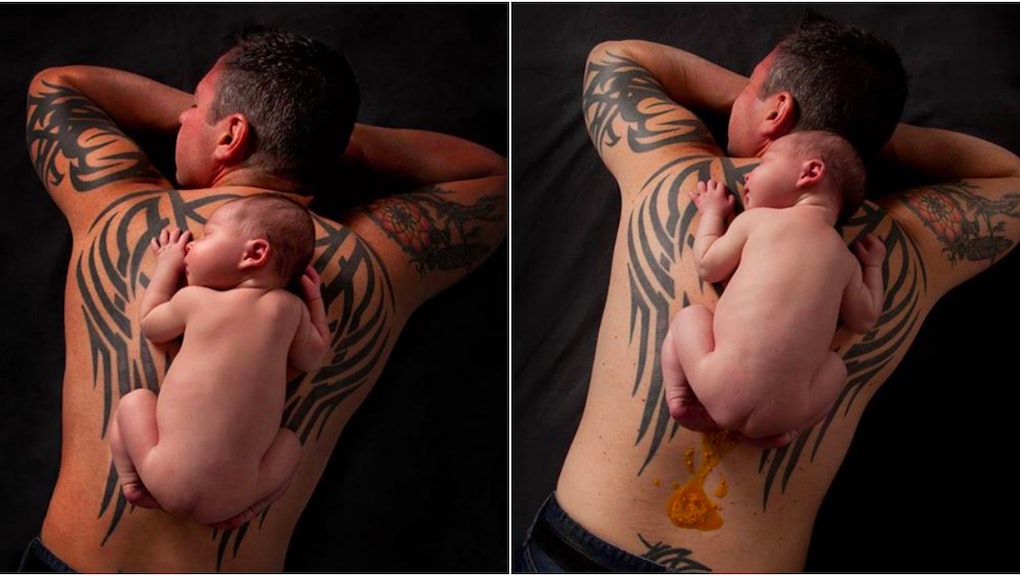 Behold the Messy Truth About Parenting, in One Photo of a Baby Pooping on Dad

No one ever said having a baby was easy, but probably more people should be upfront about how messy it is.

The latest baby photo to go viral is full of shit — literally.

When Florida parents Mark and Shayna Resnick recently popped into the photography studio of Gigi O'Dea for a newborn photoshoot, they didn't intend on the above shot being part of the package.

"This particular photo was particularly important to them as they really wanted a special image where they could showcase baby Asher with the dad's wing tattoo on his back," O'Dea told the Huffington Post UK.

But then the baby decided to take a spontaneous poop, as babies are wont to do.

We're assuming they had some Grade A baby wipes on hand, though, because they were able to get the following sweet image by the end of the whole ordeal:

While getting crapped on isn't the most enjoyable feeling in the world, the Resnicks' photo depicts a reality of parenthood that not many baby portraits acknowledge. Despite what Pinterest and Instagram might suggest, parenthood isn't all about staged poses with flowers and blankies and impossibly cute smiles — sometimes, it's just about poop. And embracing parenthood means embracing that poop, because that's what true love is.

With that in mind, this photo should be a required litmus test for anybody who's thinking about trying to build a family.

If you're so turned off by the idea of getting shit on by a baby, then you may want to think twice about having one. But if you look at this photo and say "YES, BRING IT ON!" then chances are you're on the right track.