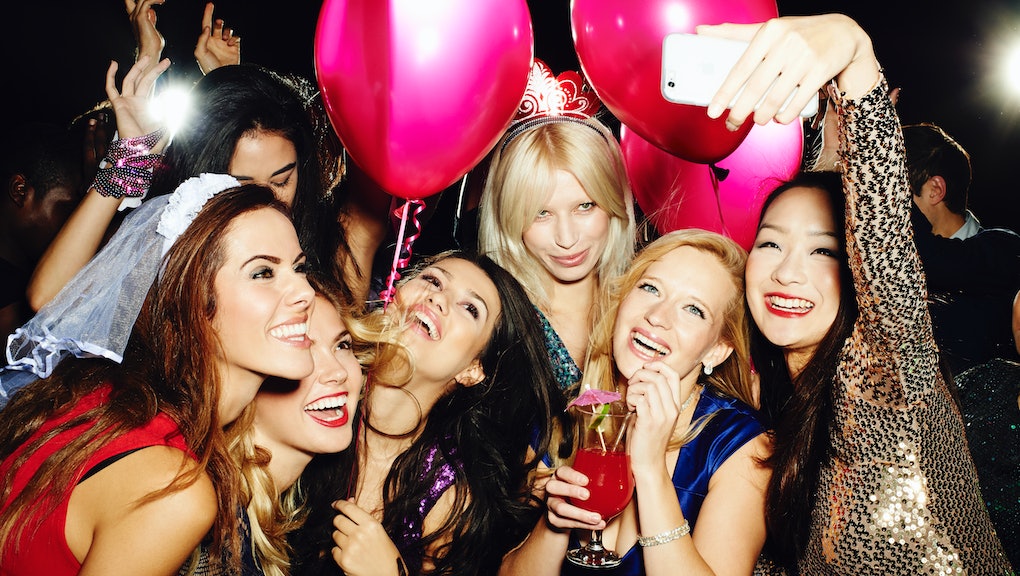 There's a Conversation About Bachelorette Parties That We're Just Not Having

Isabelle*, 26, spent a recent Saturday evening hiding from a stripper. She, along with a dozen other 20-something women, had ventured out of the city for a friend's bachelorette party, a weekend-long affair complete with preplanned meals, plenty of vodka Red Bulls and, of course, a male exotic dancer.

"I think we pictured it being a guy who stands at a distance and dances while we throw money at him," Isabelle told Mic. "Instead, he was physical with us — and girls were practically running away. Like, darting away in corners of the hotel room."

The dancer was hired at the bride's (hinted) request, Isabelle said, presumably because she felt she was "supposed" to hire one for the event. Because that's what people do at bachelorette parties, right?

It's a question that raises more questions. While there's a trend among the soon-to-be-wed of taking fancy vacations with their female friends before tying the knot, bachelorette parties are also a designated time when women can behave like the Hangover groomsmen (but with more penis-shaped paraphernalia).

The (surprisingly short) history of bachelorette parties as we know them now is wrapped up in gender equality and sexual expression: They were intended to be equal counterparts to bachelor parties and stag nights. That's probably why many women include strippers in their bachelorette party itineraries, planning on an evening of debauchery, drunkenness and penis-shaped straws.

The bachelorette party traditions, complete with a stripper, might seem unsavory. But for some women, they're also one of the only places they can feel comfortable flipping gender roles on their heads. Even in the face of less-than-savory experiences with strippers, bachelorette parties can also be critical spaces for sexual empowerment.

Gaining control by letting lose: Bachelor parties, historically, were seen as a "final temptation" for the groom to ensure his commitment to the bride. So bachelorette parties often have to account for society's disparate attitudes toward male and female sexuality. Societally, women simply don't have the same sexual freedom men have, meaning the "final temptation" angle isn't quite as assumed — which makes the reasoning behind hiring a sex worker at a bachelorette party all the more intriguing, and novel.

It also means male strippers are often performing for a roomful of novices, some of whom might never have been given the opportunity to be sexually aggressive or even discover what it is they want. For those women, a bachelorette party might be a first chance to engage with certain fantasies — and they tend to be the ones who enjoy the experience most.

Silk said these women tend to view bachelorette parties as "an opportunity to let loose, to be in an environment where it's OK to do whatever they're doing," which can include taking a more assertive role sexually than they ever have before. But that's not the case for everyone.

"Most girls, wherever they come from, don't have the same sexual experiences as their boyfriends and husbands," Steve Kim, the owner of Wild Boyz who says he's performed at more than 1,000 bachelorette parties, told Mic. "Think about how suppressed women are. It's not acceptable for a woman to come onto a guy. Guys can catcall and be aggressive, and girls can never be the same way. At a bachelorette party, everything goes."

It's no fun when you're not breaking any rules: "Everything goes" can sometimes be an issue for women who are more open about their sexuality to begin with. In Isabelle's case, the stripper didn't help her and her friends familiarize themselves with sexual boundaries. He was there as an ironic reference point — and he ended up crossing boundaries most of them preferred to cross in the privacy of their sexually liberated bedrooms.

As Lauren*, who recently celebrated her bachelorette party, said, she requested a "boring," stripper-free trip to Mexico, because she already experienced other women's "traditional" pre-wedding festivities. She never enjoyed their sexually aggressive dynamics, which she says mostly came from men.

Bachelorette parties are "very aggressive," Lauren told Mic. "I know what makes me feel empowered sexually, and it's not having a strange man stick his face near my crotch."

But it doesn't need to be literal. Actively pursuing a more overtly sexualized experience can be the only thing separating a bachelorette party from your average Saturday evening. "What's the point of having a bachelorette party if you're not going to go all-out with with a 6-foot blow-up dick and penis straws?" one 28-year-old woman told Vogue earlier this year. "Without those, it's just a regular night out with your friends."

Our bachelorette parties, ourselves: "Traditional" bachelorette parties, where women are free to get rowdy like the boys. won't always result in a bright, clear moment of sexual enlightenment for the women in attendance. It might even be uncomfortable. But they do push women to confront their sexuality and get to know themselves better.

"Younger women now are more sexually open and knowledgeable to begin with," Kim, of Wild Boyz, said. "Even for them, bachelorette parties are all about having a fantasy come true for that hour or so."

For some women, the sexual control they're afforded in a sanctioned setting can make it a safe space to feel ... well, whatever it is they're going to feel.

"I went to another bachelorette party where we took a lap dance class, which was great," Tracy said. "People were embarrassed at first, some more into it than others, but by the end, it was sort of freeing — a space where people could have a little more sexual freedom and explore that a bit."

There don't have to be dancers in G-strings present for women to explore their sexuality at a bachelorette party. Becoming more familiar with our sexual tastes — which can include being totally averse to the idea of a male revue — is at the heart of the tradition. Bachelorette parties can be whatever we want them to be, including sexually empowering. Sometimes, that might just take a male stripper.