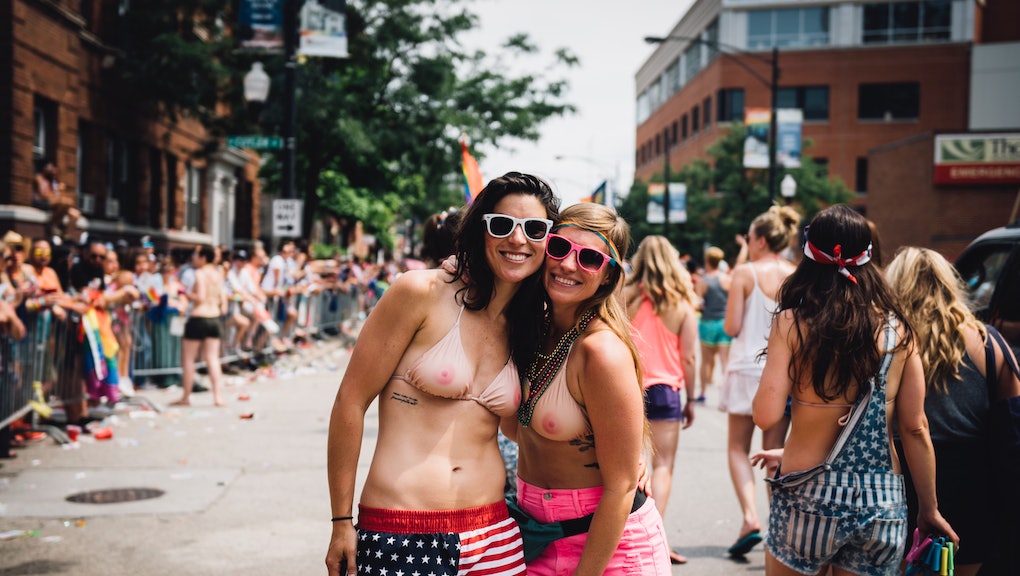 This Married Couple Is Using a Bikini Top to #FreeTheNipple

Chicago couple Robyn and Michelle Lytle were hosting exchange students from the Netherlands who made a trip to the beach on a hot summer day in summer 2012. The female students had no idea, however, that their trip to the shore would include illegal activity. Their crime? Removing their tops.

"They didn't think twice because this is legal and socially acceptable abroad," Robyn Lytle told Mic. The women were confused, therefore, when a lifeguard told them it was illegal to expose their nipples — ironic since he delivered this information shirtless.

The exchange students asked the Lytles to explain this legal double standard, but the couple found themselves at a loss. The truth is that while only three states completely prohibit women from exposing their nipples — Indiana, Utah and Tennessee, according to the organization Go Topless — it's effectively illegal in many other states due to ambiguous indecency laws, Time reports.

"Because of the way the law is written, it is up to the arresting officer or the judge to decide how they personally define 'nudity,'" Lytle said. "It's truly unfair and a gross double standard."

This confusion inspired a desire to "push the boundaries, make society question the social norms and dig a little deeper" and to "mess with these outdated laws and the authorities that enforce them," Lytle said.

The top "allows all women to support the Free the Nipple movement and make a statement for gender equality — even those who might not be ready for full exposure [or] who don't want to risk arrest and fines," Lytle said.

The couple, like the Free the Nipple movement at large, hopes to push back on the normalized cultural regard of women as inherently sexual objects that exist for the pleasure of others and are subject to their control.

"Once a woman claims ownership of her body and her sexuality, and possibly walks around topless, she is seen as shameful and indecent and offensive," Lytle observed. And other Free the Nipple proponents agree.

"You can objectify [women's] breasts, but a woman can't own her body," filmmaker and founder of the Free the Nipple movement Lina Esco told Mic in May. Activist Soraya Chemaly agreed that "this idea of hiding women up is as objectifying as stripping them naked."

The TaTa top bucks this standard by forcing onlookers to question what exactly is "so offensive and unsafe about a nipple, and what exactly this law is protecting people from," Lytle said. "If a woman is wearing a TaTa Top and appears as if she is topless, but her actual nipple is covered, she's not breaking any laws, but the second a real nipple is shown, she risks arrest? Wearing the top is a way to make a statement and get involved."

But the top also serves purposes other than questioning the sexualization of women's bodies and the double standard that surrounds them.

"We have mothers buying the TaTa Top because they are sick of being shamed for breastfeeding in public," Lytle said said. "We have husbands buying the tops for their wives who are breast cancer survivors and have undergone double mastectomies. We have women buying the tops to make a statement — to push boundaries in small, conservative towns. We have had customers who have been arrested for tanning topless on beaches and then they go back to tan in the TaTa Top and watch the same cops come over and the cops end up confused about how to approach the subject."

Lytle said they want to question these norms both societally and economically. They've partnered with the Pink Ink Fund — a nonprofit that offers financial assistance, education and outreach for post mastectomy tattoos — and Project Fierce — a nonprofit that aims to reduce LGBTQ youth homelessness in Chicago. But they hope to spread the wealth and rotate partners every three to six months to support a variety of causes.

"Small inequalities lead to larger inequalities," Lytle summarized. "The whole idea was to use humor to shed light on some serious issues regarding censorship and gender equality. ... It needs to change."