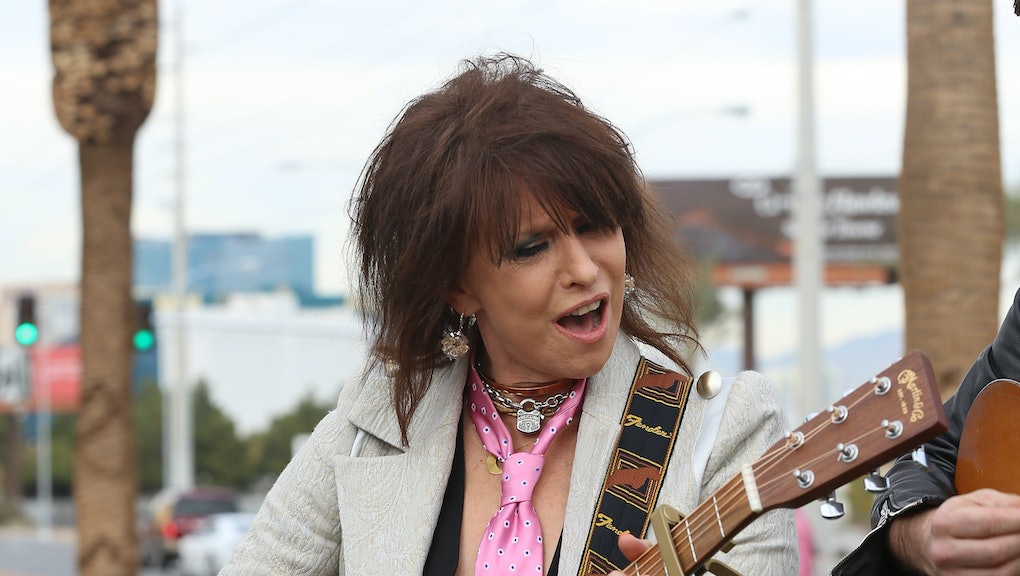 Chrissie Hynde, frontwoman of the Pretenders, the English-American rock band that produced hit songs like 1986's "Don't Get Me Wrong," said rape is can be the survivor's fault in a Sunday Times interview published this weekend. "If I'm walking around in my underwear and I'm drunk? Who else's fault can it be?" she asked.

During a promotional interview for her new memoir, Reckless, set to be released Sept. 8, Hynde blamed even herself for being the survivor of coerced sexual acts. Hynde described an incident from when she was 21 years old in her home state of Ohio, where a motorcycle gang member took her to a deserted house under the guise of going to a party and sexually assaulted her.

"Technically speaking, however you want to look at it, this was all my doing and I take full responsibility. You can't fuck about with people, especially people who wear 'I Heart Rape' and 'On Your Knees' badges," Hynde said. "Those motorcycle gangs, that's what they do ... You have to take responsibility. I mean, I was naive."

In Hynde's wider comments about rape survivors in general, she argued they can be at fault for "enticing someone who's already unhinged" if they dress or act provocatively.

"If I'm walking around and I'm very modestly dressed and I'm keeping to myself and someone attacks me, then I'd say that's his fault," Hynde told the Sunday Times. "But if I'm being very lairy and putting it about and being provocative, then you are enticing someone who's already unhinged — don't do that. Come on! That's just common sense. You know, if you don't want to entice a rapist, don't wear high heels so you can't run from him."

She concluded by suggesting rape survivors are asking for it when dressed immodestly: "If you're wearing something that says 'Come and fuck me,' you'd better be good on your feet ... I don't think I'm saying anything controversial, am I?"

The United Kingdom-based charity Victim Support quickly responded to Hynde's comments, saying blaming oneself can deter a survivor from reporting a crime.

"Victims of sexual violence should never feel or be made to feel that they were responsible for the appalling crime they suffered — regardless of circumstances or factors which may have made them particularly vulnerable," Victim Support director Lucy Hastings told the Guardian on Sunday.

Twitter users expressed similar disapproval, reinforcing the idea that rape and sexual assault are never the fault of the survivor.

One critic offered empathy, rather then censure:

Hastings explained the circumstances of sexual assault are frequently beyond a survivor's control: "They should not blame themselves or be blamed for failing to prevent an attack — often they will have been targeted by predatory offenders who are responsible for their actions."