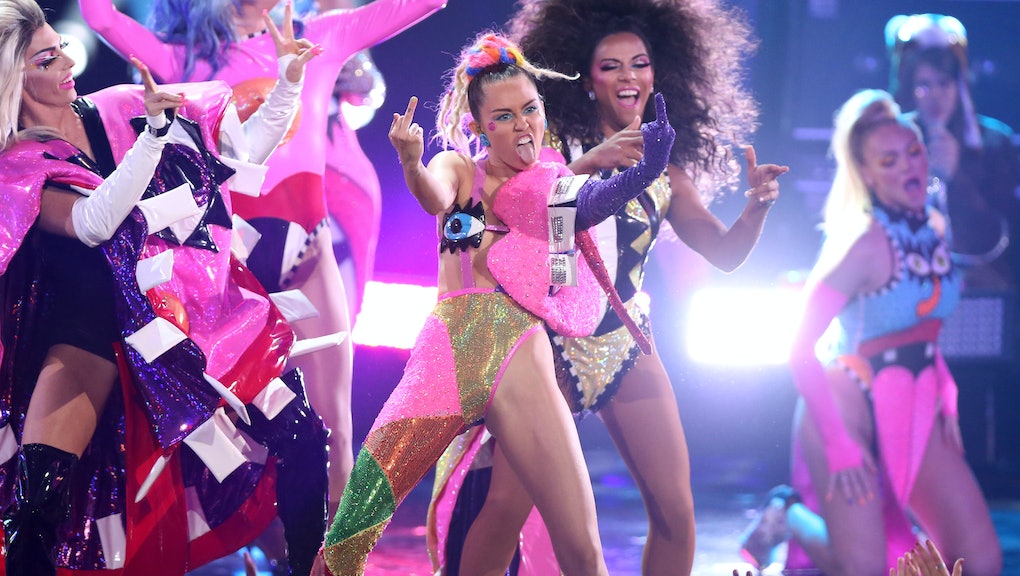 Miley Cyrus might have trumped Kanye West's presidential bid announcement at the close of the MTV Video Music Awards, when she announced her new album, Miley Cyrus and Her Dead Petz, would be available online entirely for free.

The 23-track album is a collaboration with Flaming Lips frontman Wayne Coyne and feels far from anything the 22-year-old pop star has released before.

The album is streaming at MileyCyrusAndHerDeadPetz.com. The site is just as psychedelic and colorful as Cyrus' 10 separate outfits at Sunday night's VMAs, with a photo of Cyrus bursting through a splash of paint and glitter as its banner image:

The album's lyrics seem to be from an entirely different state of mind, and perhaps even another era of music. Song titles include "Fuckin Fucked Up," "Bang Me Box," "I'm So Drunk" and "Miley Tibetan Bowlzzz." It's a modern hippie's anthem, a narrative of life that breaks away from the norm with high-quality beats and provoking lyrics.

"One Sun" explores concepts of time, love, the human impact on the Earth and global warming. "We all walk around and waste life, it's just gonna go on forever, like there's some eternal endless supply of what it takes to keep us alive," Cyrus croons over a fast beat. "There might be a day when everything goes away to remind us how ungrateful our culture is. We need to take time to replace what's stolen from Mother Nature."

The album highlights Cyrus' focus on social issues in recent years, including "Karen Don't Be Sad," an anti-bullying message with a clear compositional influence from Coyne's work with the Flaming Lips:

However, this is Miley Cyrus we're listening to, and the album comprises a healthy mix of positive messages and absolute recklessness. Cyrus is completely disgusted by her new fling in "BB Talk" due to his constant affection, or as the "Wrecking Ball" singer describes it, "fucking goo." "Fuck me so you stop baby-talking," she pleads to her beau:

"Alright so, I'm gonna be honest, it's the super cutey shit, that's the main issue here, I mean, I'm fucking what? Look, I like when you send me, you know, the, the queen emoji, but when I send back the monkey, you know, the ones with the, the hands over the eyes, that means that shit's just getting a little too weird for me."

Listen to Miley Cyrus and Her Dead Petz here.