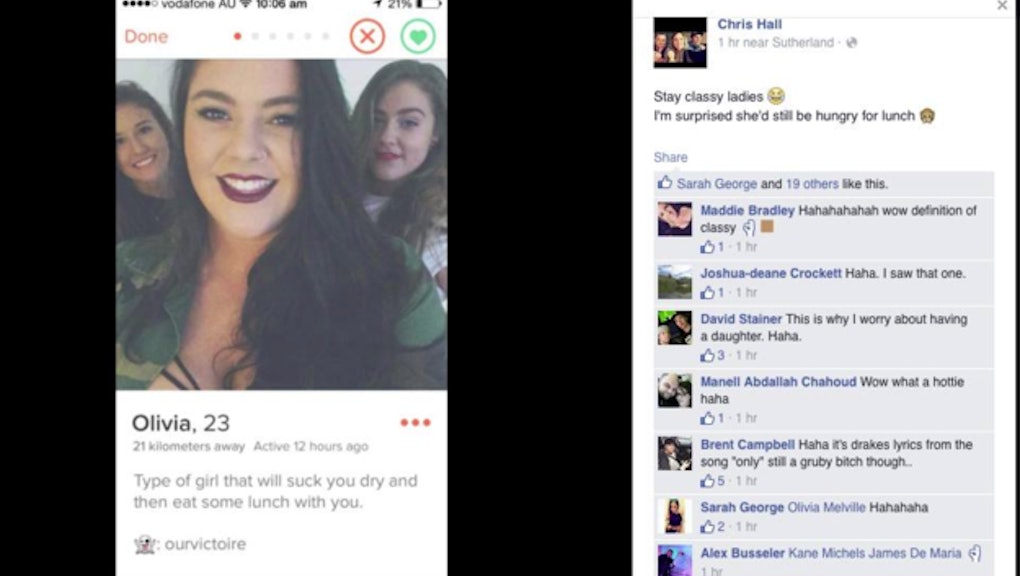 It is a truth universally acknowledged that the Internet is full of misogynistic scumbags. A group of Australian women recently learned just how awful online harassment can be after one of them became the target of a vile slut-shaming campaign on Facebook.

When Olivia Melville, 23, learned that a man named Chris Hall had posted a screenshot of her Tinder profile on Facebook, she received a deluge of insults and even rape threats from people on the Internet. Melville's sin? Using a Drake lyric — "Type of girl that will suck you dry and then eat some lunch with you," from his verse on Nicki Minaj's song "Only" — on her dating profile.

When Melville's friends stepped in to defend her from the violent and sexist comments, they received graphic threats as well.

One of Melville's friends, Paloma Brierley Newton, told BuzzFeed that Melville contacted the police the day of the incident, but law enforcement officials didn't respond to her until a week later. When they did, Newton said police told her "they were investigating the people that delivered the abuse — but the whole thing could take another three weeks."

Melville and the other women are refusing to wait that long. Instead, they're taking matters into their own hands.

Standing up against slut-shaming: Melville, Paloma and nearly a dozen other women have started Sexual Violence Won't Be Silenced, an organization aimed at raising awareness of cyber-bullying and online sexual violence. They've also launched a petition asking the Australian government to better train and educate law enforcement officers to prevent and punish violent harassment on social media.

"One in four young women have experienced online sexual harassment," the petition states, citing a 2014 Pew Research Center finding. "There are currently few education programs in place that enable law enforcement professionals to respond appropriately to online harassment and sexual abuse. [...] We're calling for better training and education for law enforcement professionals, so that they can address harassment online."

This abuse is all too common. Targeting women on the Internet for extreme and graphic harassment is sadly all too common. A 2014 Pew Research analysis found that a quarter of young women between the ages of 18 and 24 had experienced online sexual harassment and 26% had been subjected to online stalking. Of all the women who said they had experienced abuse on the Internet, 38% called the attacks extremely or very upsetting.

The threats, which often include death threats, aren't always confined to the Internet. Last year, feminist media critic and blogger Anita Sarkeesian, a frequent target of abuse, was forced to cancel a speaking engagement after someone threatened to open fire at the event.

"I don't like the words 'troll' and 'bully' – it feels too childish," Sarkeesian recently told the Guardian. "This is harassment and abuse."

Slut-shaming is just the beginning. Even comparatively mild harassment, such as Hall's initial slut-shaming and policing of Melville's sexuality, have become commonplace. Such cyberbullying often results in an online culture that reduces women to their sexuality and diminishes their humanity.

As Melville's experience illustrates, such slut-shaming can have dire consequences, especially when law enforcement fail to intervene. By refusing to treat threats as credible, the police condone a cycle of sexism and violence.

"This kind of behavior is what we call 'normalization of violence against women,' and it is really, really scary and damaging," Newton wrote on Facebook. "It is the reason that every day our mothers, our sisters and our friends are killed by men and raped by men."

"Every time you 'playfully' tell a woman to get back in the kitchen, every time you smack a girl on the bum because its funny, every time you make a joke about rape," Newton wrote, "you are contributing to a society where unfortunately women are not safe."