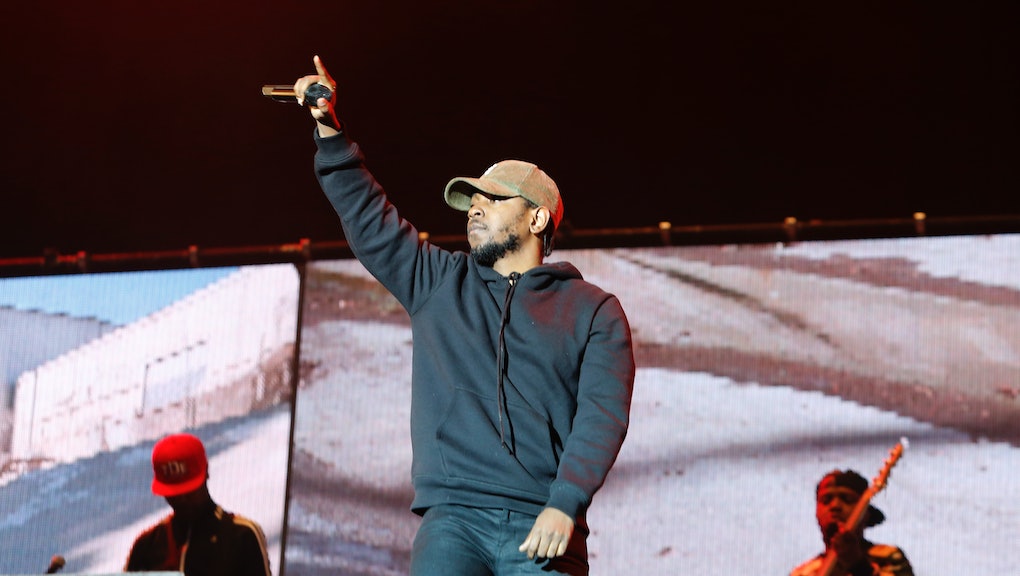 If the VMAs Were Really About Music, Kendrick Lamar Would've Won the Night

The videos nominated for video of the year at the MTV Video Music Awards on Sunday could not have been more distinct.

All were worthy candidates, but MTV did what we all should have seen coming a mile away. It awarded video of the year to the gaudiest, most expensive and overwrought option of the five: "Bad Blood." In doing so, MTV overlooked some truly incredible artistic achievements, and chief among them was Lamar's work.

Though Lamar technically did win as a featured artist on the "Bad Blood" remix, his own work deserved the win far more. His "Alright" visuals are as bold as a thriller flick, with the subtlety of poetry and an inventiveness that borders on genius. But it didn't have celebrity guests or a ton of explosions, and therefore its chances of winning on the VMA stage were small.

"Bad Blood" was crafted to slay at the VMAs. It came with a ton of star power, from Gigi Hadid to Selena Gomez to Karlie Kloss, many of whom Swift brought as her personal VMA entourage. They followed her around throughout the red carpet pre-show, standing slightly to the side as she gave her interviews, and taking the stage with her when she won. It was a power-packed red carpet lady squad, offering easy publicity for all.

The video also increased its odds with a mashup of pop culture storylines. When the video dropped, the Daily Beast described it as "an anthem fit for Regina George" for the way it turned Swift's personal conflict with Katy Perry into a full-on revenge fantasy.

It turned the type of cat fight the media loves to fetishize into an all-out cat war. Nothing about the video spoke to the feminism that Swift touts. And when there are real wars taking place in our world that need artistic exploration, it showed that the artists brave enough to explore them will get nothing but snubs.

We're gonna be "Alright." Police brutality and institutionalized tyranny are not the sexiest topics, but Lamar dealt with them in an highly arousing way in the "Alright" video, crafting a symbolic language to relay his message. In one of the most striking shots, he offers a glimpse of a fantastic, inverse world where instead of gunning them down in their cars, like Samuel DuBose, police treat like young black men like kings. It helps meld the tragedies scattered throughout the piece into a rousing call to action, reflected in the song's chorus: "We 'gon be all right."

Though the video never generated the buzz of the "Bad Blood" video, it started its fair share of conversations. Lamar performed "Alright" at the BET Awards from on top of a graffiti-tagged cop car, thus making the song a subject of yet another Fox News debate about whether hip-hop is ruining the fabric of American life. On a segment of The Five, Fox's newscasters said the song is "counterproductive" and "incites violence" — none of which made any sense to Lamar.

"How can you take a song that's about hope and turn it into hatred?" he told TMZ Live. "The overall message is, 'We're gonna be alright.' It's not the message of 'I wanna kill people.'"

The video is designed to uplift. Lamar maintains a knowing, Zen-like smile throughout the trauma he sees. He acknowledges the pain and reveals the tragedy of black life in America while encouraging his listeners to continue the fight for freedom and safety. The images he used to communicate that with perfectly capture the hallowed, urgent feel of his critically adored To Pimp A Butterfly.

Swift's video, contrastingly, is designed to belittle. It acts out an elaborate, absurdly violent revenge fantasy. But since it features a harmless-looking white woman, it presents no troubling connotations to the mainstream media. Swift's video is palatable and fun; Lamar's is too real. The VMAs' results clearly reflect the same, despite Lamar's "Alright" being a far superior artistic achievement. He truly crafted one of the best videos of all time.

(Where is Kanye when you need him? Off announcing his bid for presidency.)