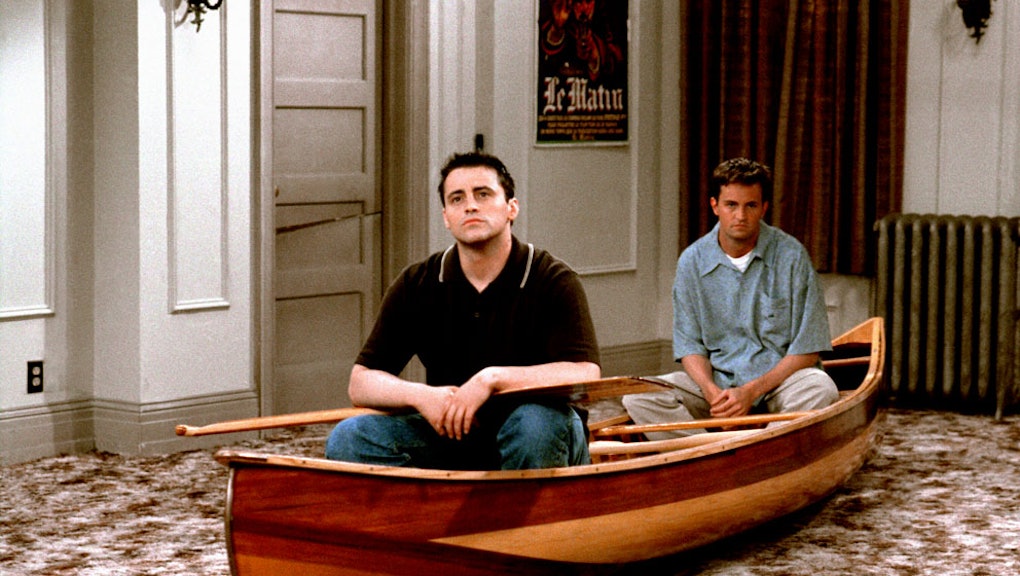 Living with roommates can be pretty terrible. They leave their dishes in the sink, never take out the trash and sometimes eat your entire block of cheese. But, often, cohabitation is necessary, especially in cities where space is tight and rent is high.

During the recession, more and more young adults lived with roommates than in previous years. But as the economy has improved, something curious is happening: Millennials are still opting to live with other people. What's more, they're not feeling shame or stigma for their living situations. Instead, they're making a conscious choice to live with roommates.

We've traditionally thought of having a roommate as a necessary evil for poor, lonely singletons who can neither afford a one-bedroom apartment nor lock down a live-in partner. But as young people continue to move in with one or two or even four or five roommates, it's time to acknowledge that having a roommate isn't a sign that you're not a real grown-up — it's actually an important symbol of maturity.

Living with people means knowing ourselves. It's one of the harshest truths of adulthood: Making friends after college is really hard. Even though millennials place a high value on workplace friendships, having relationships beyond the office is crucial to personal development. Roommates are an easy fix to the age-old problem of finding the time to make and maintain new friendships.

"In the best scenarios, I have become closer with the people I live with as time goes on," 25-year-old Rachel, who lives with two other women named Rachel, told Mic. "Living with roommates can expand your social circle and/or give you exposure to people that you may not have gotten to know otherwise."

In Rachel's case, that means living with roommates she met at work, both of whom grew up across the country. For others, that might mean shacking up with a random person from Craigslist, which can have its benefits as well: According to one study, sharing a living space with someone of another racial or cultural background can help people diversify their friendships.

The people we live with aren't always our buddies, though. Sometimes they're just people we're required to interact with. That can be enormously beneficial for those who might not be inclined to socialize once they leave the office, especially if their roommates tend to be happy people. Research shows that being surrounded by happier friends or roommates can increase a person's chances of feeling good themselves.

"There was something kind of nice about having to come home without being able to retreat to my bedroom," Jill*, 26, who now lives with her significant other, told Mic. "I would have to sit on the couch with my roommate so we could talk about our days for, like, 10 minutes every night. Having someone there doesn't let you isolate yourself as much as you would otherwise."

Lindsay, 25, agreed. "I am not extroverted, which is why I like having people around who I can hang with without having to make an effort," she said. "Also, if you come home to an empty house all the time, it's depressing. But if you come home to a house where your roommates happen not to be there, it's the best thing ever."

Having roommates is just another way of trying to get our shit together. Being clean, timely and responsible is, for so many of us, the kind of hard work we want to stop doing as soon as we get home. But if you're wont to leave your dishes in the sink or never take out the trash, a roommate will be quick to call you out on your shit. Living with other people pressures us to keep it together.

"Having roommates doesn't stop you from being a hot mess, but it requires you to answer for being a hot mess," 24-year-old Erica* told Mic. "It teaches you to be responsible for your behavior in a way that living alone doesn't. I do think it teaches you how to be an adult, really. I am immediately suspicious of people who say they can't live with anyone else."

Cohabiting is also the best way to test if our parents actually taught us all the critical Grown-up Stuff we need to know to run our own households. "My feeling is that living with roommates who aren't romantic partners takes a lot more communication and coordination," Rachel said. "You have to organize bill-paying, chores and other things that come with a shared living space."

Millennials are redefining adulthood anyway. The concept of emerging adulthood is a new one, and it's something today's young people have the fun task of redefining. Placing greater emphasis on our careers and delaying marriage and parenthood are just parts of this period of exploration; taking the opportunity to create the sorts of living spaces we want, whether they're traditional or not, is another.

Having a roommate can help us walk the fine line between being a grown-up and being an old. It also allows us to retain individuality that is central to defining ourselves as young adults, in a way that living with a partner or a family does not.

"If I lived just with my boyfriend, I would feel too grown-up and married," 25-year-old Corey*, who lives with both her partner and a roommate, told Mic. "I like sort of feeling like I'm still in college and having random people in and out of the house, because I am very extroverted and like having lots of friends around."

Shared living spaces can feel more like a home than anywhere else, and the roommates who live with us can make those spaces feel safe. At the very least, they can remind us that we aren't totally alone.

"You can't stay home and watch Netflix on Friday nights and be OK with it," Lindsay said, "unless your roommates are there with you."