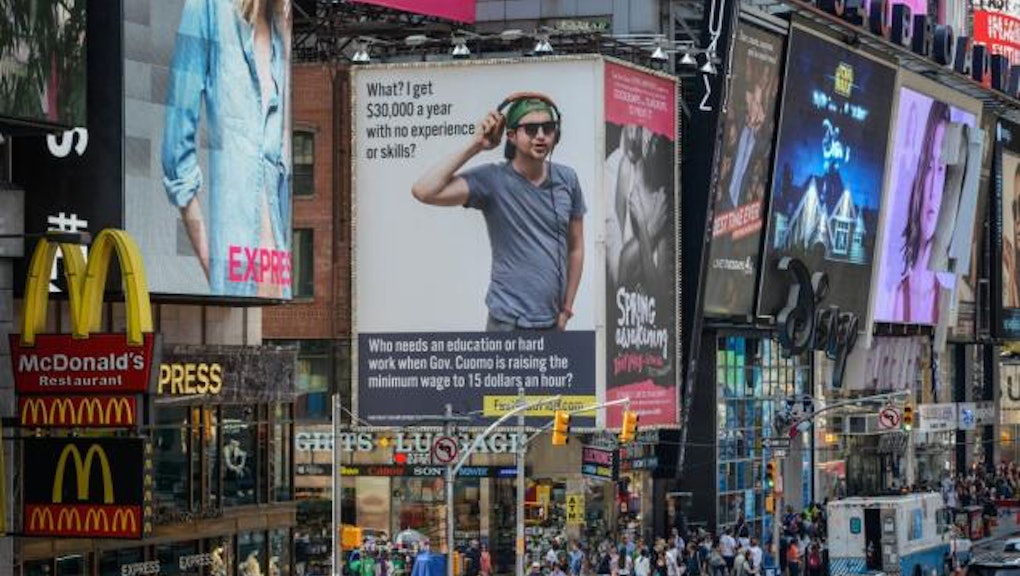 "What? I get $30,000 a year with no experience or skills?" a sunglasses-wearing hipster in the ad, located near West 46th Street in Manhattan, exclaims. Below, the ad asks viewers "who needs an education or hard work when Gov. Cuomo is raising the minimum wage to 15 dollars an hour?"

As Gothamist reports, the ad comes from the Employment Policies Institute, a restaurant-industry-funded group managed by PR operative Rick Berman. Berman has historically worked for a variety of ethically questionable industries, including cigarette firms and companies that make unhealthy food, earning him the nickname "Dr. Evil" from opponents.

"In a survey this summer of 301 employees who earn $12-$15 an hour, 46 percent opposed a law that would require entry-level employees to be paid the same wage that they earn," a statement on the linked website reads. "It's understandable: A majority of these employees had two or more years of job experience and at least some college education, suggesting they wouldn't be thrilled at a new law that allows people with neither of these characteristics to earn their same wage."

It's true that some economists are skeptical of a $15-per-hour minimum wage specific to the fast-food sector, instead of one that applies to all employees. However, the ad attacks all low-income workers as both eager for a handout and undeserving of a higher income, relying on cheap stereotypes to make its point.

"An accurate billboard would show a 23-year-old woman (23 is the median age of fast food workers) perhaps Latino or Black, saying 'now I can actually afford to feed my family/finish the college degree that was the reason I got this job to begin with.'"

Hiltonsmith says there is no evidence to back the idea a higher minimum wage encourages slacking in the workforce, citing studies that indicate countries with higher minimum wages have lower rates of turnover and higher per-worker productivity.

"Full-time workers with bachelor's degrees earned an average of $27.10 an hour, not to mention the additional job security, fringe benefits and recession-resistant employment that comes with a 4-year degree," he added. "So, I think there's still just a small incentive to go to college even with a $15/hr wage."

In New York in particular, $15 doesn't go very far, either. A recent report by the National Low Income Housing Coalition argued that for a New Yorker to afford a two-bedroom apartment at market rates, they would need to make $25.67 an hour. Nationally, 42% of the U.S. workforce makes less than $15 an hour, and those who make those lower wages tend to be female and black or Latino.