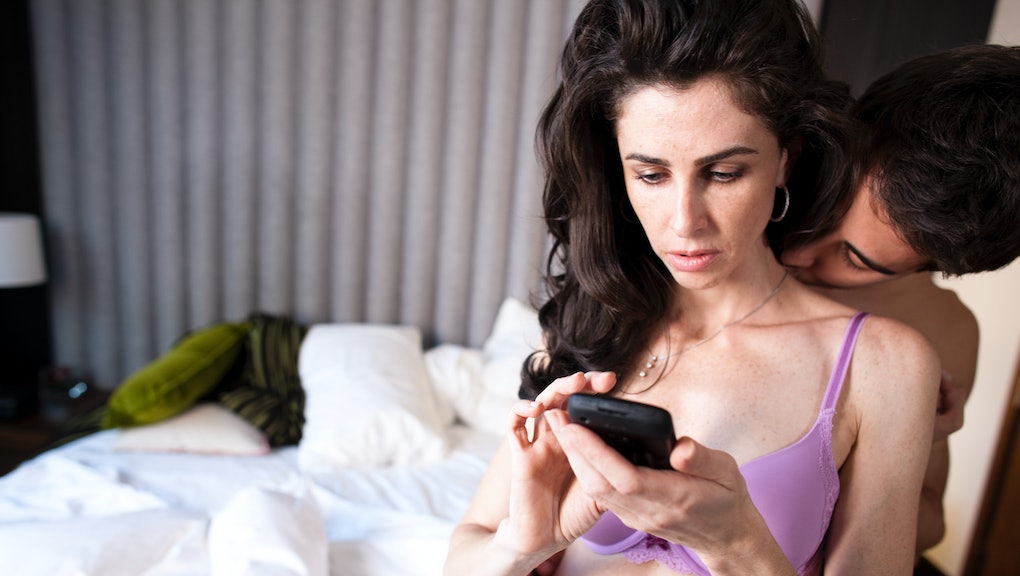 When Sexting Is Cheating — and When It Isn't

I didn't confront him about it, because, to be honest, it didn't seem like a big deal. After all, the fact that he'd swiped through Tinder wasn't evidence of infidelity in itself, and, to be honest, I was guilty of doing the same thing at some point as well.

Was my ex's mysterious matches an act of betrayal or simply harmless flirting? The answer to that question is one of the many negotiations required in a relationship, and sometimes, it's more complicated than you might think to determine what crosses the line.

Most of this behavior is rooted in pure fantasy. Thanks to the Ashley Madison leak, online infidelity is a hot topic. But recent data revealed while there were a handful of women on Ashley Madison, women rarely used the website beyond creating an account.

The takeaway is clear: The men who kept Ashley Madison alive were getting off on simply having an account and sending messages, but they were likely rarely meeting up with potential paramours in person. Many were likely getting off on the fantasy of infidelity, rather than infidelity itself.

Pat*, 31, said he often logs onto hookup apps out of sheer curiosity, just to see what else is out there, but he's never actually met up with anyone in person. "When things are going shitty with Beth [my girlfriend], or we've been fighting, sometimes I'll download Tinder just for a few hours to see what else is out there," he told Mic. "Nothing ever happens, but it makes me feel better."

It makes sense why people in relationships would download Tinder after a fight with their girlfriend or slide into an ex's DMs after a rough day at work and a night of heavy drinking. According to Ken Page, psychotherapist and author of the book Deeper Dating: How to Drop the Games of Seduction and Discover the Power of Intimacy, both online flirtation and IRL infidelity are often rooted in ego. "So much of cheating is actually making sure you're still attractive," he told Mic.

Furthermore, it takes a lot of work to actually turn Tinder swipes into an actual affair. Once you've actually slept with someone you've met online and their polished and proofread profile has evolved into an adult human with dirty underwear and a hatred for your cat, an impulsive decision to cheat on your partner seems far more unattractive. In the end, many people who are coupled-yet-swiping aren't truly looking for anything beyond a digital diversion.

That said, there's a danger of a digital flirtation evolving into an IRL encounter. While technology makes it easier for people to flirt without actually crossing any physical boundaries, things rarely play out as we expect them to.

"In one of my older relationships, when things were fading, I reconnected with a high school ex," Erin, 26, told Mic. "Friendly emails escalated to dirty talk ... and I ultimately did, in fact, sleep with him."

Such extended, emotional electronic communications are a different ballgame from a few right-swipes while sitting on the toilet. In fact, a 2013 study from Texas Tech University concluded that online infidelity is just as hurtful to the partner that was cheated on as actual infidelity. That's probably because online flirtation is usually a sign that something is amiss in your relationship.

"[People] cheat for good reasons," Page said. "They're not getting their needs met."

That said, traditional monogamy isn't easy — and for some couples, sexting or flirting online can serve as an outlet for their extramarital urges. For Pat, swiping right through Tinder is nothing more than a fleeting assurance of his fuckability. "After a few matches on Tinder, I'll delete it from my phone," he told Mic. "It's a reminder that there are girls that could be into me, but also that I'm not actually interested in going there."

Idly swiping through Tinder while your partner is napping might seem harmless, but Page warns that it can be a breach of trust for many couples. "It's really simple," Page said. "If you feel like you may be bending the rules, then you probably are ... That means that you're doing something that is damaging the trust in the relationship."

Technology has made it easier than ever to cheat. Thanks to technology, when it comes to sex, we can pretty much find whatever we want, whenever we want — be it subreddits to make us feel better about our foot fetishes or the right couple to swing with. However, if you're in a relationship, at some point you're going to have to figure out what constitutes as cheating, and that involves having a much-needed but perhaps awkward conversation with your partner.

Infidelity is like feminism: Everyone has their own idea for what it means to them. And when it comes down to it, couples need to to figure out what their individual boundaries are. One couple's harmless Grindr swiping could signal the end of another couple's relationship.

"Different couples have different rules," Page said. "And a polyamorous couple would have very different rules. So the big question is: What are the essential rules of safety in the relationship? So many couples don't talk about that clearly, and every couple needs to."

When my ex and I searched for another woman on Tinder, our search was successful: We ended up meeting another woman and sharing a bed with her. But it didn't go down quite as I'd anticipated. In the process, I learned that I was much more monogamous than I thought I was, and I ultimately became emotionally attached to her.

While the experience was exciting, it was ultimately damaging to my relationship. Like Erin, who thought a friendly email to her ex would never lead to anything, my partner and I didn't fully understand what to do after our fantasy became a reality.

When things get rough in a relationship, it's sometimes easy to ask yourself: Am I throwing this away because finding someone new seems one download away? Or am I staying in a dying relationship out of fear of being alone? By talking to your partner about what constitutes as cheating, instead of sending that topless photo or downloading Tinder or Gchatting your toxic ex, you confront that question head-on.

"A relationship is a precious thing," Page said. "It's really hard to come by. There are a million forces breaking couples apart. I'm in favor of couples trying to stay together."