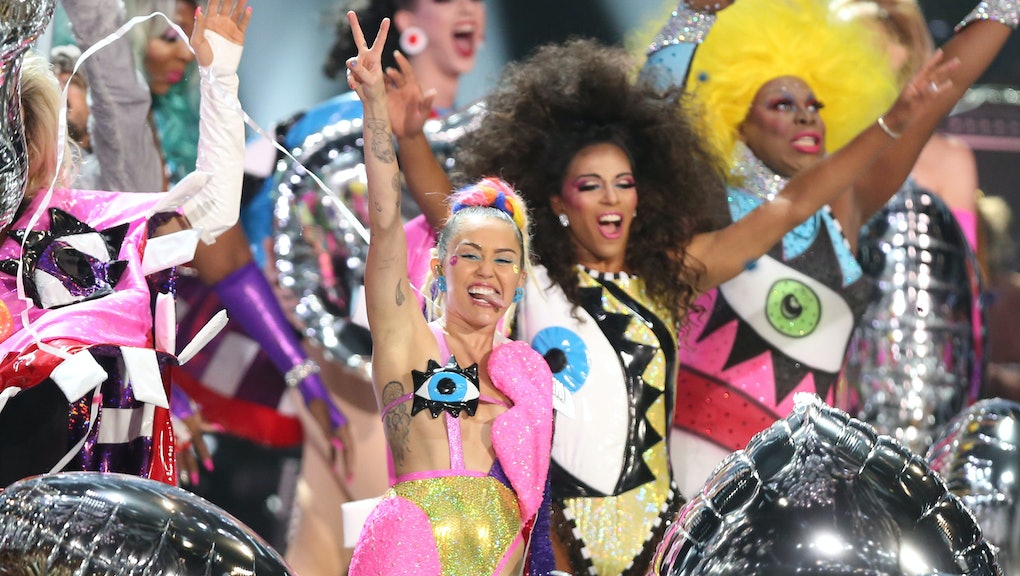 Miley Cyrus was a hot mess hosting Sunday night's MTV Video Music Awards. While slipping in and out of 11 of the most absurd outfits to ever grace a human body, Cyrus vacillated between being wildly offensive, cheekily narcissistic and downright confrontational. All of her high-energy sloppiness came to a head during the final, surprise performance of her new song, "Dooo It," alongside members of the Flaming Lips and dancing drag queens from RuPaul's Drag Race.

It was a perfect amalgam of all her technicolor weirdness, an unabashed display of self celebrating gender fluidity and artistic expression in an explosion of lewd color. Right at the end, she one-upped herself again, announcing that her new album Miley Cyrus and Her Dead Petz was available to stream for free on her website.

The number of people that rushed online to hear it immediately jammed the site. Only a lucky few got a chance to hear it Sunday. That mad dash has since calmed, however, and now we can see the album for what it really is: a sonic representation of all Miley Cyrus stands for today.

This is anything but Bangerz. Cyrus' last album was a clean, hip-hop-tinged pop power-play. Bangerz achieved everything a pop album should: a Grammy nomination, a platinum plaque and a record-breaking video. Miley Cyrus and Her Dead Petz won't get any of those.

In exchange, this record offers something arguably more valuable. It offers evidence that Cyrus is not only interested in pushing the FCC broadcasting boundaries, but artistic ones as well. On Miley Cyrus and Her Dead Petz, she does both.

"People were like, 'Well, she's got some good people twisting the knobs to help her break out,'" Cyrus told the New York Times, discussing her humble beginnings. "Now it's been long enough where they're like, 'No one's telling her what to do.'"

Just a brief skim down the track list reveals everything is straight Cyrus, zero filter. Industry executives looking for a platinum hit would be hard-pressed to approve a lengthy 23-track album, filled with song titles like "Fuckin Fucked Up," "Bang Me Box," "I'm So Drunk" or "Milky Milky Milk," the last of which listens like an extended psychedelic, sexual fantasy.

"Bang Me Box" functions similarly as a graphic narration of a lesbian sexual encounter. "You say it tastes like cake with my lips against your face I want you to eat it baby," she sings over a plodding '60s warped R&B groove, describing the frosting-and-sprinkles-strewn image that make up the album's cover.

Thankfully, RCA decided to stay out of her way.

Crafting her new sound: One of the biggest signs she's abandoned the pursuit of pop superstardom is her shift in collaborators. Hip-hop producer Mike`Will Made It, the man behind some of Future, Rihanna and Juicy J's biggest records, executive-produced her last project. For this project, she tapped Wayne Coyne of the Flaming Lips.

She describes Coyne simultaneously as her muse and her pet in her New York Times interview. Apparently, Cyrus' dog, Floyd, was killed by coyotes while she was on tour in 2014. While mourning him and simultaneously recovering from an allergic reaction from antibiotics, "a Chinese healer," as the New York Times describes, induced a vision in which she apparently saw Floyd lifted out of her lungs and placed on her shoulder, where she pet him for a few hours.

"I really think, in a way, [Floyd's] energy went into Wayne's energy. What he was to me, Wayne has become," she said.

Coyne helped Cyrus channel some new energies into her music. A lot of sounds of the project sounds much like the Flaming Lips, with remnants of Cyrus' pop sensibilities still creeping in.

The album's second track, "Karen Don't Be Sad," sounds like something right off the Flaming Lips' Yoshimi Battles The Pink Robots. Cyrus folds in some of her anti-discrimination work she's performed with her Happy Hippy Foundation, encouraging the titular character to standup to her bullies. "Karen don't be sad / They're just a bunch of fools," she sings. "And you can make them powerless / Don't let them make the rules."

Not every song works as well. "Something About Space Dude" drags, and Cyrus sounds bored singing over the spastic dance beat in "1 Sun." Miley Cyrus and Her Dead Petz is hardly a masterpiece, but it might be something even more important at this stage in her career: a raw glimpse at an artist going a through gloriously messy, but vital, creative transition.