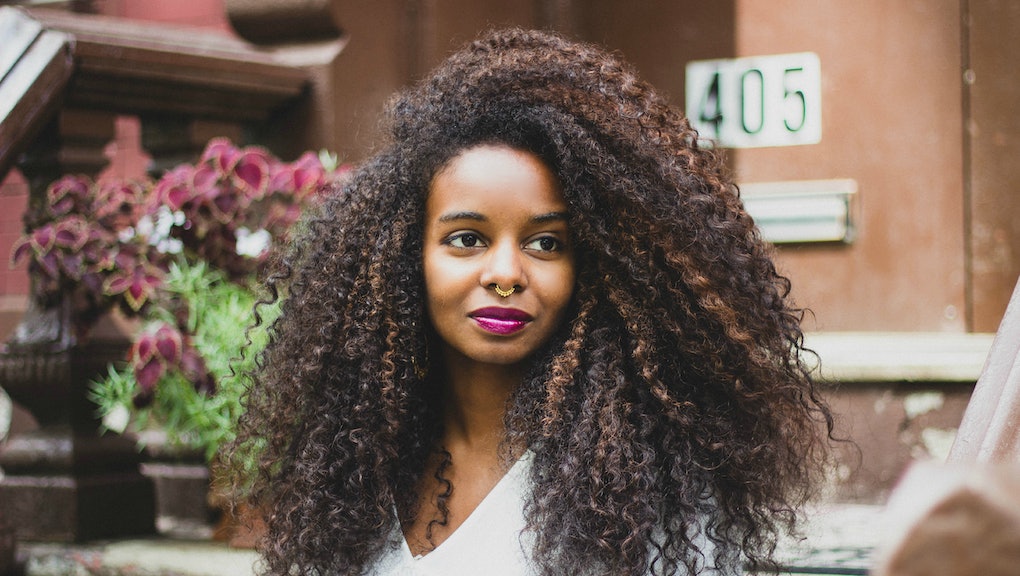 Sunita V.'s hair is big enough to have its own personality, which means it can get temperamental. There are days when the wind blows through it and it expands, refusing to stay in place. There are also days when the rain kisses it and it falls gently to the side.

"It's funny, I think there's me and then there's my hair," the New York City-based style blogger told Mic. It explains why the description on her Instagram account, which has over 33,000 followers, begins with a simple declaration: "Big Hair."

That thick, curly and frizzy hair is very much a part of her identity now, said Sunita, who likes to go by her first name for privacy. Her hair, big and beautiful when left untouched, has inspired other women to embrace their natural hair texture, from strangers who email her to close friends who've given up on straightening altogether.

Ironically, Sunita herself took a little longer to accept her hair. Up until two years ago, she didn't even know what her hair looked like in its natural state. She'd braided, straightened and done away with her natural curls her whole life — the result of pressure and scrutiny that too many women face for hair that looks "different."

A hair discovery, years later: A native of Wisconsin, Sunita said she grew up surrounded by women with mossy brown, straight hair. Her hair was usually tied back or braided as a child. When she finally did let it down, she was already in her teens and regularly straightening it.

It was part of Sunita's effort to not draw more attention to herself, she said. As a child, her looks and mixed racial background made her a target for ridicule and bullying, leaving her with "stories for days," she said. There was the time she wore her hair down for her sixth grade I.D. photo and a classmate called her a witch. There was the kid who was fond of calling her "butt-fucking-ugly." The experiences soured her view of her hometown, she said, as well as her own looks.

"When you're a child, nothing is more influential than your peers telling you things about you," she said. "It killed my confidence."

The result was an introverted personality that left little room for experimenting with her look. "You try to minimize yourself," she said. "I didn't want to do anything that would like give anyone else any more fuel to say hurtful things."

Feeling comfortable is feeling powerful: Sunita put down the straightener two years ago, when she simply got tired of the hassle, she said. Her friends and boyfriend encouraged her new look and, slowly, she began discovering her true hair texture for the first time. It's been an empowering experience ever since.

She's most comfortable with her hair down in its natural state. If she had it her way, that's how she'd wear it every day. These days, Sunita's hair has plenty of admirers, too, and she's occasionally stopped on the street with a compliment.

"But at the same time," she said, "being a woman and walking down the street by yourself in New York, it's not comfortable." She often wears it up in a large bun to minimize potential street harassment, she said. Too many men have touched her hair or grabbed her; there are occasionally women, too, who have mocked her for daring to flaunt her "beautiful hair," she said.

So she lets her hair down only when she's with her boyfriend and close friends — and, ironically, online, where there's even more freedom. It may be more public than even a city sidewalk, but there lies a supportive community of fans, including many who are actively celebrating their own natural hair.

Offline, organizations like the Curly Girl Collective host events like Curlfest in Brooklyn, where people enjoy "a mecca of Afros, Twist-Outs, Curls (and Beards!) set to a soundtrack of chill music and positive energy." Sunita, who attended for the first time this year, said she felt at home with so many other women who've embraced their natural look.

Be yourself — whoever that is: As Sunita falls in love with her own hair, her goal isn't to convince everyone they need to go as big as she has, she said. While some girls might comment on her posts with the hashtag #hairgoals, Sunita said she hopes the right message comes across: Embrace your natural beauty, whatever that may be.

As for Sunita, she said she's perfectly happy with every aspect of her hair, even if it doesn't take too kindly to being tied down.

"I broke two hair ties today," she said, "but it's all good." After all, it's just a reminder of how her hair isn't just pretty: "It's big, powerful — amazing."