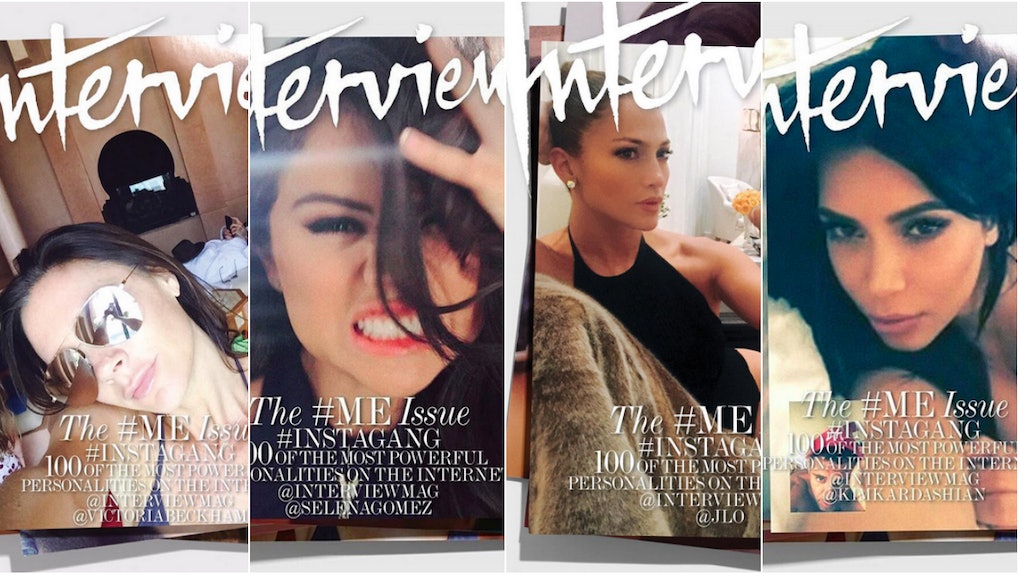 It Finally Happened: An Entire Fashion Magazine Is Dedicated to Selfies

In 2013, the Oxford Dictionaries proclaimed "selfie" the International Word of the Year. In 2014, fashion model agencies started scouting via selfies. This year, Kim Kardashian enshrined a lifetime of selfies in a nearly 450-page book, Selfish, and the fashionable Met Gala reportedly tried banning them. And let's not even get started on the proliferation of selfie sticks in 2015.

So it only makes sense that a fashion magazine has now dedicated an entire issue to our generation's obsession with the #selfie. Interview's September issue, which focuses on Instagram, has eight different covers featuring selfies from celebrities like Madonna, Selena Gomez, Miley Cyrus and Kim Kardashian.

"We just asked people to imagine their ultimate self portraits — whether it was highly produced or a simple selfie," Interview editor in chief Keith Pollock told Women's Wear Daily. "We wanted to see how they see themselves and how they want to be seen. We allowed each subject to imagine their own shoots."

The result: a wide variety, with some looking highly staged (hey there, J.Lo) and others more spur-of-the-moment.

Interview introduced the gallery of celeb selfies online with a reference to Andy Warhol, the magazine's founder who famously noted, according to legend, "In the future, everyone will be world-famous for 15 minutes." The magazine wrote:

"Well, it's the future, Andy, and you were right. Everyone is, if not world famous exactly, at least on air. On YouTube, in our tweets and 'grams, we are each of us broadcasting 24/7 the reality show of ourselves — projecting the "we" we see or would like to be. In celebration of that public image, we've invited a gang of our favorite people to share a personal picture of their own making."

That's the power of #selfies — the ability to completely control how others view you. That might be a foreign concept for the fancy fashion industry, where images have historically been tightly edited for a very specific effect. But today, the preference is for photos that showcase an unfiltered (er, #nofilter) raw appeal.

For proof of that, just check the place where fashion is really living: not in magazines, but on Tumblr and Instagram, where women and men can both take in the clothing, hair and photography that inspire them and, importantly, show off their own.

The stars on Interview's eight covers are, well, stars. But by letting selfies finally overtake the last frontier of the fashion elite — the September covers — perhaps fashion is shifting to a more democratic place after all. Are selfies of "real," non-model women next?