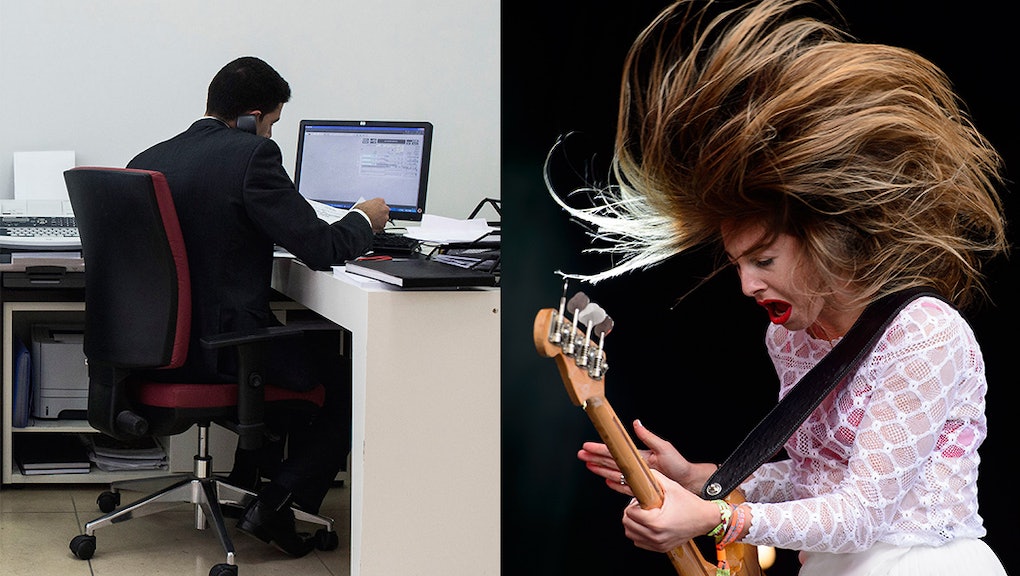 Centuries in the future, when our present-day selves are depicted as wax statues in museums, they'll probably come with little wax desks and little wax monitors. Our spines will be curled forward like macaroni noodles, our torsos will be paunchy, and though it would be hard to depict in wax, our brains would be cloudy and glum. That's because we're a nation on its rear: According to data from the Bureau of Labor Statistics, six of the seven most common well-paying jobs in the United States involve working in an office.

After the deluge of studies showing sitting's ill effects, these health risks shouldn't come as a surprise. Sitting all the time with crappy posture — slumped over, neck bent, feet not firmly planted, arms akimbo — can mess up a lot of things in your body. These problems go far beyond your ability to stand up straight: They hit your circulation, your brain and even your sex life.

So while working on your feet may seem grueling, working a sedentary desk job is slowly and quietly wearing down your body. Here are the effects from the top down.

This is your brain on sitting

Your brain needs oxygen to stay sharp and not turn into a cloudy mess of gray matter just floating listlessly in your skull. According to Murat Dalkilinç, a TED-Ed speaker and physical therapist based in Abu Dhabi, United Arab Emirates, when you sit and slouch, your spine curves, cutting out space for your lungs to expand as you breathe.

When that happens, you aren't taking big, full breaths, and that reduces the amount of oxygen getting to the blood in your extremities. When that happens, oxygen doesn't go to your brain, which leads to difficulty concentrating — and here you probably thought it was laziness that made sitting bad for your thinking.

Sitting wrecks your neck. Plenty of people working on the Internet can attest to this: Not only are you probably looking at a computer screen for 10-plus hours a day, but you're probably also doing it on a laptop, which forces you to look down instead of straight ahead.

A spinal surgeon named Kenneth Hansraj published a study in November 2014 called "Assessment of Stresses in the Cervical Spine Caused by Posture and Position of the Head," which looked at, among other things, what impact looking down at a screen, like a smart phone, has on your neck. He found that, even when standing up perfectly straight and doing everything you're supposed to be doing in terms of posture, your neck is still carrying 10 to 12 pounds of noggin, balancing it and keeping it from whipping around your shoulders like an inflatable man at a used-car lot.

Yes, "text neck" is a thing. As you start to bend your neck forward to look down, the amount of weight increases. By the time your neck is at a 60-degree angle, Hansraj writes, your neck is holding 60 pounds, or about the weight of a golden retriever. That is, of course, a severe angle, and probably wouldn't happen unless you spend the whole day looking down at your phone. (Oh, wait — we all do that.)

Your heart hates sitting. Here's where things get scary.

Sitting for prolonged periods, or subscribing to what could be called "sedentary behavior," can increase your risk of health complications and heart disease, Dr. I-Min Lee of Harvard Medical School, said in a Harvard Health Blog post.

And according to a correlating study, researchers found higher rates of type 2 diabetes, cancer and cancer-related deaths in people who spend most of their time not fully engaging their bodies. A study published in the Journal of the American College of Cardiology confirmed that prolonged sitting time, as in 10 hours versus five, increased the risk of cardiovascular disease in postmenopausal women, even if they had no history of heart disease.

Sitting may have a link to cancer: Studies like Dr. David Dunstan's "Sedentary Behaviour and Risk Co-Relation to Cancer and Mental Health" showed that sitting allegedly increased the chances of colon cancer by 30%, lung cancer by 54% and uterine cancer by 66%, though it's acknowledged that more research is needed.

Another study, published in the Journal of the National Cancer Institute, found that, with every two-hour increase of time sitting, the risk for different cancers rose at different rates: 8% for colon cancer, 10% for endometrial cancer and 6% for lung cancer. Scarier still, according to the study, the effects were present whether the study subject was otherwise physically active or not.

Sitting makes all those crunches you do at the gym pointless. Your mom knew what he was talking about when she told you to sit up straight. But she probably never told you slouching was sabotaging your efforts for a strong physique and a sturdy core.

"When we talk about posture, it's not just about the loss of core musculature,"  Dr. Brad Thomas, orthopedic surgeon at Beach Cities Orthopedics in California, told Mic. "It's the loss of pelvic control, too. Your hamstrings attach to your pelvis, and your paraspinal muscles attach to the pelvis. When you roll the pelvis from sitting, it tightens the hamstrings, which tighten the lower back. Then that gives you poor abdominal engagement, which shortens the low back muscles and sets [you] up for lower back pain. All the parts of the body are just one big connected unit."

Sitting weakens your sex muscles. When we're in high school and college and staying active, our bodies are, just from existing, more toned and muscular, even though they might not look that way. But as we get older, that tone is hard to maintain, especially when most of your movement is just to go to work, or go get food from the refrigerator.

"When you put people in a workplace where they're stuck sitting, they basically lose all of those core coordinator muscles around their pelvis and lose that pelvic floor strength," Thomas told Mic. The pelvic floor muscles are tasked with controlling the bladder, the bowels and, in those who have them, the uterus. When your core muscles are hardly used, as is the case with a sedentary lifestyle, those pelvic floor muscles weaken, meaning less control of what's coming out of you.

This is your brain on exercise

Since the first time you had to change into shorts for Phys Ed class, you've been told the benefits of exercise. The Centers for Disease Control and Prevention say you should aim for 150 minutes of moderate-intensity aerobic activity per week, along with some muscle training. Thanks to a chart from Fix.com, you can see all the benefits of getting a little sweaty a few days a week. Anyone who walks 150 minutes weekly is getting a ton of benefits, including a sharper mind, preventing Alzheimer's, storing sensory memories, increased release of mood-enhancing endorphins and overall better brain power.

But the active workforce isn't without its own perils — starting with your back. There's a lot of evidence to suggest a sedentary job is much worse for you than something that involves getting up and walking around. But jobs involving exercise often add other kinds of physical stress to your body.

"Walking is better than a sedentary job, but it depends what you're doing when you're walking, too," Dr. Ronald Taylor, chief of physical medicine and rehabilitation for Beaumont Hospital in Michigan, told Mic. "For instance, a nurse is getting a certain amount of activity. But she's also lifting patients, and there's no good way to do that.

Taylor believes "the most common cause of chronic back pain is stress. So if you're in a job where you're under stress, you'll have more back problems than someone who isn't. As far as your back's concerned, you're digging ditches."

If you don't fight back with proper stretching, you're setting yourself up for disaster.

That means when you're working a stressful job and carry your stress in your back, if you don't fight back with proper stretching, you're setting yourself up for disaster.

Since the back is such a massive part of motion, there are a lot of ways to screw it up. You can strain your lower back from "repetitive impact" like running, twisting it like in golf or hockey or using improper form (lifting from the legs, for example) when picking up or putting down heavy objects — which happens in almost every labor job available.

If you're walking all day without proper support, your feet will tell you. According to Thomas, who sees patients in every field from desk jockeying to athletics, there are plenty of repetitive stress injuries that can pop up across all fields.

"There's a lot that happens to people's feet," he told Mic. He often sees patients with plantar fasciitis, which is an inflammation of the band of tissue on the bottom of your foot that becomes tightened, inflamed or even torn from repetitive walking without proper arch support. Another common ailment is Achilles tendinitis, which is the rip or tear of the tendon stretching from your calf to your heel. And that's just the lower body.

"Those exercise fads of the week don't work," Taylor told Mic. "Get on a cardiovascular program that doesn't cause you pain, and do 30 minutes four to five times a week."

Your shoulders will have something to say about it, too. When Thomas gets package delivery or dock-worker patients from the San Pedro Port of Los Angeles, he knows they'll probably be coming to him with back problems thanks to a lot of bending, twisting and lifting motions.

"We see a lot of rotator cuff injuries from people who do overhead work, too," he said. "We get mechanics with shoulder problems because they're often working overhead while underneath a car. And believe it or not, stewardesses or flight attendants get injured there a lot because of lifting baggage into overhead storage."

Don't worry, though. You aren't doomed if you work in an office.

You don't have to be on your feet all day to avoid turning into a puddle of office-casual mulch — but you do need to be proactive.

"Those exercise fads of the week don't work," Taylor told Mic. "Get on a cardiovascular program that doesn't cause you pain, and do 30 minutes four to five times a week."

Get up and out of your seat. Take a walk. Go pick up lunch instead of ordering in.

Take time to stretch out your calves and the Achilles tendon by standing with the balls of your feet on a stair and slowly lowering your heels.

Stretch out your lower back by doing a yoga pose called the cat-cow stretch, flexing and extending your back.

And stretch your tight hamstrings, the big muscles on the back of your thighs, by touching your toes or lying on your back and lifting one foot at a time into the air.

They're all easy moves to do. They take no time. And they'll help ensure you don't look like a pretzel in your swivel chair.

This article was originally published on Sep. 2, 2015