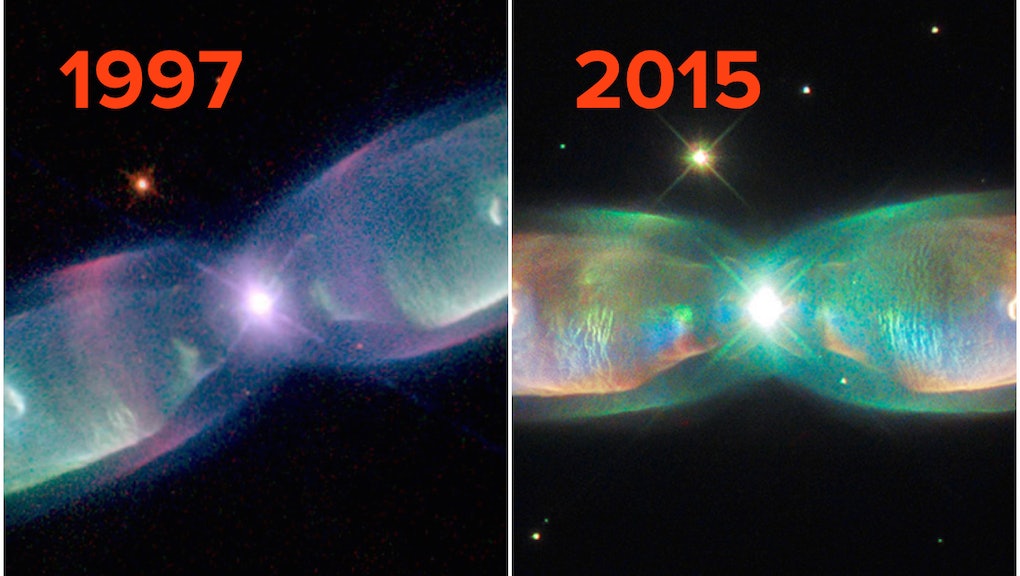 The Hubble Space Telescope has been floating through space since George H.W. Bush was president of the United States. Its first images sent back to Earth in the '90s were cutting-edge and colorful, with the visual punch and novelty of the original Star Wars. But after a shuttle visit in 2009, the installation of the Wide Field Camera 3 and Advanced Camera for Surveys launched space photography into the modern age. It was like swapping out your crappy point-and-shoot for a DSLR.

In late August, Hubble sent back an image of the Twin Jet Nebula, calling it a "cosmic butterfly" (its real name is PN M2-9). It looks like a cell dividing or two fists smashing into lightning in some disbelief-suspending kung-fu movie. What we're really seeing are expanding shells of gas. It's a glimpse of an old star staring its demise in the face.

To give an idea of how much better these new cameras are, here's what the world saw in 1997:

And here's what we see now:

The butterfly is a bipolar nebula, meaning it's a binary star system. To get an idea of what that looks like: It's why Luke Skywalker looked out on a double sunset from his home planet Tatooine.

In May of this year, the telescope also sent back an updated image of the merging galaxies NGC 6240, which we first saw in 2008.

The galaxy you're seeing is 400 million light-years away. It's in the constellation Ophiuchus. The European Space Agency says it bears "more than a passing resemblance to a butterfly." Astronauts, for whatever reason, seem to love butterflies this year.

The reason it doesn't show the spiral effect you might typically picture in a galaxy? NGC 6240 is the result of two galaxies getting too close and bumping into each other, causing new stars to form in bursts, rupturing what might otherwise be a not-quite peaceful galaxy acting like a rolling stone through the universe.

Even cooler still: There are actually two black holes at the center edging toward each other to eventually become one gigantic black hole.

This all just goes to show what we're slowly becoming more capable of. Using better cameras, we're able to see what's happening in galaxies hundreds of millions of light-years away. Scientists can use that information to mold their own theories about how the universe works, so we can better explore the stars and celestial bodies we'll hopefully discover in the future.