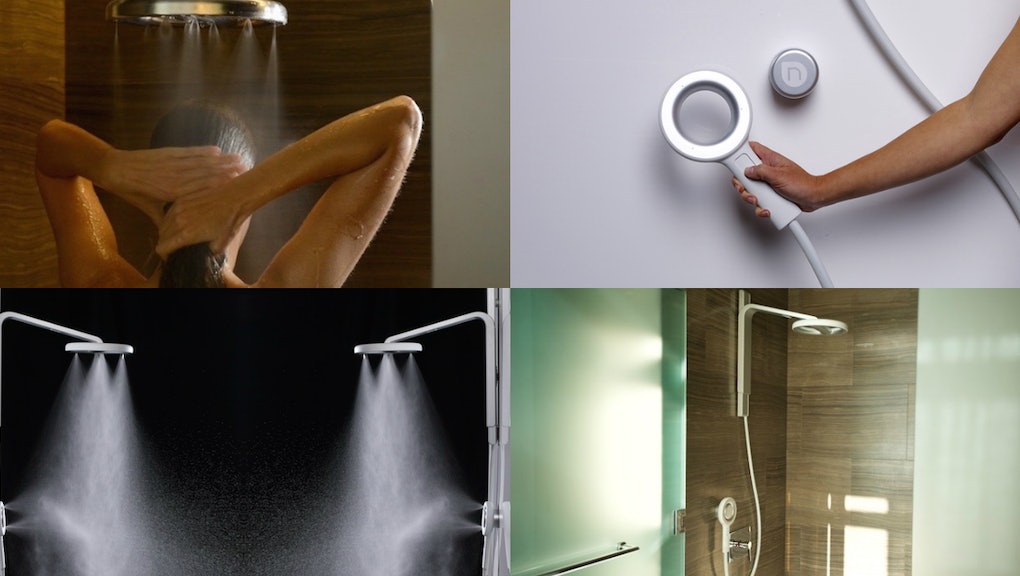 Can This Startup Save the World With a $400 Showerhead?

Every time you treat yourself to a long shower, you're wasting energy and resources that swirl down the drain by the gallon. We all do it. So what if there were one simple change you could make to use less water without thinking about it?

A showerhead called Nebia promises a solution, and Silicon Valley luminaries like Apple CEO Tim Cook are going wild for it, throwing money behind the luxury bathing gadget. Nebia launched a Kickstarter last month and sought $100,000 to start building and shipping its showerheads. So far the project has raised more than $2.7 million. It's sleek and installs easily, and trial users say that using one feels like stepping into a warm cloud.

But most importantly, if a typical shower uses 20 gallons of water, the same amount of time under a Nebia uses only six — that's a 70% reduction in wasted water. In a country where hundreds of billions of gallons of water are wasted every year, it's the kind of savings that we need when, in states like California, years-long droughts have no end in sight.

"Traditional household showers consume markedly more energy than a Nebia just to heat the water, and the majority of that hot water goes straight down the drain," the Kickstarter page brags. "Nebia is 13 times more efficient at delivering the heat you pay for to your body, making your daily shower in a Nebia 13 times more thermally efficient."

Cloud cleaning: Being inside a Nebia shower feels more like a steam room than a shower. The Nebia showerhead uses a design inspired by aerospace engineering to split each water droplet, atomizing the stream and using less water to generate the same amount of surface area.

The effect is like mist, creating a hot cloud that still manages to rinse your body of grime, soap, shampoo, whatever. As soon as you enter the shower, there's no stepping in and out of the stream — you're always in the cloud. From Wired:

Unlike a traditional showerhead, Nebia sort of surrounds you with a thick mist of tiny water droplets. There's no stream of water projecting toward you. The tiny droplets spread out inside the shower space and consume you. It's like a steam room, but one that, well, actually gets you clean. There are two settings: a lighter, mistier option, and a more traditional high-pressure option if you aren't onboard with the airiness of Nebia.

The problem: It likely costs too much for most people to adopt it. Like many Kickstarted gadgets and Silicon Valley luxuries, this fashionable, flexible, fantastic showerhead will set you back. The retail price for a single head is $400; the Nebia was available to early birds for $250, but those offers are now gone.

As of the time of writing, two showerheads are available for $600 — slightly less than the cost of an out-of-contract iPhone 6 — or three heads for $800. (A luxury showerhead from Kohler costs anywhere from $70 to $250, and a more typical consumer shower head costs $20 to $60.)

"Four hundred dollars for a shower head?" one redditor said on /r/Kickstarter. "Most people would not spend that much."

Another chimed in, "I barely even spend that much a year on water for my whole house, let alone just on showers."

The Nebia team claims that with the water you'd save, the showerhead would pay for itself after a year if you live in drought-stricken California. But in most other states, the price of water is half as much as California's — sometimes only a fraction of the cost.

It's hard enough to get people to care about climate change as it is, especially in states where water trouble is less dire. A better, more powerful, environment-saving shower has promise, but it may be a hard sell to get people to invest in a gadget that could take years to pay itself off.