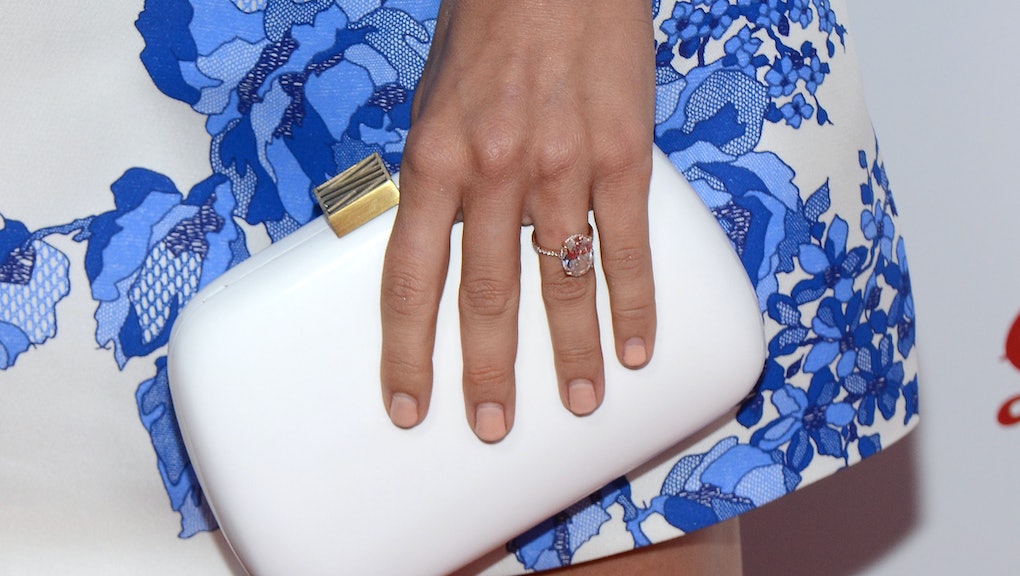 I'm Engaged and It Makes Me Feel Like a Bad Feminist

Feminists aren't supposed to wear their rings and admire the glint off the diamond while they're having sex. They aren't supposed to casually pepper conversations with the word "fiance" followed by a purposeful wink, nor are they supposed to have Pinterest boards for flower arrangements or Google search histories with the entry, "Would George Clinton and Parliament Funkadelic play a Jewish wedding for like 200 bucks and a six-pack of Pabst Blue Ribbon?" (The answer: No.)

Feminists aren't supposed to view marriage as an accomplishment in itself, the bar of chocolate at the end of the lab rat maze that is being a twenty-something woman. Ideally, they shouldn't get married at all.

And for most of my life, I pretty much agreed with all of that.

I never really put a premium on getting married. Aside from the obvious appeal of having a big, sloppy party with my friends, there didn't seem to be any tangible benefits to getting married that cohabitation didn't also offer. Since I already was living with my partner, marriage didn't seem like it would make that big a difference. I wasn't opposed to it — I just wasn't in a rush to jump on the marriage-and-babies train.

I'm not the only woman of my generation who feels that way. The marriage rate has been steadily plummeting for the past few years: Only 26% of millennials are married, as opposed to 36% of Gen Xers and 48% of baby boomers when they were the same age. This disparity can largely be attributed to the rising rates of cohabitation, as well as the general sense among millennials that getting hitched and having kids just isn't a priority so early on in their lives.

"There's an attitude of, 'We are together because we want to be, not because we have to be,'" one unmarried millennial previously told Mic about her relationship with her partner. "I don't feel like either of us are looking for security in a legal marriage. I think that my partner and I are just happy being together, and we're secure in that decision."

I felt the same way — until I didn't. The second after Alex proposed (it was on a paddleboat, and yes, if you must know, I cried), I metamorphosed from a dyed-in-the-wool, liberal arts-educated, ardently pro-choice, Roxane Gay-quoting feminist into a less progressive version of June Cleaver.

I took a photo of the ring and put it on Facebook, like every other basic bitch I went to high school with (except with stubbier and more sausage-like fingers). I sat with Alex and obsessively refreshed Facebook so we could see the likes and accolades roll in. I started referring to my marital status in emails to work acquaintances, usually to get out of social obligations. (For what it's worth, people are less likely to get pissed at you for flaking if you say you're engaged than if you say you're sick.)

But every time I giggled or cried or flashed my ring in a convenience store employee's face for literally no goddamn reason, I promptly apologized for it. I felt the need to explain to total strangers that this Stepford wife was not me, that I didn't think having a ring on my finger was a validation of my existence, that I'd donated to Planned Parenthood and read Judith Butler and planned to vote for Hillary.

"Thank you," I primly told a cafeteria worker after she congratulated me on getting engaged. "It goes against my staunch feminist principles, but I'm pleased about it."

Alex thought this was ridiculous. "You're allowed to be happy about it," he said. "Being happy about being engaged doesn't make you a bad feminist." But it still felt wrong. To celebrate entering an institution that you're opposed to on a basic ideological level feels like an act of hypocrisy of the highest degree, like loving animals and eating meat, or being a GOP politician and visiting a glory hole right after you cast your vote against gay marriage.

I am a feminist who is casting my vote for an institution that oppresses women. And I don't really know what to make of that.

Marriage can be a feminist choice. Intellectually, I know that being in love with a man and believing in gender equality are not mutually exclusive, and that feminists get married all the time. But they have cool, hip, sexy weddings, like the one in Rachel Getting Married, with a nondenominational ceremony and barefoot biracial children and a lesbian officiant who quotes Beyoncé during the vows. They don't obsessively refresh their Facebook posts so they can see if their high school nemesis liked it, and they certainly don't register for gifts at Sur La Table. (We haven't yet, but my mom wants us to.)

I also realize that the definitions of both feminism and marriage are fluid, and that Alex and I have the freedom to discard outdated, gendered traditions and come up with new ones. For instance, I don't plan on wearing a white dress — I'm a sex writer, so the jig is pretty much up regarding my virginity status — and I'm 85% sure I won't take his last name, at least not professionally.

The truth is, he can never really know the answer to that, and neither can I. But I do know one thing: I think he is the greatest man on the planet and I want to be with him and only him. That part about marriage — the most basic, traditional, expected reason why people would want to get married, regardless of ideology or even insecurity — 100% applies to us.

Whether you're a feminist or not, we're all trying to live according to a set of ideals. Often — probably more often than not — we will fall short of them. I am not always the best version of myself, which applies just as much to being a good partner just as much as it does to being a feminist.

But our lives are simply shaped by our ideals; they aren't dictated by them. My feminism is a sketch of the kind of person I will be, not a blueprint in itself. It will guide me throughout my life, but it will not define my choices or who I fall in love with or how I choose to express that love.

And there's nothing that could possibly be more feminist than that.