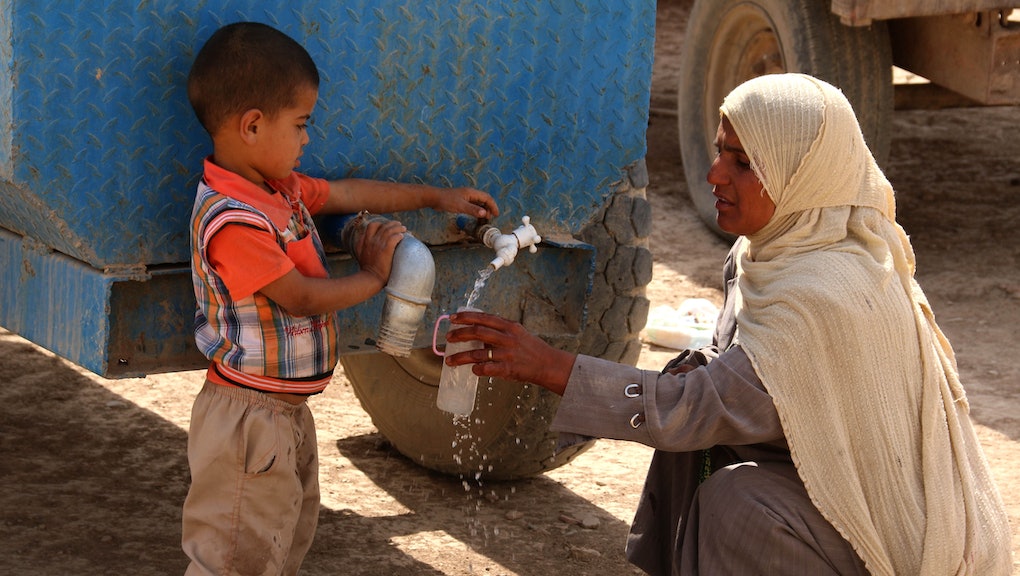 Minhaj Chowdhury Started Drinkwell, a Water-Filtration Company That Could Save the World

According to UNICEF, 663 million people lack access to drinkable water, and nearly 2.5 billion people don't have decent sanitation. Water scarcity is one of the biggest problems facing vast swaths of the globe, and at the current rates, two-thirds of the world could be facing water scarcity problems by 2025. But one 26-year-old is trying to change all that.

In 2013, Minhaj Chowdhury started Drinkwell, an organization that provides filtration systems to poor communities with dangerously high levels of arsenic and fluoride in their water, which can lead to death.

"When I was growing up in Dallas, there would be summers where we went back to the homeland [Bangladesh] and, often when we went back, we'd find the issue of arsenic [in water] was taking the lives of close family and close family friends," Chowdhury told Mic. "So, it's always been on the radar."

According to Drinkwell, it is the only company in the world to use a "resin-based regenerable adsorbent" to filter the water, one of the most efficient methods available. Drinkwell cofounder Arup K. SenGupta, who is also director of research and development, developed the technology.

The man behind the magic: After a brief stint of consulting after graduation, Chowdhury found himself gravitating back toward the same public health issues he studied at Johns Hopkins University. But while thinking about these issues, he grappled with the right approach to the problem — whether he wanted to launch a for- or nonprofit enterprise.

"Water is absolutely a human right. When you actually provide water to people in need I don't think that should be a for-profit activity; it should be provided by the government. But, at the same time, the institutions are so broken. NGOs aren't working [sustainably] either," Chowdhury said.

After looking at various business models and existing water programs, Chowdhury discovered the most sustainable programs were those that engaged locals in a for-profit system. "According to the UN, 50% of all water projects fail because communities have not or cannot assume responsibility for maintenance and repairs of water systems," Drinkwell's website writes.

To address this, Drinkwell employs a micro-franchise model, wherein locals turn their filtration systems into small, self-sustaining businesses. Chowdury believes economic empowerment is the only way to incentivize people to keep the filtration systems going over the long term.

"Historically, we've relied on external funding to grow," Trisha Chakraborty, Drinkwell's lead consultant for strategic initiatives, told Mic. "But we've come to a place where we're relying on micro-loans to enable entrepreneurs to sell clean water themselves, and, in doing so, can grow well beyond anything external funding can provide. You're no longer reliant on philanthropy; this is a self-sustaining business model."

Drinkwell is addressing a decadeslong issue. "Here's what's funny: The arsenic crisis itself is the product of a development disaster," Chowdhury said.

Between the 1970s and 2000, development organizations such as the International Monetary Fund and World Bank created programs whereby millions of tube wells were drilled throughout the country as a solution to widespread fecal-contaminated water. But the tube wells were distributing water unknowingly contaminated with arsenic, leading to a variety of problems.

Drinkwell filtration systems extract the arsenic and do it efficiently. "Whereas current solutions use Reverse Osmosis technology that wastes 40%-60% of input water, Drinkwell wastes only 1% of water," their website explains. The polymers, or resin beads, are infused with nanoparticles which extract arsenic from water flowing through them. These polymers are regenerable and can filter water for years.

A creative way of doing things: Chowdhury said trying to enter different markets in different countries presented unique challenges — the rules of the game changed depending on where Drinkwell was operating. One of the most important lessons they learned — that traditional NGOs hadn't been promoting clean water in the most efficient way — was a complete accident.

"One father took water home and gave it to his eldest daughter. While he was out, she saw a big pot of water sitting there and thought she should shower with it because she had to go to a wedding later," Chowdhury said. "Everyone at the wedding was wondering how her hair was so soft and she said, 'I used Drinkwell water.'" Profits suddenly spiked by 200%."

Chowdhury believes people, especially those living in poverty, often don't operate with the intention of maximizing their benefits a long way into the future. "People don't care about long-term health benefits. It's about how one feels better now or looks better now. So the way NGOs have been marketing it [clean water] was not good," he said.

"Traditionally [NGOs] would say clean water will prevent diarrhea, cholera, arsenicosis. People with limited means would say, 'I understand that, but I have a lot of other competing interests. So, I'll chose what will help me right now.'"