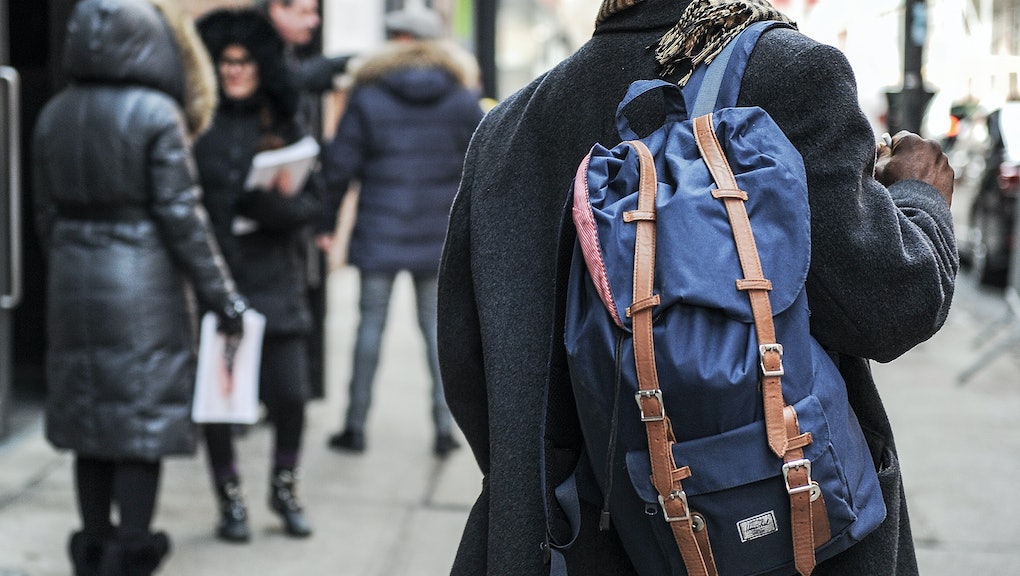 That's how much Herschel Supply Co., the Canadian startup behind everyone's favorite backpacks, saw sales soar in their first year. The success of Herschel is jaw-dropping, but it shouldn't be. With their "utilitarian nostalgic, but really modernized" bags, the savvy brothers behind Herschel gave us something we didn't know we needed.

Now we're living in the era of the backpack, the ultimate accessory for the under-40 adventurer, who's usually adventuring no further than the office, gym or bar. What started as a hipster trend led by small labels like Fjallraven has gone mainstream, and it makes perfect sense why: Backpacks are ideal for our backs, bank balances and our tech-heavy lives.

They're also much more fun than purses.

Just trendy enough: "The millennial shopper has a different set of values when it comes to their bags. They want something that is made well and easy to wear that isn't necessarily season-led, all while having an accessible price," Laura Miller, accessories editor at trend forecaster Fashion Snoops, told Mic.

It's not that we don't care about labels at all (after all, Herschel backpacks have their own recognizable badge). But all signs point to the fact that we're not slaves to luxury logos like past generations. Sales for designer handbags are dipping and brands are "struggling to strike a chord with younger and repeat customers," according to Forbes.

Instead, young people apparently want lifestyle brands that "express their personal passions," as Pam Danziger of Unity Marketing told Luxury Daily. And we want something that's functional and long-lasting, not to mention unisex.

Backpacks fit that bill, and more. Because let's be honest: While our fondness for backpacks has to do with their timelessness and ease, they're also part of the "athleisure" trend. Exercise-friendly clothes, including sneakers and those ubiquitous Lululemon items, are about the most stylish thing you can wear these days.

Which is why it's no shock that models are sporting backpacks and designers like Alexander Wang and Celine have brought new life to the practical item. "The backpack is chic again! Who knew?" mused Vogue this year.

No pain, all gain: Caring about ergonomics might seem like something for a different generation, but backpacks are much kinder to our necks, backs and shoulders, Tim Everett of the Bad Back Company told Mic.

"Carrying a heavy bag on one side creates enormous strains to the muscles, tendons and joints as they attempt to quite simply keep the body upright and compensate for the heavy load," he said.

Over 80% of women who carry handbags complain of pain in their shoulders, while 57% suffer from neck strain, according to a survey by Prevention. (Although Everett warned that heavy backpacks could still cause injuries when not worn properly, and that you should always use both straps.)

Backpacks also reduce the pain to our wallets, with Herschel's popular Little America model retailing for $130 and Fjallraven's Kanken, originally designed to save the backs of Swedish schoolchildren, selling for as little as $75.

When you consider that the ultimate It Bag, Hermes' iconic Birkin, retails for over $14,000, and that the more reasonable purses, like Rebecca Minkoff's shiny accessories, usually ring in over $200, spending anything less on a fashionable bag that won't fall apart seems like a pretty good deal.

The hands-free generation: But really, what might make the humble backpack especially perfect now is that, despite its roots in campuses and hiking trails, it's actually perfectly tailored to modern tech needs.

Just take a look at Seoul, the world's most connected city, where backpacks are everywhere as the symbol of the "hands-free generation" who store everything in their phones, according to GQ U.K. editor-in-chief Dylan Jones. British department store Debenhams attributed a spike in backpack sales in 2014 to shoppers' need to keep their hands free for texting, Tweeting and Google-mapping.

That may sound sad — we're embracing backpacks because we literally can't let anything else between us and our most important accessory, our phones. But it's a practical choice that makes sense on too many levels not to embrace it. After all, how will we leave our hands free for those healthy smoothies after our "workout classes" (read: brunches)?

Plus, backpacks make you feel like a kid again, without straining that newly sensitive grown-up back. There's really nothing more you can ask for — meaning those Herschel bags are probably going to be here for a while.