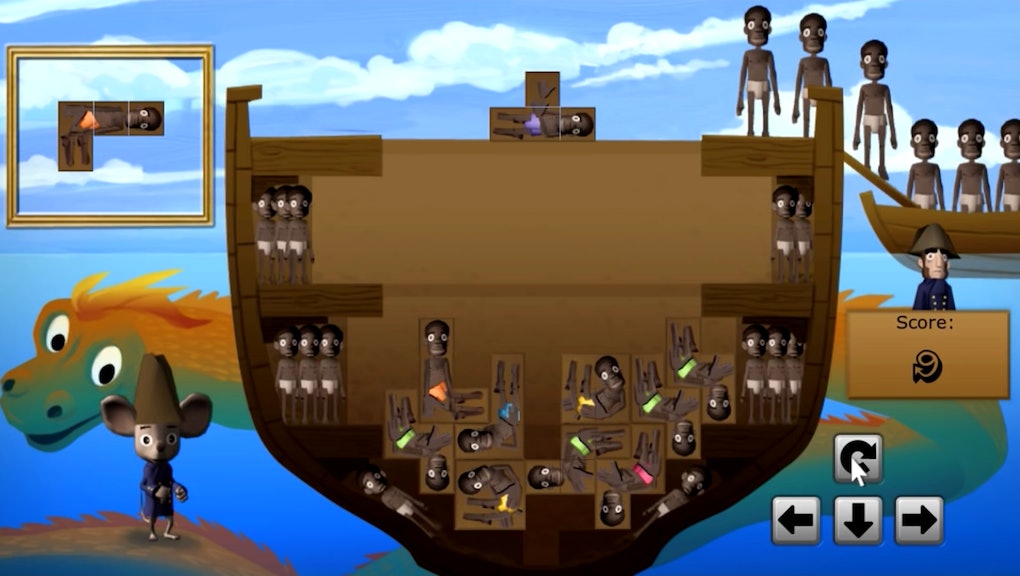 An educational game designed to teach schoolchildren about slavery is drawing criticism for a gameplay segment critics are calling "slave Tetris" — and its creator has responded by blaming the United States for being too sensitive.

In Playing History 2 - Slave Trade by Danish developer Serious Games, players are asked to stack slaves in a ship in a Tetris-like mini-game in an apparent attempt to teach young people about the real-life horrors of slave shipping.

The game also features a part in which players are asked to help inspect slave stock in Africa (purchased from a village chief who quotes Mister T).

Though the game is a few years old, it's recently gained increased attention, which has led to an array of condemnation from some who feel that turning the slave trade into a fun, brightly colored game for children is inappropriate.

But Serious Games CEO Simon Egenfeldt-Nielsen has essentially told critics to stop being so sensitive and blamed the game's poor reception stateside on cultural differences between Denmark and the United States.

"Maybe we are not the only ones not getting it," Egenfeldt-Nielsen told ThinkProgress via email. "Maybe there is just a lot of culturally differences in what you can discuss and express — and maybe just maybe there are larger issues at stake here then whether slave tetris was bad taste or not."

But for most people, the issue is the way the game chooses to present the slave trade.

The creators "would be drawn and quartered if they made a game about how to fit Jewish people into an oven, but they don't see what the fuss is about making a game about enslaved Black people on a ship?" one Instagram user wrote. "GTFOH."

"This is a thing that should not exist," one YouTube play-through of the game begins. "It's called Playing History: Slave Trade. That's not a joke [...] this is real."

"Maybe as a lot of the tweeters say a stupid white Dane like me don't know anything, and shouldn't be allowed to say a single word about the story of African-Americans," Egenfeldt-Nielsen wrote to ThinkProgress. "I have reached the conclusion that no matter what we had done it would have been wrong."

On Twitter, he also argued the game put children in the role of virtual oppressor, saying the "point is to disgust people" over their own actions.

On Monday, Serious Games updated the game remove the slave-stacking segment, with a note stating the Tetris-like section was "removed as it was perceived to be extremely insensitive by some people. This overshadowed the educational goal of the game."

"Apologies to people who was offended by us using game mechanics to underline the point of how inhumane slavery was," the statement continued. "The goal was to enlighten and educate people — not to get sidetracked discussing a small 15 secs part of the game."