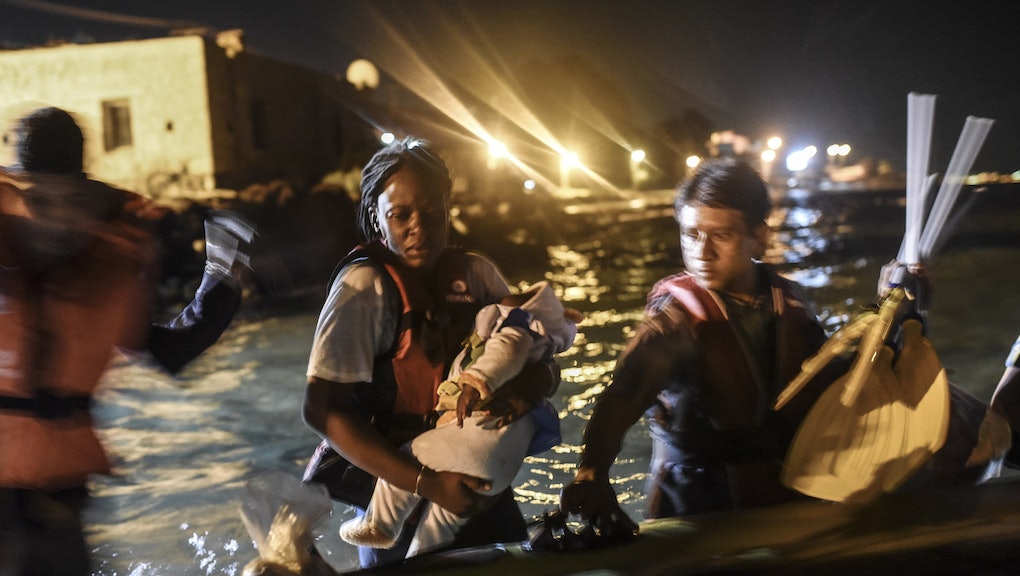 The Tragic Reality of the Syrian Refugee Crisis, in One Gut-Wrenching Photo

In August, a record-breaking 107,500 people illegally attempted to cross European Union borders, according to Frontex, the EU agency that manages national and international borders and border security. The majority of these migrants were reportedly Syrians and Afghans coming mainly into Greece and Turkey. Many of the refugees, however, do not make it past these borders, dying during failed attempts.

An image released Wednesday morning of the body of a small Syrian boy, who drowned in a capsized boat fleeing his home country and washed up on the Turkish shore, captures the anguish of the region's refugee crisis.

The media has covered the political ramifications and governmental responses to the crisis, but the stories of human loss have been largely overlooked.  The following images capture the human toll of what has become an increasingly complex and horrific international struggle.

Warning: Some readers may find this image disturbing.

The subjects: Pictured above is a Turkish paramilitary officer holding the body of a young boy, who was part of a larger group of Syrians attempting to flee to the Greek island of Kos. They left in boats, which ultimately capsized, leaving almost a dozen drowned.

The boy's group was trying to cross the five-kilometer body of water which separated them from Kos, leaving a woman and three children among the dead. Only two people survived.

One symptom of a huge problem. For decades, human rights organizations like the United Nations High Commissioner for Refugees have attempted to send aid to countries such as Syria, Liberia, Somalia and Afghanistan, but often to little or no avail.

"The human rights agenda is losing ground to the national sovereignty agenda, and that is making humanitarian work more and more difficult in several parts of the world," António Guterres, the UN High Commissioner for Refugees, said in a statement.

More than 300,000 refugees and migrants have traversed the Mediterranean in 2015. According to reports from the UNHCR, almost 200,000 landed in Greece, while another 110,000 tried to seek refuge in Italy. The number is up by almost 50% from all of last year, which totaled 219,000 migrants and refugees.

In Syria alone, 7.6 million people have had to flee their homes since the civil war there began five years ago, leaving approximately half the country's population either internally displaced or as refugees.

On Sunday, the EU announced it will be holding emergency talks regarding the growing refugee crisis on Sept. 14. "The situation of migration phenomena outside and inside the European Union has recently taken unprecedented proportions," the Luxembourg Justice and Home Affairs Department said in a statement regarding the talks. "In order to assess the situation on the ground, the political actions underway and to discuss the next steps in order to strengthen the European response, [we have] decided to convene an extraordinary JHA Council."

On Monday, German Chancellor Angela Merkel addressed the urgency of the problem. "If Europe fails on the question of refugees, this close connection with universal civil rights ... will be destroyed, and it won't be the Europe we want," Merkel warned, Al Jazeera reports.