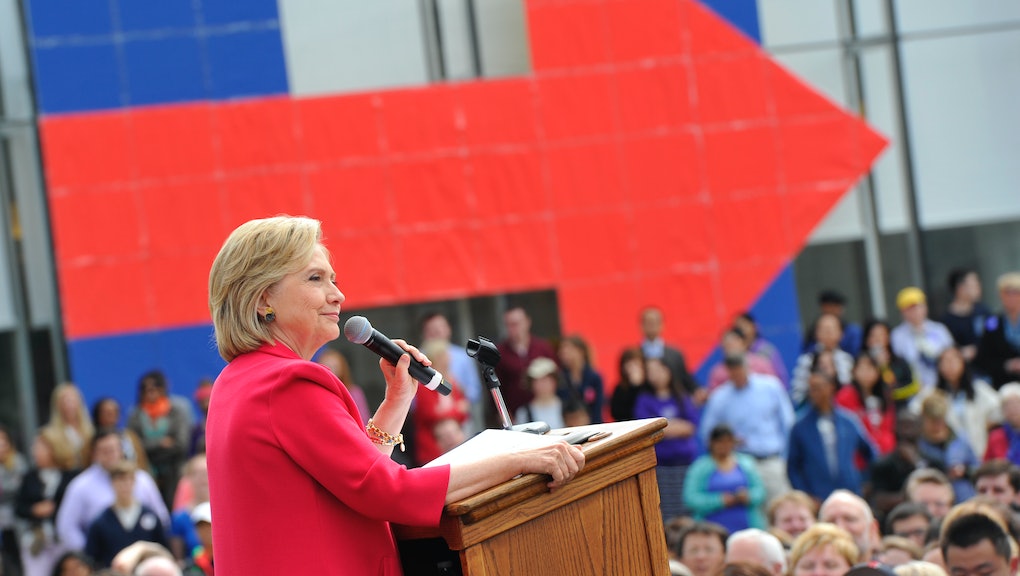 In the last decade, heroin use has more than doubled among young adults, and overdose deaths from the drug increased nearly fourfold between 2002 and 2013, according to the Centers for Disease Control and Prevention. The number of deaths tied to drug overdose in the U.S. now exceeds road accident fatalities in most states.

"It's time we recognize as a nation that for too long, we have had a quiet epidemic on our hands," Clinton wrote in an op-ed previewing her policy rollout in the New Hampshire Union Leader. "Plain and simple, drug and alcohol addiction is a disease, not a moral failing — and we must treat it as such."

The program: Clinton's plan starts from the premise of drug addiction as a public health crisis, rather than one born of cultural decline or drug lords run amok. For this reason, it cautions against waging the war on drugs as it's been fought before.

"We cannot arrest and incarcerate our way out of it. We need a new approach to tackling this complex challenge," reads the proposal. "The costs to our nation of not doing so are huge: reduced productivity, overloaded health care and criminal justice systems and hundreds of thousands of human lives lost."

The drug plan dovetails naturally with Clinton's policy emphasis on criminal justice reform and much lighter sentences for drug possession. The campaign argues that drug addiction cannot be solved by incarceration, calling for "treatment over prison for low-level and nonviolent drug offenses."

Prisons would in fact be expected to do more to address their neglected drug addicts: "We should foster more collaboration between our public health and criminal justice systems before, during and after a person is released from prison, to ensure continuity of care for those who suffer from substance use disorders and are arrested and incarcerated."

Clinton's plan for ramping up treatment is multi-pronged. It pledges $7.5 billion for federal-state partnerships, offering states $4 of federal support for every $1 dollar they commit to formulate plans for addressing drug abuse problems in their state that don't rely on prison cells. The proposal recommends that states invest in prevention education, public health operations for treating addiction, rescue drugs designed to counteract fatal opioid overdoses and programs to reduce the overprescription of addictive drugs (which can serve as a gateway drug to heroin).

Clinton's campaign also promises to take federal actions to enhance treatment access, most notably injecting $2.5 billion over 10 years into the Substance Abuse Prevention and Treatment Block Grant. Strikingly, Clinton calls for a change to federal regulations that bar some health professionals from prescribing medications for opioid drug addiction, a change that the medical establishment increasingly views as an effective technique for ensuring sobriety.

What it means: Clinton's drug plan is clever, in terms of both policy and politics. On the policy end, its diagnosis of drug addiction as a health challenge rather than a moral defect has the backing of large swaths of the medical community. Its prescription for solving that problem — through treatment for use rather than by endless war against demand — is one that's long overdue.

In terms of politics, it's a sensible way to engage the public. Curtailing the role that the criminal justice system plays in shaping American society has emerged as a major political theme this year, and it's attracting the attention of politicians on both sides of the aisle. On Wednesday, Republican presidential candidate Gov. Chris Christie released a video in which he calls for reappraisal of the war on drugs, tying his pro-life stance to compassion for people suffering from drug addiction, and proposing treatment as a better solution.

The prospect of a major paradigm shift on the way the public relates to drugs seems to be growing stronger every day.