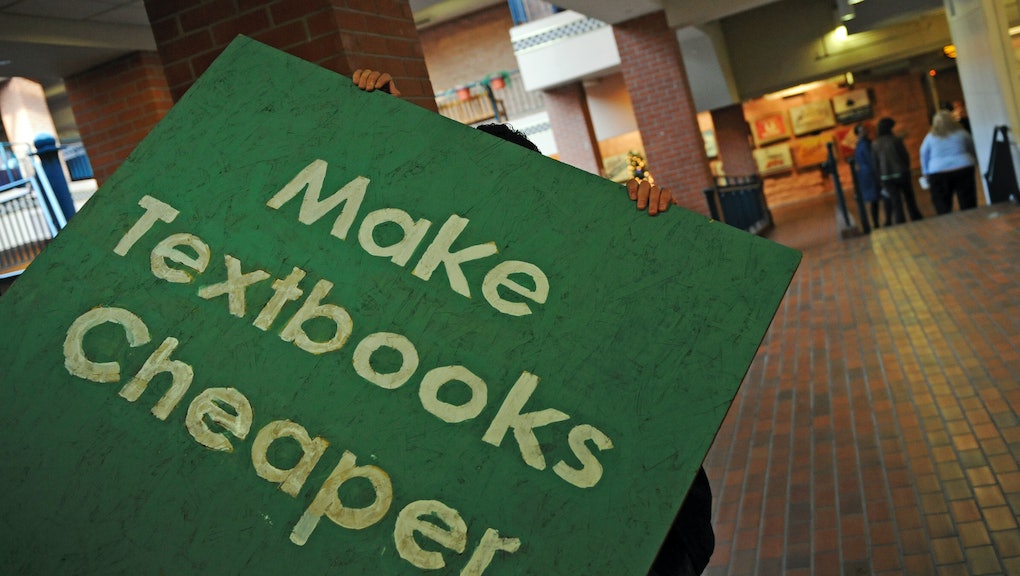 Three hundred dollars. Four hundred. Seven hundred. Nine hundred. Five hundred fifty-six dollars and thirty-seven cents: These are the real financial realities of buying textbooks as a college student in 2015. On top of skyrocketing tuition costs, substantial living expenditures and the terrifying, ever-present specter of college debt, students at universities across the country must also grapple with the shockingly high cost of textbooks.

As one Tumblr user told Mic of the totals, "I haven't even checked yet because I am too scared."

While college bookstores often attempt to entice customers with promises of big savings, more often than not, those students still end up forking over fistfuls of cash.

Online options like Amazon and Chegg offer better deals. (The former allows shoppers to buy used or new books, and the latter allows shoppers to rent books or sell them back at the end of the semester.) But like college bookstores, these options, while certainly cheaper, still cost money.

Enter free online textbook websites. There are a number of websites that stockpile downloadable versions of textbooks and regular books.

Bookfi.org, for example, hosts easy-to-use search engines that can pull up book titles and their corresponding download links in seconds; ebookee.org catalogs titles into sortable genres and categories; Project Gutenberg, a donation-based site similar to Wikipedia, claims more than 49,000 titles to its name; and this nifty tool, courtesy of Reddit user ManWithoutModem, sources from a number of free sites using a custom Google search engine.

Torrenting and trackers are also useful resources. But unlike Project Gutenberg, whose material is largely untouched by U.S. copyright law because of expired copyrights, these options exist in a legal grey area, as the material they host may be protected under copyright. Still, they're easily accessible, if a tad shady. (The possibility of malware or spyware always looms, as with anything downloaded from an unknown source.)

"I use some of these trackers and websites to find PDFs of books," Cody, a 22-year-old mechanical engineering student at Georgia Institute of Technology, told Mic. "Textbooks are priced way too high for me to justify legitimately purchasing most of my textbooks."

"Textbooks are priced way too high for me to justify legitimately purchasing most of my textbooks."

He added that his textbooks typically cost anywhere from $200 to $800 a semester, but he usually gets around the full amount by downloading PDFs or borrowing books from friends and fraternity brothers. When you add it all up, he said, his textbook budget ranges from $300 per semester to nothing. (An NBC News analysis of data from the Bureau of Labor Statistics found textbook costs have increased 1,041% since 1977; the average public school student spends roughly $1,200 per year on textbooks, according to the College Board.)

But there are cons to using these websites. Besides the danger of downloading material from mystery sources, there are other issues with e-book websites. The most pertinent: their inventory, or lack thereof.

When you walk into a college textbook store, you can be pretty sure that they'll have the books you need. But free websites carry no such guarantee; no matter how hard you look, and no matter how many torrenting sites you traipse through, some of your books just might not be there. This is especially true when it comes to professors — or "Gilderoy Lockharts," as Slate's Rebecca Schuman so aptly described them — who force students to buy the textbooks they wrote.

Vince, a 20-year-old media studies student at New York University, told Mic that some, but not all, of his books could be downloaded online. Likewise, Kara, a graduate student at Tulane University, could only find two of her four textbooks using the websites Mic rounded up.

"I get really distracted when I'm reading an e-book on the computer, because I'm like, 'Oh, look! BuzzFeed quiz!'"

There are other considerations too: Both Vince and Kara emphasized that they enjoyed the ability to mark up and highlight physical textbooks. More importantly, they can also serve as a gateway drug to the rest of the Internet.

"I get really distracted when I'm reading an e-book on the computer, because I'm like, 'Oh look! BuzzFeed quiz!' Which isn't ideal, since I'm spending all this other money on education," Kara told Mic. Vince agreed, adding, "I can only stare at my laptop for so many hours a day. It's just good to differentiate the experience of going online and surfing the Internet versus reading academic things. Switching up the media helps me to differentiate it."

Worth the risk? Still, if the savings amount to hundreds of dollars, the benefits can't be ignored. "It seems a little sketch, but I'm willing to take some risks considering how expensive these books are," Vince told Mic. In fact, while checking out some of the sites in this story, Vince discovered one of his textbooks was listed. ("I'm pretty sure you just saved me $120," he told Mic. "There's a downloadable version of my comparative politics textbook!")

Given the costs of higher education, any opportunity that arises for college students to save money — even if it doesn't get the total down to zero — is a welcome change, and it's certainly better than not buying books at all.

After all, that extra cash can buy a hell of a lot of beer.