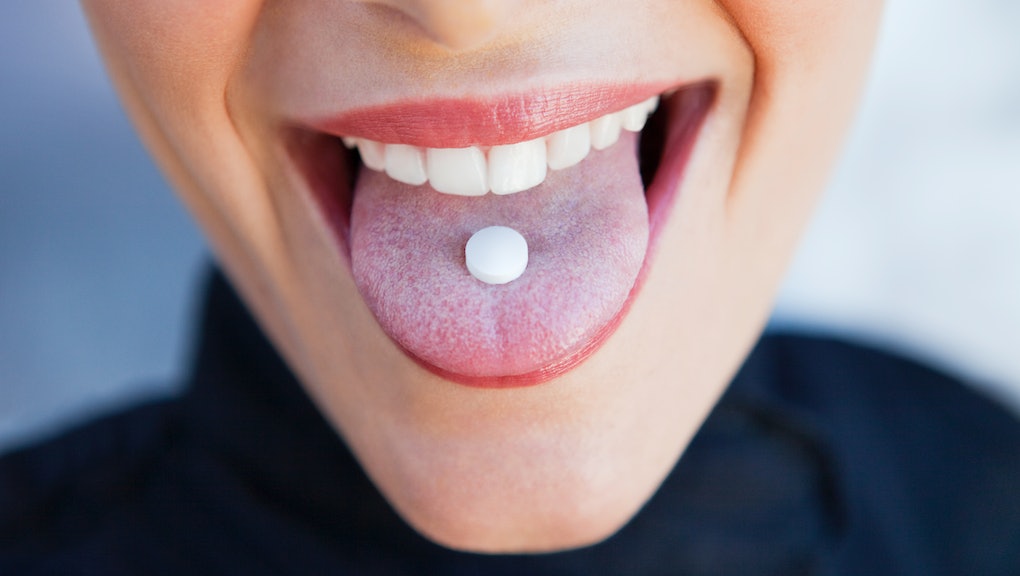 Tim* doesn't remember the first time he took modafinil, which he says is only because he naturally has a bad memory.

He guessed it was a "few years ago," when he was living in Singapore working as a director of a major investment bank. "One time I bought it myself, another time I got it for free from a friend," he told Mic. "I found a website that was selling it."

What Tim has no trouble remembering, however, is what happens when he takes it. "You just generally feel a bit smarter, you feel you can kind of compute stuff fast in your head ... modafinil makes it really, really easy to actually focus and get in the zone, everything else kind of fades away when you're trying to concentrate on something," he told Mic. "It's very, very subtle; it's not like taking caffeine or speed or cocaine."

Modafinil, often known by its industry name Provigil, is a relatively common wakefulness drug first developed by the French chemist Michel Jouvet in the 1970s as a way to treat chronic sleep deprivation. Fast forward to today: Modafinil has become the drug of choice for treating narcolepsy and is also often prescribed for ADHD and shift work sleep disorder.

Additionally, like its more well-known cousins, Adderall and Ritalin, off-label modafinil is often used as a "smart drug" or "nootropic" by the otherwise healthy general public.

Modafinil also lacks the plethora of nasty side effects the other drugs pose and presents an overall smoother experience.

Increasingly, science agrees. While Tim's story is only anecdotal, a growing body of scientific evidence supports the proposition that modafinil can be taken safely by the general population with nothing to treat, at least in the short term. If true, the scientific community's consensus would be a first for a smart drug.

In a groundbreaking new study published in the scientific journal European Neuropsychopharmacology,   researchers from Harvard and Oxford universities found short term use of modafinil improved users' cognitive performance significantly over a control group in a variety of metrics. In the paper's summary, authors Ruairidh Battleday and Anna-Katharine Brem wrote:

Just ask Limitless' Bradley Cooper, who took a similar drug in the 2011 film:

The study's authors also concluded modafinil had some surprisingly beneficial effects on personality, too: "It appears that modafinil exerts minimal effects on mood – if anything improving it – and only rarely causes minor adverse effects." Those adverse effects were markedly limited. "Negative cognitive consequences of modafinil intake were reported in a small minority of tasks, and never consistently on any one."

"Oh, it's very safe," Dr. Meeta Goswami, director of the Narcolepsy Institute at New York's Montefiore Medical Center, told Mic. "I have patients all the time that are using this." While Goswami said she could only specifically speak to its effects on those with narcolepsy, she offered guarded acceptance of its use as a smart drug. "If you ask me, people are always better off not taking all these medications," she said. "But it could be used over a wider population because it's safe enough."

Good news, however, does not foreclose all risk. Like almost any drug, there are side effects. While these are mostly confined to nausea and headaches and tend to eventually subside, there are also more serious ones. In rare cases, the drug has been associated with potentially fatal skin conditions like Stevens-Johnson syndrome and toxic epidermal necrolysis.

Andrew Hill, the lead neuroscientist at TruBrain, a company that produces nootropic products, said he nearly died while taking modafinil for ADHD, which he said caused a severe attack of erythema multiforme minor, another related side effect. "[I] spent four to five days in the emergency room," he told Mic. "My lungs started closing up."

His reaction, however, was not typical. Aside from being a rare side effect, when E Minor does occur, it is typically — as its name suggests — minor. The National Institutes of Health classifies most cases as "not very serious," with the primary culprit being sexually transmitted diseases like herpes simplex and mycoplasma.

"Rare side effects happen with many, many medications," Goswami said when asked about the potential skin conditions. "Even something as simple as aspirin could give you something."

While modafinil may exhibit occasional adverse side effects, research so far has been exceedingly promising and positive. With the first safe "study drug" now potentially on the horizon, the future appears limitless.

*Name has been changed to allow subject to speak freely on private matters.