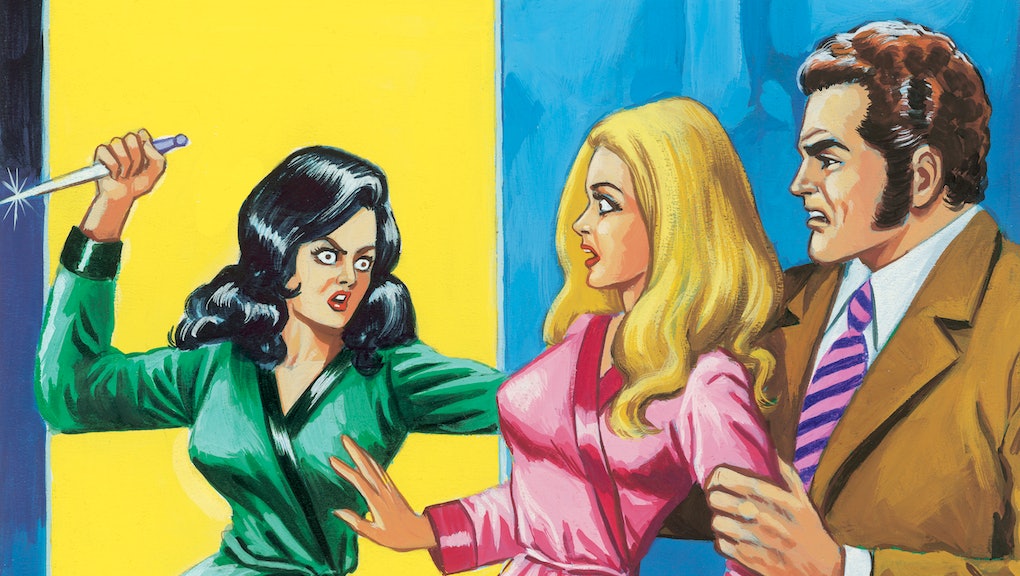 Ladies, Don't Be Friends With Ovulating Women, 'Cause They're Gonna Steal Ya Man

Ladies, amirite? They're catty. They're never, ever friendly to each other. They have no positive examples of what it looks like to actually be nice to another female human. And they're constantly in competition. I mean, have you seen Mean Girls? It's like that.

Finally, research has figured out the real reason why women are so competitive with each other: It's just hormones!

According to findings released in the journal Biology Letters, girl-girl rivalries could actually be the result of evolutionary competition, and not, say, the inevitable outcome of a society that pits women against each other.

In a study of 220 women at various stages of their menstrual cycles, researchers from the University of Bern found that when women with high estrogen levels saw photographs of women who were ovulating, they were more likely to believe the ovulators would steal their romantic partners. It seems at the point when ladies are most likely to get pregnant, they get most combative with their fellow fertile females.

The findings correspond with earlier research about the ways ovulation can affect interpersonal relationships: Last year, a series of studies concluded that at peak fertility, women are less likely to share with other women, and are also more likely to be mean to them. Other research has also shown that men find women more attractive when they're ovulating.

That's not actually the finding the new study intended to augment; the Bern researchers initially set out to determine if women also found other ovulating women more physically appealing. Instead, they stumbled into the finding that women might actually find each other more threatening when their hormones are surging, which lends itself to the conclusion that female feuds are merely a byproduct of our evolutionary end goal: getting pregnant.

Naturally, drawing conclusions about women's "natural" inclinations to tear each other down are more than a little problematic. First and foremost, the study leans hard into considering females' interpersonal relationships from a heterosexual perspective, thereby excluding the dynamics between LGBTQ women. It also plays into damaging tropes about the overwhelming way hormones influence women's behavior — you know, the sorts of tropes that still make people concerned about what will happen to the U.S. nuclear arsenal if a woman is elected president and, heaven forbid, gets her period in the Oval Office.

Hormones can't explain everything. And while the study doesn't purport to pin all female competition on high estrogen levels, it does reinforce the notion that potentially damaging tension between women is simply inevitable; it's literally in our blood.

Pointing to biology, however, overlooks the ways society shapes women's behavior (and, for what it's worth, men's too). As Emily V. Gordon wrote for the New York Times in 2015, women's aggression toward each other can also result from "internalizing the patriarchy," or, "In short: When our value is tied to the people who can impregnate us, we turn on each other."

But if there's anything to be gleaned from the rise of celebrity BFFs like Amy Schumer and Jennifer Lawrence or Beyoncé and Nicki Minaj, or Taylor Swift's promotion of #SquadGoals (troubling as they might be), it's that women don't always turn on each other — which means they don't necessarily give in to the evolutionary or hormonal instincts supposedly underpinning human behavior.

Yes, women can be mean, and yes, sometimes it really might be because they're PMS-ing. But, like female relationships themselves, they're a whole lot more complicated than that.