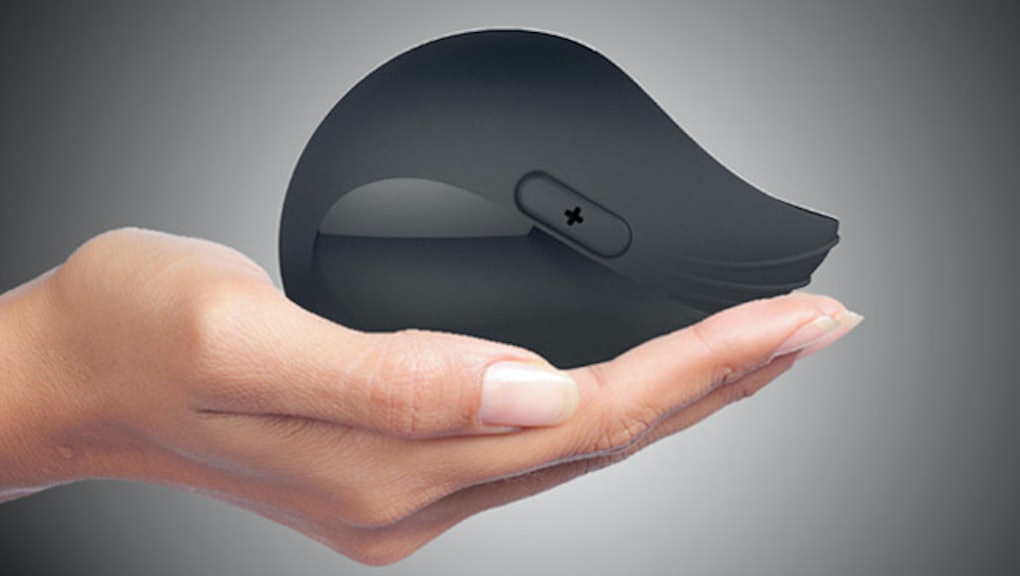 The future of sex toys for men won't feel like sex at all.

Instead, it'll feel like tiny pistons tapping against the frenulum, the fold of skin near the head of the penis. This "guybrator," as it's called, won't stroke. It won't suck. It oscillates: The wearer will slide it over his penis and a pulsing plate will tap against it, making it hard and ultimately bringing it to orgasm.

Lewis is the co-creator of the Pulse II, the guybrator described above. It's different from what you might consider a typical male sex toy, such as the Fleshlight, a toy made to resemble an artificial vagina that's frequently touted as the best-selling male sex toy in the world. If you didn't know you were supposed to stick your dick in it, it wouldn't look like it would be used for sex at all.

That's part of the appeal.

"The guy that has a Fleshlight, it's like saying if he wasn't a woman, he can't get one, so that's why he has a Fleshlight," Lewis told Mic. "That's how people would see it. But if a woman has a Rabbit under her bed, you wouldn't make that association, because the Rabbit doesn't replace a guy. It's a different experience."

Traditionally, there have been few options on the sex toy market available for men, or at least not as many as there were for women. Fortunately, there's evidence to suggest the stigma is loosening its grip on the conversation. Now there's Tenga's sleek-looking Zen model, the clunky but apparently awesome-feeling Autoblow 2, and Lelo prostate stimulators.

Brian Sloan, inventor of the Autoblow 2, is confident that it will one day become just as acceptable for men to own sex toys as it is for women. "I guess it's kind of a double standard, that it's normal now for women but it's not yet normal for men," he told the Daily Dot last year. "But I gotta think that it'll equalize. If women's products are being sold at Walgreen's, pretty soon men's products will be, too."

Female sex toys were eons ahead, both in their sophisticated design and the fact that they'd evolved beyond simulating missing organs to reach a higher level of orgasm. Most designers weren't trying to make toys that resembled penises. With vibrators like the Form 2 from Jimmyjane, which more closely resembles a pair of bunny ears than an actual phallus, designers were creating sensations that couldn't be replicated organically, without some impressive skills or alien anatomy.

The need for high-tech sex: But Lewis's goal raises a question: Are men even interested in using sex toys to begin with? After all, given how much easier it is for men to reach orgasm versus women, there's a common conception that men don't need elaborate gizmos to get themselves off; all they need is their hand and a squirt of lube, and they're good to go.

When Mic surveyed men between the ages of 23 and 53 about male sex toys, a few of them echoed this sentiment. "Best to keep self pleasure simple, albeit with some visual stimulation if desired," John* responded. "I've also heard the cleanup of toys, such as Fleshlights, can be a bit onerous. More than a couple Kleenex and hand wash."

"Wish there was less stigma about butt toys," Tom* wrote. "Some guys need a plug up the butt, and maybe they would be less aggressive and assholish."

Lewis said he's seeing a steady rise in male sex toy interest, and he hopes it continues to grow. Hot Octopuss has already gotten a head start on cornering the burgeoning market. A Hot Octopuss representative said since the launch of the Pulse I in 2013, the company has achieved 350% annual growth, indicating the company is feeding a demand for male-oriented sex toys that most designers didn't know existed.

"The two biggest reasons there's a stigma to male sex toys is because they're thought to replace reality, and their form isn't the most desirable to be associated with," Lewis told Mic. "The market really wants something more sophisticated. ... The more people come up with desirable male products, the bigger the market."