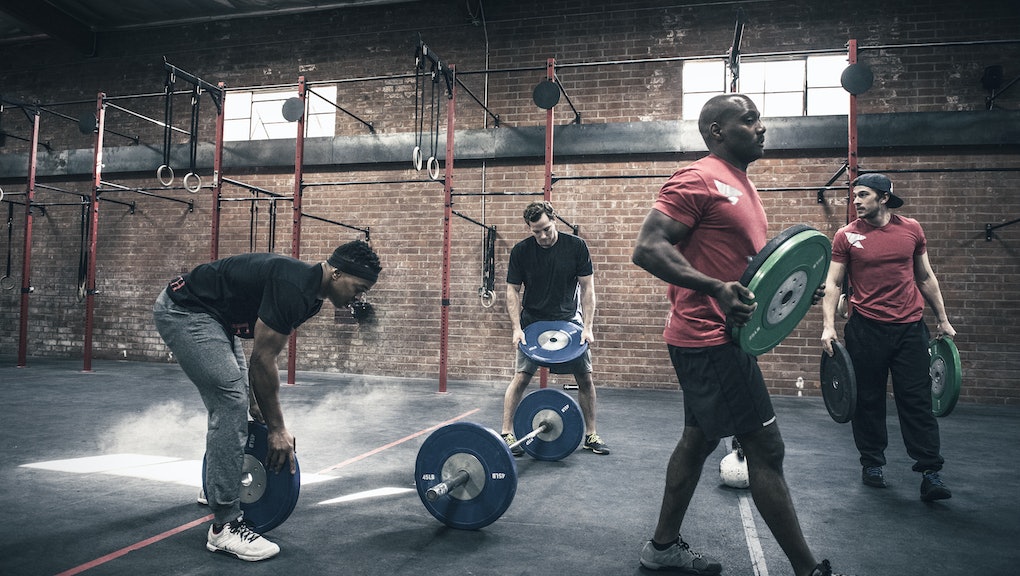 What Men's Fitness Obsession Really Says About Us All

When it comes to taking selfies, all sexes are guilty. But a poll by HTC reportedly found an interesting difference: Seventy-six percent of men's selfies showed off their bodies, while only 45% of women's did. "Women are more likely to share facial selfies (55%) whereas men are most likely to show off their chest (20%), followed by their torso or six-pack (17%)," reported the Telegraph.

More than ever, we're devoting ourselves to our bodies. According to a 2014 Nielsen survey, 81% of millennials say they exercise or would like to, compared to 61% of baby boomers. Moreover, 76% of "regular exercisers" are between the ages of 18 and 34. CrossFit, P90X, barre, spinning — every month seems to bring a new fitness trend to jump on.

Working out, however, tends to look different for men than it does for women. And from the men that Mic spoke to, getting a stronger body can reflect a high-pressure drive to meet "beauty" standards — and to live a lifestyle that reflects them.

For men, beauty standards are body standards. While women's beauty standards push them to beautify — through hairstyling, skincare and makeup — men's "standards" seem to fixate on the body, said several men who spoke to Mic.

Jeff,* a 28-year-old attorney, said sticking to his gym routine makes up where he lacks in the fashion or grooming department. "It gets me in a position where I can sort of slack elsewhere," he said. "It's easier to look good even in just a T-shirt when your body is where it needs to be."

But as with any beauty standard, the ideal men's body is a moving target. Some men seek out bodies that are muscular and cut, while others are looking for trim and athletic builds. Like selecting an avatar in a video game, choosing the body type you want to present to the world means considering how you want to seen. A CrossFit body, for example, sends a clear message about the lifestyle you lead.

These days, more men seem to feel the pressure to get a muscular but lean "soccer body," a la Cristiano Ronaldo.

Alex, a 25-year-old bartender, told Mic, "I don't want to get too swoll. I want to be lean, trim, and I don't want people thinking of me as some meathead. That's not who I am."

Tim Walker, a 34-year-old personal trainer from England, described the desired body type to Esquire U.K. as Brad Pitt in Fight Club. "He looks great, but he's not massive," Walker said. "He's just got really good abs, good arms and an all-right chest. And that's what people want: to be lean, have a six-pack."

It's a body that's particularly good for the slim-fit clothes that are so on-trend for men. "I need a body that looks good in a suit," Devin, 24, told Mic. "Something work acceptable."

It's not just exercise; it's an entire lifestyle to strive for. Having that trim, muscular body doesn't just tell the world that you exercise. It can send the message you're an intense personality or a high achiever in and outside the office — or that you have a lot of money. Clad in a SoulCycle shirt or carrying a duffle bag bearing a boxing gym's name communicates even more. More than ever, fitness is lifestyle.

Classes have played no small part in that. According to the 2014 Nielsen Global Consumer Exercise Trends Survey, millennials are more drawn to group classes than older generations, finding community and a broader lifestyle ethos to adhere to.

The biggest factor, however, may be social media. "Gym culture" goes as far back as the early 19th century, Jesper Andreasson and Thomas Johansson write in their 2014 article "The Fitness Revolution." As fitness became more global, they note, so too did "a global body ideal," displayed in advertisements and consumer culture.

Accounts like B.U.F.F. Dudes turn workout culture into a shared community by creating a fun, humorous vibe while guiding followers in all aspects of healthy lifestyle not limited to fitness. Trainer Jay Cardiello's much-followed Instagram is filled with workout photos but also food and memes, creating a broader sense of lifestyle his followers can share.

If our bodies are our temples, we're constantly being shown everyone else's renovations — and which religion everyone adheres to.

That can be a burden for young men in particular, for whom body = beauty. "[Men today] kind of grew up in the era where male bodies were starting to become under the scrutiny of beauty standards that women were in," Temple University senior Ying Zhang told USA Today.

Thankfully, not all social media is self-aggrandizing or anxiety-inducing. In fact, those fitness photos can promote acceptance. Mark, a 26-year-old a graphic designer who doesn't work out, told Mic he likes them.

"Tumblr allows you to find communities that celebrate whatever body type you have," he said.

The more fitness lifestyle can be a force for good, the healthier everyone will be. In the meantime, it's worth remembering that all those gym selfies from guys aren't always just showing off. Everyone, after all, wants to belong.