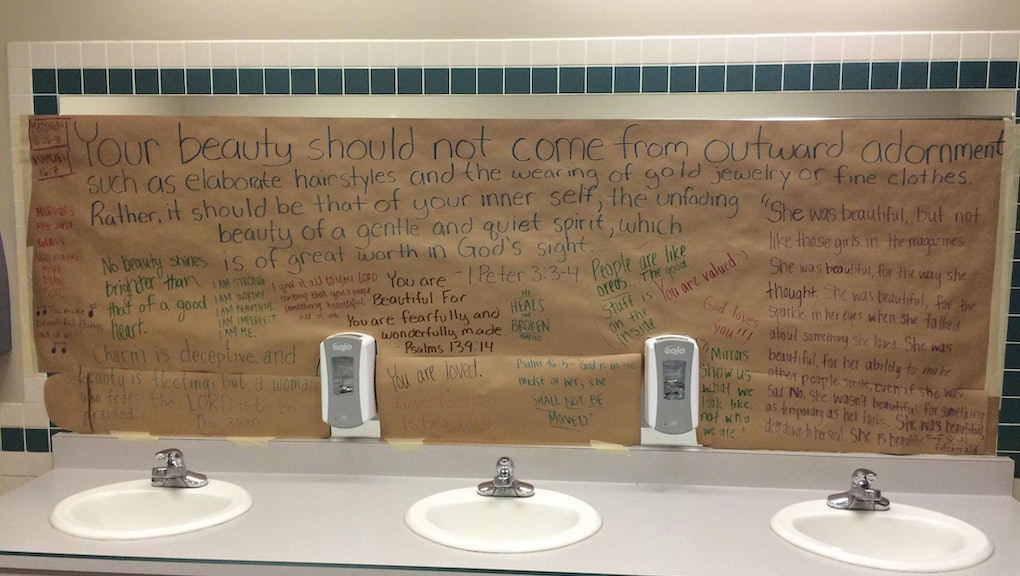 These High School Girls Covered Up Their Mirrors With Powerful, Body-Positive Messages

If you ever need reassurance that not all teenagers are awful, this is a pretty good one: A group of private school girls in Wichita, Kansas have decided to #BanMirrors to promote self-love and body image.

Earlier this week, the Trinity Academy seniors took to the girls' bathroom to plaster body-positive mantras all over their mirrors, which they claim is part of an effort to make younger students feel better about themselves.

An array of affirmations: "People are like Oreos," reads one of the sayings. "The good stuff is on the inside." Elsewhere on the brown paper are Sharpie-scribbled reminders that "you are valued" and "no beauty shines brighter than that of a good heart."

Because Trinity Academy is a Christian high school, the mural also features a ton of Bible verses and references to God.

"We were trying to think of ideas of how we could serve the underclassmen and make the most impact," one of the girls behind the project told local CBS station KWCH. "Especially as freshmen and sophomores, you're trying to find your identity and who you are, and we want them to find their identity in God and in Christ and not in a mirror and not what their outward appearance looks like."

Powerful? Or problematic? While it's refreshing to see efforts made to encourage young women to love themselves for who they are, some are apparently concerned that by covering up the mirrors, the project risks having a counterproductive effect and shaming women for their bodies.

As a tipster whose sisters attended the Trinity Academy wrote to Jezebel:

"I get that it's trying to be positive about the girls... but it feels to me like they're papering over the mirror because they can't go all out and ask the girls to wear paper bags themselves. Believe me, I grew up in this culture, and being told 'your beauty should not come from outward adornment!!!' just sounds like MORE exhausting shaming and policing... Leaving that culture has given me significant mental health gains."

Hopefully, the motives behind the project are genuine and it's not part of an effort to shame girls into hiding their bodies. But at the end of the day, the mirror affirmations serve as a reminder to embrace your inner beauty and give yourself a nice pep talk every morning — though we'd like to think that could still be accomplished with a visible mirror present.