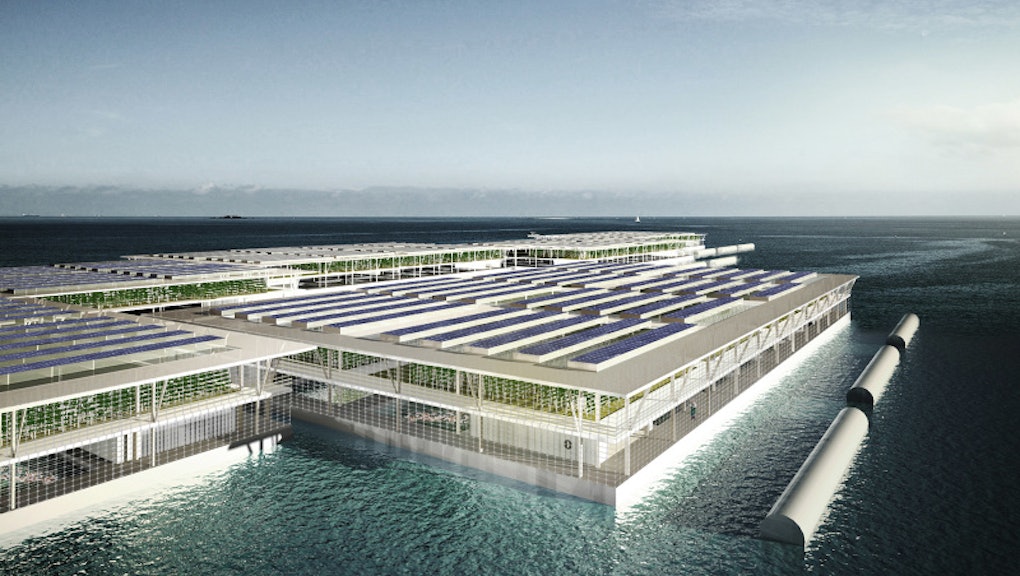 If a Spanish design firm had its way, all of our food would come from colossal floating farm barges.

Forward Thinking Architecture, a Barcelona-based group focused on sustainable design, imagines large, three-story farms that float through the ocean powered by solar panels. The Smart Floating Farms would house massive hydroponic farms and, beneath them, fish farms, making each barge a nearly self-sustaining, veritable grocery list of items for a clean, healthy diet.

According to Smithsonian.com, the designers want each barge to be 656 by 1,150 feet (for reference, the Chrysler Building is 1,049 feet tall), totaling 2.2 million square feet across all of its levels — and that could be increased, since the barges would be able to fit together to create gigantic farms depending on available space. Given that it's the ocean, space probably won't be a problem.

Aside from the area being used for actual growing of plants (automated hydroponics) and hatching of fish, there would be water-access points and a desalination plant (to convert ocean water to fresh water and then use it for farming), a slaughterhouse for the fish and an area to package products for sale. Solar panels, wind turbines and wave energy converters could turn environmental forces into usable electricity.

It could potentially yield 8.1 tons of fruits and vegetables and 1.7 tons of fish annually.

Kind of like the fictional, fully automated factories of Silicon Valley's Hooli company, the factory would be almost completely automatic, using sensor systems to record data and fine-tune the farms to run as efficiently as possible. The difference is that this one could potentially yield 8.1 tons of fruits and vegetables and 1.7 tons of fish annually.

Right now it's an extremely ambitious concept, relegated mostly to dreams and mock-up designs. But it poses an important proposition: We could feed ourselves with minimal constant expense if we just use inexhaustible resources like the sun and the ocean.

It's an optimistic new player in a growing group of people and companies trying to keep our planet from running out of food, and another company with plans to harness the planet's oceans for power.

Again, it's extremely optimistic, and takes a lot of moving parts. But if it takes off, this could be an incredible way to keep farming and food demands from encroaching on land, potentially feeding billions of people in one of the most innovative ways possible.