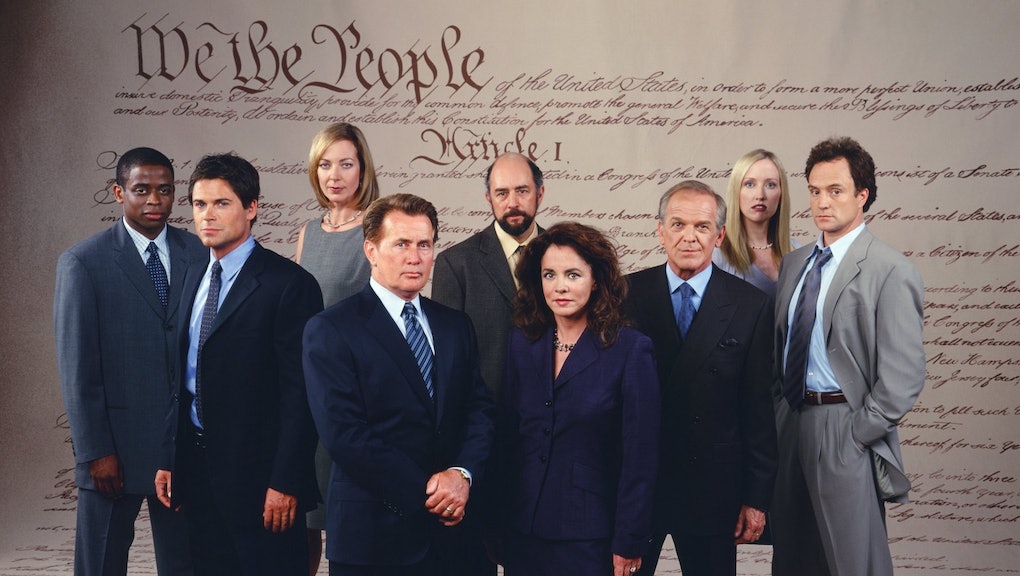 9 Times ‘The West Wing’ Was the Smartest Show on TV

For the seven seasons The West Wing was on the air, it was a beacon of sanity during tremulous political times. The United States shifted from presidents Bill Clinton to George W. Bush, found itself attacked on domestic soil and launched into a nearly decade-long war. Watching real-world politics was increasingly a dire proposition.

Yet The West Wing showed a more positive picture: one of idealism and optimism in the face of increasingly grim circumstances. President Bartlet and his merry band — C.J. Cregg, Josh Lyman, Sam Seaborn and more — were the kind of political operatives we wished we saw on CNN and Fox News. It helped that they were so damn smart.

To illustrate the point, we've collected some of the instances in which The West Wing proved itself the smartest show on TV. Here are nine that have us demanding a Bartlet presidency now.

In season two's "The War at Home," poll-anxious Josh gets frustrated over some numbers from the Midwest about gun control. He's resigned to the fact that they'll have to tone down their anti-gun rhetoric — until his pollster Joey Lucas says the opposite is true. To lead means pushing to get through to one's audience versus taking a backseat. "Numbers lie all the time," she says, because they're just numbers. It's what you do with it that matters.

Best quote: "These numbers mean dial it up. Otherwise you're like the French radical watching the crowd run by and saying, 'There go my people. I must find out where they're going so I can lead them.'"

Making a case for gun control

The West Wing's first season closed out in dramatic fashion: an assassination attempt on the president. The first episodes of season two, including the two-part premiere "In the Shadow of Two Gunmen," explored the political and emotional aftermath of the incident.

One particularly powerful moment comes as press secretary C.J. addresses the White House correspondents. Instead of focusing on Bartlet's near-assassination, C.J. talks about the hundreds of murder, rape and robbery victims threatened by guns the same night. It's a truly damning indictment of the United States' lack of gun control policies.

Best quote: "If anyone thinks those crimes could have been prevented if the victims themselves had been carrying guns, I'd only remind you that the president of the United States was shot last night while surrounded by the best-trained armed guards in the history of the world."

Season two's "The Midterms" features one of the series' iconic monologues: when Jed Bartlet uses scripture to destroy a Christian radio talk-show host. It's the kind of Aaron Sorkin fist-pump moment that gets eagerly shared on social media (see also: The Newsroom on why the U.S. isn't the greatest country in the world). Here, though, it's deserved. Here, the rapier wit and incredible intelligence are used to deliver a point well worth making.

Best quote: The entire dialogue that turns the scene into a gasp-worthy one is peak Sorkin.

Explaining why being liberal isn't shameful

This is a theme The West Wing would revisit later, but season three's "Gone Quiet" was the first to explore why the word "liberal" shouldn't be a slur. Campaign manager Bruno Gianelli, in a burst of anger, explains why he wants Bartlet to be a tougher liberal. "I am tired of working for candidates who make me think I should be embarrassed to believe what I believe," he yells. It's a teachable moment about living by your principles.

Best quote: "We all need some therapy, because someone came along and said 'liberal' means soft on crime, soft on drugs, soft on communism, soft on defense and we're gonna tax you back to the Stone Age, because people shouldn't have to go to work if they don't want to."

This clip went around quite a bit in 2011 when the U.S. was going through its own debt ceiling crisis. Like deputy press secretary Annabeth Schott in the sixth season episode appropriately titled "Debt Ceiling," Americans couldn't quite figure out what "debt ceiling" actually meant. To tell the truth, we still don't quite know — but we know more thanks to The West Wing.

Best quote: Nothing quite encapsulates confusion about the debt ceiling like the closing lines between Annabeth and communications director Toby Ziegler.

Annabeth: "So this debt ceiling thing is the end of the world or routine?"

Detailing the pains of addiction

While most of The West Wing's intelligence is reserved for the political sphere, it has shining moments of knowing exactly what to say about the personal sphere as well.

In the season one episode "Take Out the Trash Day," chief of staff Leo McGarry confronts a staffer (played by Gilmore Girls star Liza Weil) who leaked information about his alcohol and drug addiction. As it turns out, her father was similarly an addict. As he explains his own situation, they grow together, Leo even letting her keep her job.

Best quote: "I drank and took drugs because I'm a drug addict and an alcoholic. I'm not cured. You don't get cured. I haven't had a drink or a pill in six and a half years — which isn't to say I won't have one tomorrow."

Admiral Percy Fitzwallace's monologue about "don't ask, don't tell" wasn't quite as iconic as the aforementioned radio talk show host speech, but it was maybe more realistic. In season one's "Let Bartlet Be Bartlet," Sam is debating with a couple of military officers about gays in the armed forces. When he's met with steely opposition, their commander comes along to deliver hard truths about what disruption in the military really looks like."

Best quote: "The military wasn't designed to be a unit of social change. Problem with that is, that's what they were saying about me 50 years ago. Blacks shouldn't serve with whites. It would disrupt the unit. You know what? It did disrupt the unit. The unit got over it."

In season six's "A Good Day," Toby finds himself opposite a group of kids with a cause: lowering the voting age. It's the kind of moment that, in other shows, might be played as a joke. Instead, they get the chance to plead their case, led by one particularly precocious boy. Seeing him get to question the president directly is both intellectually satisfying and totally heartwarming.

Best quote: "We're children, and that in itself shouldn't render us meaningless."

Many of The West Wing's surprisingly potent moment came not from offering solutions to social issues, but merely meditating on them. Season four's "20 Hours in America" two-parter features one of those moments when Bartlet speaks at a dinner following a terrorist attack.

Scored by Tori Amos' cover of "I Don't Like Mondays," a song about a mass shooting, Bartlet's speech doesn't come up with the answer to a problem that remains a horrifying part of daily life in the U.S. today. It's a plaintive monologue expressing regret at the loss of so many heroes. The speech strikes right at one's core. It's emotional, heart-wrenching, brilliant writing.

Best quote: "The streets of heavens are too crowded with angels. But every time we think we've measured our capacity to meet a challenge, we look up and we're reminded that that capacity may well be limitless. This is a time for American heroes."