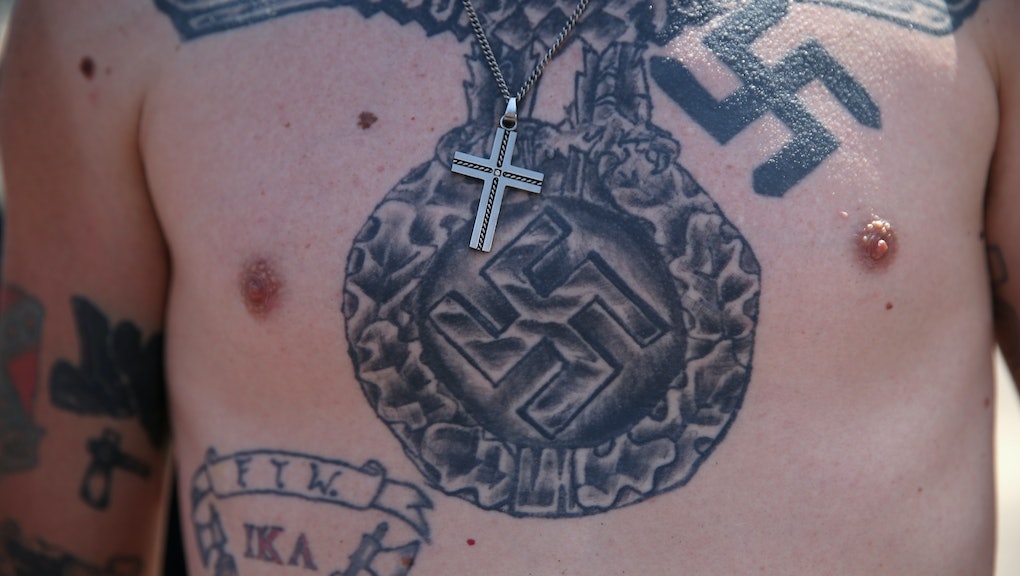 KATC reports Raymond Mott is now threatening to "take legal action" against the town, claiming that his termination was unlawful and included the release of information that put his family's safety at risk.

"I've contacted an attorney already," Mott said, according to KATC. "The picture speaks for itself. I'm standing at a rally against illegal immigration. There's not much to be said about the picture. I've never denied it was me."

The photo in question shows Mott in black paramilitary gear with a Klan insignia emblazoned over his heart. To his left stands another man in the traditional hooded white Klan garb. Both appear to be performing a left-handed KKK salute, with four fingers separated to symbolize the four "Ks" of the Knights of the Ku Klux Klan.

The rally reportedly took place in August 2014. According to the Southern Poverty Law Center, it was hosted by the Loyal White Knights of the Ku Klux Klan, reported to be one of America's largest Klan groups.

The decision to fire Mott was made unanimously by Lake Arthur's town council after he declined multiple requests to resign. The town's police department has also called for a retroactive review of his arrests, which will be checked for evidence of bias.

Mott has previously served with the Iberia Parish Sheriff's Office and the Jennings, Youngsville and Eunice Police Departments, all in Louisiana.

The town of Lake Arthur is located in southern Louisiana, approximately 80 miles east of the Texas border and 180 miles west of New Orleans. According to U.S. Census estimates, 2,735 people lived there in 2013. Eighty percent were white, 17% were black.

"The FBI has warned of active hate group members infiltrating law enforcement as recently as 2006."

In July 2014, multiple Lake Arthur residents reported to local news station KPLC that they'd found Ku Klux Klan recruitment fliers in Ziploc bags on their lawns. A local Klan member reportedly contacted the station shortly after and told reporters that the "group simply [wanted] to bring awareness to the area and that they're law-abiding and not violent."

This is far from the first time law enforcement officers have been outed as hate group members in the United States in recent years. Two police officers in Anniston, Alabama, were recently revealed to be members of the neo-Confederate group League of the South. One eventually resigned, the other was fired.

In Fruitland Park, Florida, no fewer than three police officers were fired between 2009 and 2014 for being members of the local Klan chapter. Three other Florida state prison guards were charged in April with conspiring to murder a black former inmate. All three were Klan members.

The FBI has warned of active hate group members infiltrating law enforcement as recently as 2006. Police in the United States have killed 202 black people this year, according to the Guardian.