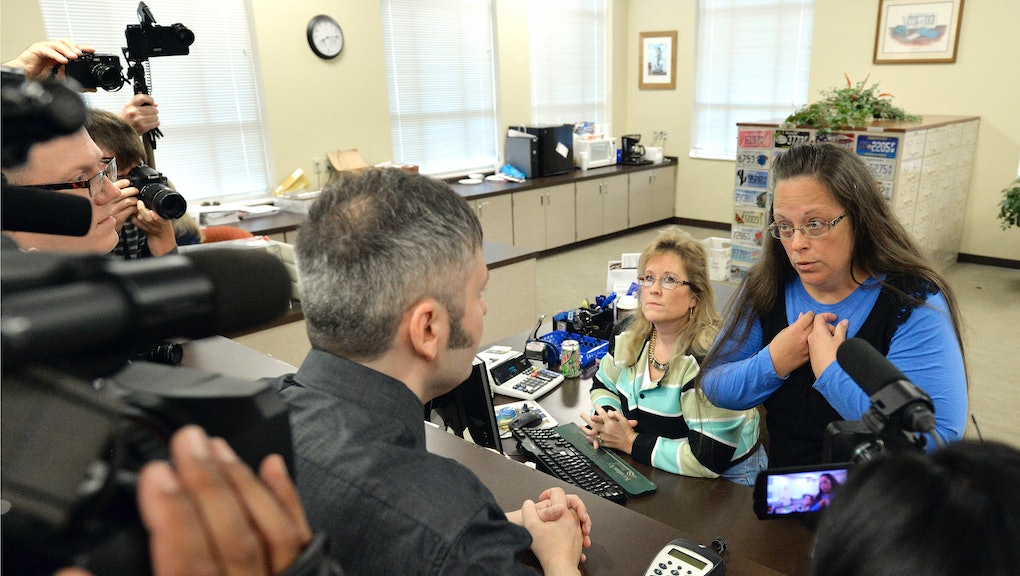 Kim Davis, the Kentucky county clerk at the center of a media firestorm for defying the Supreme Court's historic ruling on same-sex marriage, was taken into federal custody on Thursday after a federal judge found her in contempt of court for refusing to issue marriage licenses to same-sex couples, WKYT and the Associated Press report. The judge said Davis would be jailed for ignoring a Monday Supreme Court order that she start issuing licenses, something she stopped doing for all couples in June.

In a motion to have Davis removed from her post as a government employee, attorneys from the American Civil Liberties Union said Davis "continues to collect compensation from the Commonwealth for duties she fails to perform," CNN reports. Davis faced fines or jail time for defying her court order.

On Thursday, United States District Judge David Bunning told Davis she would go to jail until she agreed to issue marriage licenses again, WKYT and the Associated Press reports. Davis was an eleced official meaning she could not be fired from her post at the county clerk's office, the Huffington Post reports. However, Davis could be removed for being charged with a crime or be impeached by the state legislature.

The decision comes months after Davis found herself recorded on a viral video illegally denying a gay couple a wedding license, despite the Supreme Court's 5-4 decision in Obergefell v. Hodges in June granting same-sex marriage equality throughout the U.S.

"To issue a marriage license which conflicts with God's definition of marriage, with my name affixed to the certificate, would violate my conscience," the county clerk said in a statement released by her attorneys Tuesday. "I have no animosity toward anyone and harbor no ill will. To me this has never been a gay or lesbian issue. It is about marriage and God's word."