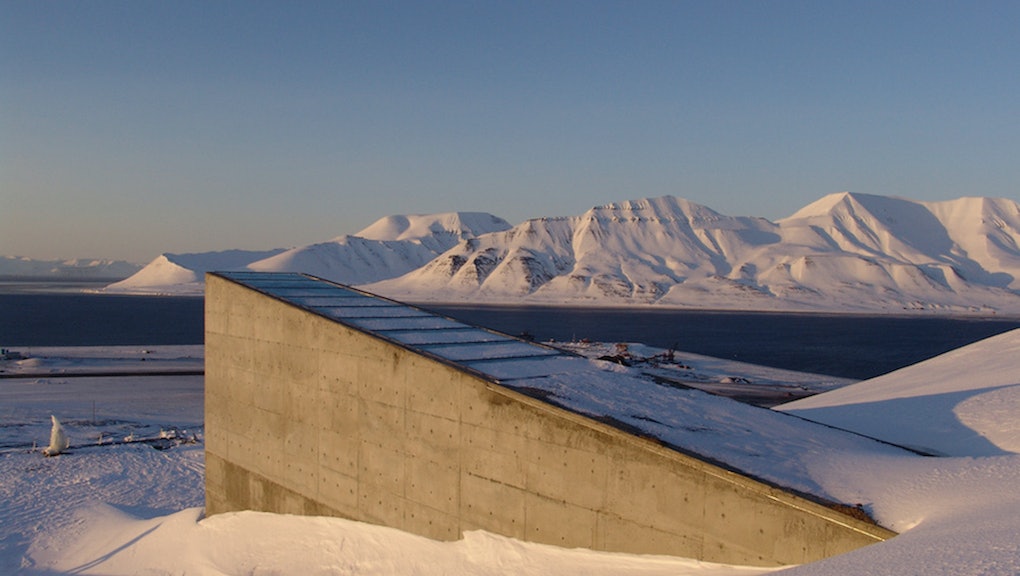 Norway's Underground Seed Vault Could Save Humanity From Extinction

The end of the world.

It will happen... one day. How and when have long been a subject of fascination for humans whether chronicled in mystical Mayan prophecies, explosion-filled movies or supervolcanoes.

Against the litany of grim possibilities, however, humanity has a secret weapon. In the frozen tundra of the Svalbard archipelago, near an abandoned coal mine, the Norwegian government has assembled one of the most comprehensive "seed vaults" in the world.

With all the trappings of a James Bond archvillain's lair, the vault is almost entirely located deep within a sandstone mountain. Jutting out against the forbidding Arctic landscape, the vault serves as a reference library of last resort, safeguarding the seeds to the world's most precious crops in the event of global catastrophe.

"Protecting seed germ plasm against calamity, war, etc. is very important for mankind, especially since the vast majority of seed used today is hybrid," Christopher Lambe, director of strategic initiatives at the Agriculture and Food Security Center of Columbia University, told Mic. "I think no matter the cost, it is more than worth it."

The Svalbard Global Seed Vault started with humble beginnings, when a number of Nordic countries began an ad hoc effort to use an abandoned mine shaft to store excess seed supplies. The naturally cold climate and thick permafrost was an ideal environment for preserving the viability of seeds, and the Norwegian government quickly expanded the scope of the project. Formal construction of the Svalbard vault commenced in 2006 and was completed two years later. The vault operates in partnership between Norway and the Global Crop Diversity Trust.

Today, Svalbard holds 860,000 seed samples, with a capacity of 4.5 million; each sample contains 500 seeds. Since opening, the vault has received donations from all over the world, with countries from the United States to North Korea entrusting Svalbard with copies of their most precious resources. After the seeds are delivered, employees transfer them down the vault's long tunnel before ultimately classifying them and organizing them on shelves, within the main chamber.

Unlike most living things, seeds can survive an exceptionally long time. In 2005, Israeli researchers successfully germinated a 2,000-year-old date palm seed, which they reported at the time was thriving. The job, however, of keeping millions of seeds viable, potentially over decades, is considerably more difficult. According to the vault website, all seeds are stored at minus 18 degrees Celsius in custom made "four-ply foil packages." The low temperature helps ensure limited metabolic activity, extending the life span of seeds for decades, if not hundreds or even thousands of years.

If the facility's cooling system fails — which has already happened at least once — the site's natural permafrost provides additional insurance for the vault's precious contents.

As climate change and a growing global population increase pressures on the traditional food supply, the mission of the seed vault could not be more timely.

"Nutrient and water availability and climate change are going to cause some fairly radical readjustments in agriculture if you look down the road any distance," Cary Fowler, the former executive director of the Crop Trust, told the Atlantic in 2012. "One of the things that differentiates us, the people involved in the seed vault from others, [is] we do tend to have a long view of what's going to happen and we're trying to plan for that."

In addition to climate change, Fowler also cited water and nutrient scarcity and humanity's move to more meat-based diets as threats the seed vault and other efforts will have to mitigate.

Mic reached out to Fowler who was unavailable for comment.

"We're not saying that we have a crystal ball and that we know what's going to happen and we know what's needed, but we do know that the diversity we have represents an immense number of untapped options, and what we're trying to do is keep all of those options," Fowler told the magazine.

So when the blight does come — as it did in Interstellar — and the world supply of Okra or other crops are destroyed, fear not. Svalbard will be there.