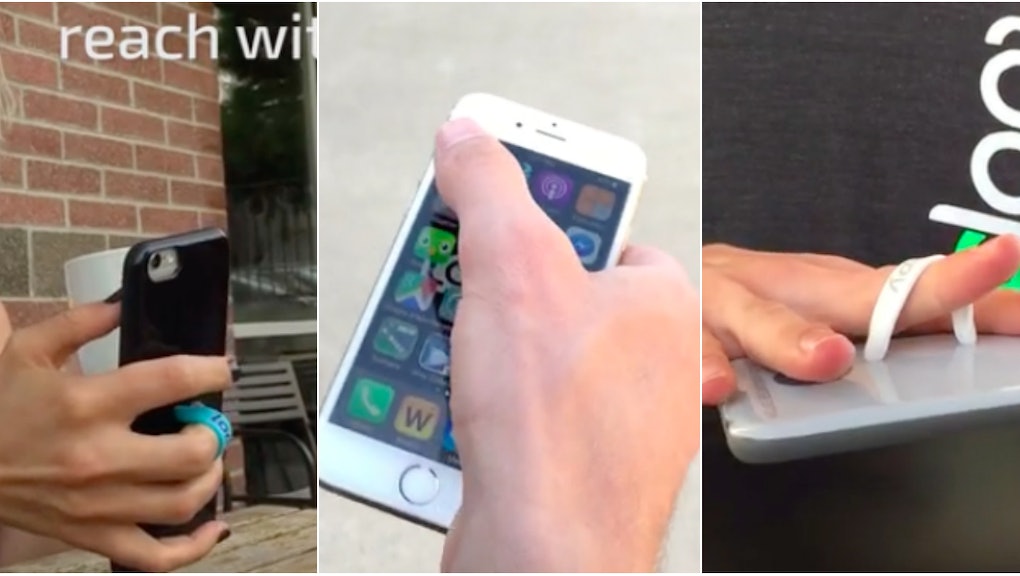 "What's that on your phone?"

Questions like that are nearly guaranteed when you use Loopy, an iPhone case aimed at solving one of the popular smartphone's biggest problems. The wider, lighter and sleeker they get, the harder iPhones are to actually grip, as evidenced by the industry developing around fixing cracked iPhone screens. And the bulky cases that prevent that breakage aren't exactly attractive.

Loopy, which is in its final week of Kickstarter funding, has a solution: Put a small loop into the back of a slim iPhone case, so you can secure your phone on your finger and never drop it again.

"Our dad dropped his brand-new iPhone only moments after leaving the store," Loopy CEO JT Wangercyn, who debuted the concept with his brothers in 2013, told Mic. Bulky cases prevented cracking but didn't prevent the drop entirely, while the thin cases made it even easier to lose a grip on and more likely to crack. "So we made a case that protects against drops but also keeps the slim, comfortable design of your phone."

Wangercyn's father's phone was an iPhone 4s — definitely a hardier device, but still prone to cracking. A 2012 survey found 6% respondents had taped up their iPhones due to breakage, while 11% used them with cracked screens. A 2013 survey found 23% of the over 2,000 iPhone owners surveyed were walking around with a broken, smashed or cracked phone.

Now that number's likely higher, considering how massive (and injury-inducing) our phones are. It doesn't help that the newest iPhones have "completely flat backs and slippery finishes," as Forbes noted, and that we insist on clutching them in our hands at all times, rather than, y'know, putting them in our bags or backpacks.

So, a plastic loop. The designs on Kickstarter, which have earned Loopy $93,391 of a $30,000 goal as of publishing, are slim, shiny and somewhat rubbery — already an easier-to-grip texture — and each feature a plastic loop, about the size and texture of a LiveStrong bracelet.

Loop your finger in it while grabbing for that latte or when trying to reach the upper row of apps. It might feel a little cumbersome at first, as this writer can attest. But hey, it works.

Wangercyn said the Kickstarter campaign will help develop more designs, including loops with patterns. That said, customers might want to stick with a subtle one — it's not like these are trendy marble cases or designer brand ones. Plus, wearing your phone around your finger is a little like branding yourself with an "I'm a klutz" badge.

But with cracked screen repairs costing into the hundreds, a little awkwardness might be worth it. We're not used to having things protrude from our phone cases (unless it's some stylish studs or funny animal ears), but a fact is a fact: It's a lot harder for something to slip from your hands when it's tethered to your finger.