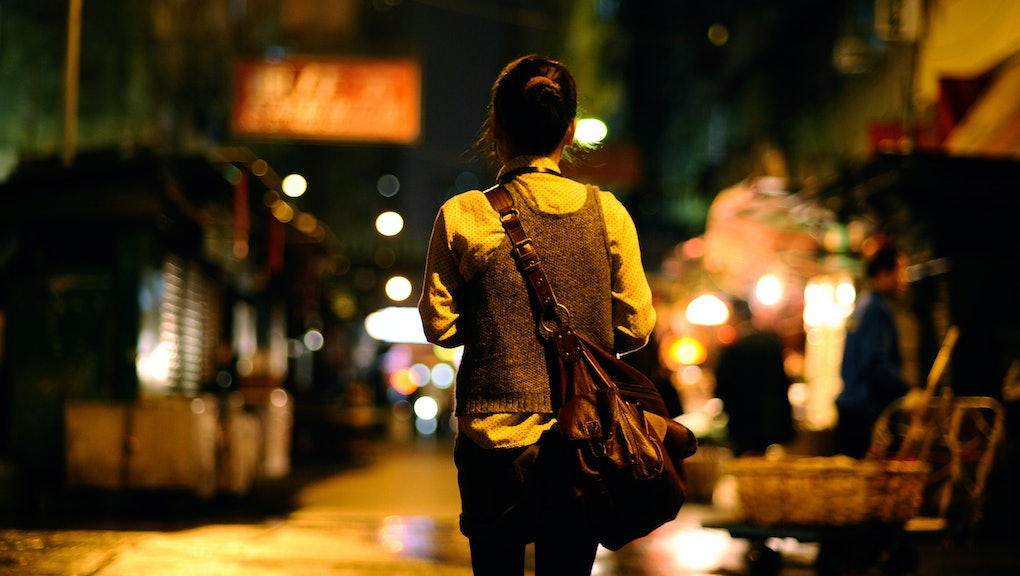 College Students Are Protecting Themselves On Campus, Thanks to These Apps

Walking home alone at night can be incredibly stress inducing. That's why we all have our own ways of assuaging our fears and trying to make ourselves feel safe. Whether we're texting friends or having pretend phone calls with our make-believe boyfriends, all of these safeguarding methods tend to revolve around our mobile phones.

Now, there's another option: Companion, an app that helps people get home with the virtual assistance of their friends. Developed by a group of University of Michigan students, the app uses GPS tracking to show virtual "companions" where a user is on their journey home in real time. It then notifies them once the person arrives at their destination, but it also includes several other safety features (like a button to quick-dial 911), as well as an option that lets users indicate if they feel nervous in a given area.

The app has been rolled out on a number of college campuses in the Midwest. In the past week alone, nearly half a million new users have downloaded it, according to Danny Freed, one of Companion's developers. Freed says the app's popularity highlights the shortcomings of current campus safety measures in helping students feel safe.

"We came up with Companion after becoming frustrated with the constant crime alerts on campus and lack of awareness of the stationary [campus emergency] blue light phones," Freed told Mic. "With mobile devices in everyone's pocket, we were determined to find a better way."

Companion isn't alone. Freed isn't the only developer to come up with better safety tools for young people walking solo at night. Apps like bSafe, GetHomeSafe and Kitestring, which sends SMS alerts to friends if you don't respond to a text after a given period of time, are also intended to help us connect with our peers in anxiety-inducing situations, such as walking home alone or going on a date with a stranger. All operate according to the same premise: We want to be able to go places by ourselves without being alone.

The fear of walking home alone isn't unwarranted. University crime rates have stayed relatively steady in recent years and aggravated assault remains the most common crime committed on college campuses. A nationwide push to combat campus sexual assault has brought a general concern for student safety to the forefront, which has prompted a number of Midwestern universities to partner with Companion in an effort to increase campus security measures.

But alleviating fear isn't the same as removing a threat. For colleges and universities looking to keep their students safe (or at least bolster their campus safety stats), rolling out an app like Companion is a great idea. But there's an underlying issue with campus security apps that Companion might never be able to fix.

In a world where approximately 25% of women and 7% of men in college report experiencing unwanted sexual contact, it makes sense why college students would be concerned about their safety. Concern about violence and sexual assault is one that women, in particular, learn to internalize from a young age — which might be why, according to Freed, a majority of Companion's users are female, and why much of the press surrounding similar apps (notably Kitestring) focused on women users.

These apps are not limited to women, of course, because neither is being the victim of a violent crime. But they all send the message that crime prevention is at least partly within victims' control. Instead of sending the message that violence (sexual or otherwise) is unacceptable, apps and devices like Companion can place an added burden on victims by implying the onus is on them to protect themselves. Such an attitude "is exactly what leads society as a whole to blame survivors — instead of placing the blame squarely where it belongs, with the perpetrators of the crime," Think Progress' Tara Culp-Ressler noted in a piece on anti-sexual assault measures.

The world isn't going to change overnight. That said, apps intended to prevent violence provide a much-needed service — because even with perfect messaging, random acts of violence won't cease to exist. Eliminating campus assault altogether will require nothing less than a total shift in cultural attitudes. But as student activists rally against school administrations and the conversation surrounding campus safety grows to a fever pitch, students are doing what they can to protect themselves and take a stand against violence.

Hopefully, one day, there won't be a need for apps like Companion to exist. But for now, they're a step in the right direction.