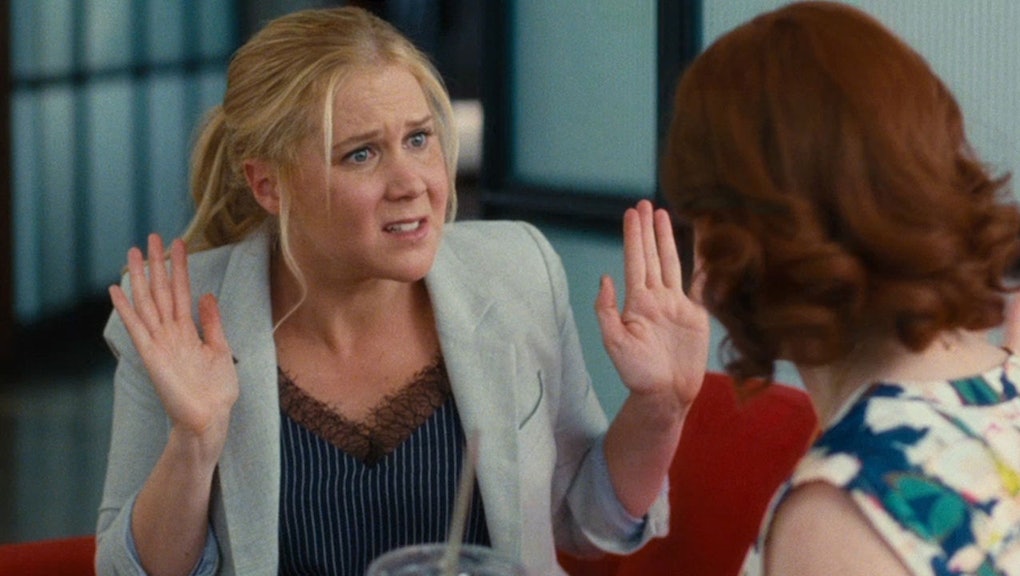 What We're Really Asking When We Ask "What's Your Number?"

In Trainwreck, Amy Schumer's character Amy has a lot of sex with a lot of different men, and she's totally unapologetic about it. At least, she's unapologetic until one irksome scene, in which her love interest, Aaron (played by Bill Hader), asks her how many people she's slept with.

From there, Amy and Aaron get in an epic, hours-long fight, in which she runs through her most unlikable characteristics. But even though Aaron acknowledges his struggles with Amy's substance abuse and limited capacity for emotional intimacy, he admits he just can't get over how many dudes she's been with before him.

It's a conversation that most couples have at some point in their relationship: How many people have you slept with before me? Like Amy and Aaron in Trainwreck, the conversation that follows that question usually isn't pretty, because probing into someone's sexual history doesn't really offer any legitimate insight. It's just a thinly veiled way for you to judge them.

We're really asking "Are you a slut?" In a culture as anxious about sex and sexuality as ours, asking about another person's number is something of a Catch-22: If someone has slept with a lot of partners, they're usually considered promiscuous, and yet if they've only slept with a few people, they're considered inexperienced.

For instance, having a long list of previous partners is the primary indicator that someone is "easy," "loose" or just lax about sex, all characteristics society deems worthy of condemnation. That's especially true for women: If a woman's number is high, she's a slut. Just look at Taylor Swift, who's been extensively criticized by the media for having lots of public relationships with different men — despite the fact that we don't know anything about her sexual history, nor is it any of her business.

Of course, numbers don't reveal much about people's attitudes toward casual sex, nor about the sorts of sexual experiences they've had. A person in a long-term, monogamous relationship could have had 50 one-night stands in a year before committing to one romantic partner for many decades. In the end, a person's sexual history really doesn't tell you as much about them as we think it does.

We're really asking "Have you had more sex or better sex than me?" Judgment is borne of insecurity, which is often at the heart of our questions about other people's sexual histories. When we ask our partners how many other people they've slept with, we want to know how we stack up against them and where we fit into the equation. We also want to know if our sexual histories are "normal," or if we're as sexually experienced as others think we should be. (For the record, if you're actually curious, the CDC determined that the median number of sexual partners for men and women between the ages of 25 and 44 was 6.6 and 4.3, respectively.)

Ultimately, however, how many people your partner has slept with has no bearing on their sexual performance or how "experienced" they are. Whether your partner has had sex with two people or 200, their sexual history likely has nothing to do with how impressive they are in the bedroom, because every one of their partners probably enjoyed something different in the bedroom. It's better to stop thinking about the past and start thinking in the present.

We're really asking "Do I need to get tested?" Earlier on in a relationship, couples might ask "What's your number?" as a way of gauging the risk of their partner having an STI. While we do have a right to discuss sexual health concerns with our partners and to ask about safety, numbers alone can't tell us whether someone has a history of having safe sex or not. While there is a correlation between a person's number of sex partners and the risk of contracting an STI, that's not something that can be determined simply from numeric data alone. The only way to know is to get tested.

Couples don't have frank conversations about sexually transmitted infections often enough. Asking about numbers might seem like a valid stand-in for that conversation, but it's yet another opportunity to avoid something we all need to talk about more openly. There's really only one alternative: Partners have to disclose their STI statuses to each other.

What we should be asking: It's true that we can't learn much about anyone's sexual history — or figure out how we might fit into their sexual present or future — without asking for details. Asking "What's your number?" can be a start to a longer conversation that partners should have about their shared sex lives, but only when it's asked in a nonjudgmental way followed by deeper inquiries.

That means being honest about what it is we really want to know. Is asking about numbers a way to try to get to know our partners better? Or is it just an opportunity to judge them and work through our own insecurities?