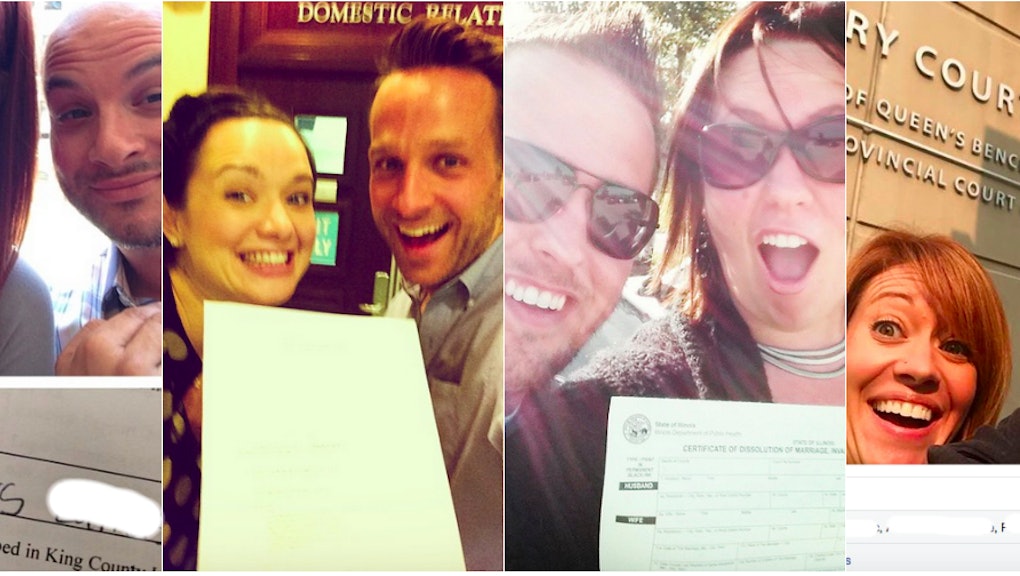 I'm A Child of Divorce and I Think #DivorceSelfies Are 1,000% Bullshit

My parents divorced when I was 8 years old. They argued about everything: money, personality traits, their disdain for each other's friends and family members, and so on. While they tried to keep the ugliness to a minimum in my presence, I often tiptoed to their bedroom door and eavesdropped on their late-night arguments regularly, to the point that their relationship drama became something of my own personal IRL telenovela.

Thanks to my late-night spying sessions, I witnessed firsthand what it looks like when a once passionately in-love couple starts to passionately break up. Had social media existed at the time, I can only imagine what their Facebook timelines and Instagram grids would have looked like during this period or if they would have taken a "divorce selfie," an absurd viral trend commemorating the dissolution of their marriage.

A troubling new trend: The "divorce selfie" is exactly what it sounds like: a photo snapped from the steps of a courthouse, taken immediately after a couple files for divorce. In the photos, both parties are flashing smiles and proclaiming their "unconditional love" for each other while announcing their intentions to "#PutTheKidsFirst."

"We have respectfully, thoughtfully and honorably ended our marriage in a way that will allow us to go forward as parenting partners for our children, the perfect reason that this always was meant to be, so they will never have to choose," wrote Shannon and Chris Neuman, the Canadian couple whose divorce selfie (far right, below) went viral last week. "They'll never have to wonder which side of the auditorium to run to after their Christmas concert or spring play, because we'll be sitting together."

Divorces, while they can bring happiness in the long term, are not fun. At face value, the Neumans' goal of putting on a happy face for the sake of their kids is admirable. Most parenting experts say that keeping acrimony to a minimum and figuring out a healthy coparenting plan are crucial to minimizing emotional turmoil during a divorce. But there's a difference between putting the needs of the kids first and putting on a happy face to spare them the ugly truth: that mom and dad just aren't in love with each other anymore.

Even though that ugly truth will likely be distressing to many children, most kids are going to be affected by divorce, regardless of the circumstances. In fact, a 2005 study that surveyed 1,500 children of divorce concluded that even those whose parents put on happy faces throughout the process dealt with just as much emotional trauma as those whose parents split acrimoniously. Other studies have confirmed that divorce can often lead to children exhibiting possible side effects like insecurity, behavioral problems and extreme stress.

"All the happy talk about divorce is designed to reassure parents," the study's author, Elizabeth Marquardt, was quoted as saying in The New York Times. "But it's not the truth for children. Even a good divorce restructures children's childhoods and leaves them traveling between two distinct worlds. It becomes their job, not their parents', to make sense of those two worlds."

That's not to say these side effects are permanent or that children of divorce can't grow up to be happy, healthy adults. Research shows such negative side effects tend to be short-term, with most children recovering from the emotional trauma of divorce typically after an average of two years.

But there's an adjustment period that comes with watching your parents' marriage end, and as Marquardt's survey determined, that period is basically inevitable no matter what you do.

When my parents broke up, my life changed. Even though their respective new homes were within walking distance from each other, and I had access to both of them whenever I wanted, I still lamented the inconvenience of having to split my time between two bedrooms. I also resented having to go through the process of telling my friends about my new status as a child of divorce.

Even though I struggled with my parents' divorce, an amicable-from-start-to-finish divorce process wouldn't have made it any easier, nor would a Gwyneth Paltrow/Chris Martin-inspired "conscious uncoupling." The only thing that made the recovery process any easier was time, which led to me ultimately coming to the understanding that even though my parents' marriage didn't work out, that didn't mean they loved me any less.

So I'm glad my parents were honest with me about their messy divorce. I'm glad they didn't have social media to help them pretend it was anything less than shitty, and I'm glad I didn't have to be bombarded with confusing images of them laughing with each other in front of a courthouse as if everything was OK. I'm even glad I low-key stalked them during their epic late-night blowouts.

It all taught me a valuable lesson: Some things in life just suck, and there's little you can do to make them any better. Divorce is always going to be one of those things. And it should probably just stay off of social media altogether.