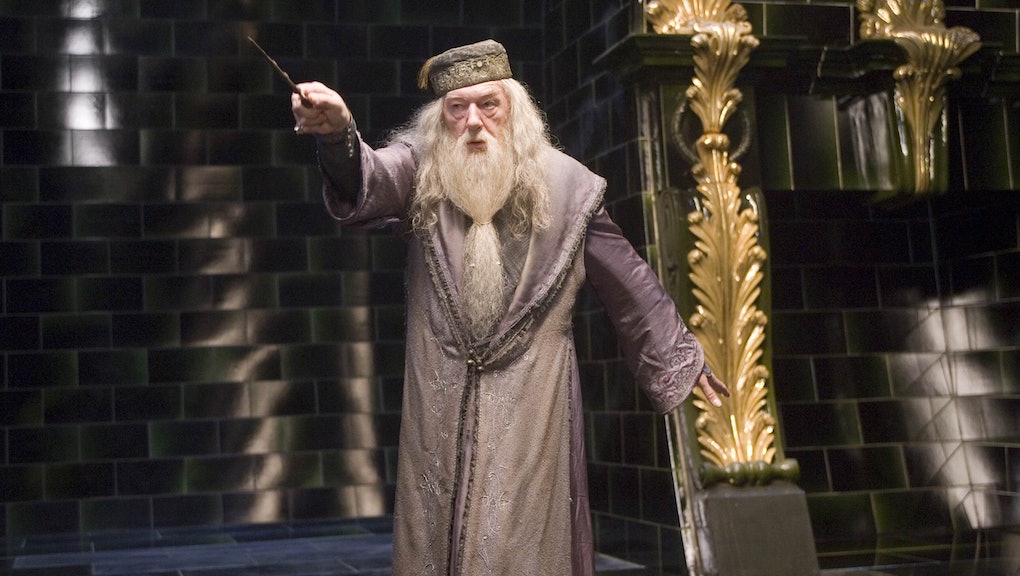 Fans have known for years that Albus Dumbledore was gay. What has gone mostly unnoticed, however, is how queer the series as a whole could be.

Though there were no characters directly called queer in the Harry Potter series, it's always been an LGBTQ-friendly series. Fans have shipped (a fan term for romantically pairing) same-sex characters together for years, and author J.K. Rowling has been a staunch LGBTQ ally. It's hardly surprising for a series that started with a boy living in a closet, about to learn something life-changing about his identity.

So what in the books is particularly LGBTQ-friendly? In addition to the themes of acceptance strung throughout the series, there are particular characters and developments that have a queer bend. Here are five examples in particular.

The most obviously gay part of Potter lore is the character of Dumbledore, though we only learned of his sexuality afterward. Textually, the only evidence we have to parse is the great wizard's relationship with his longtime friend (and dark wizard) Gellert Grindelwald. The two were brought together by mutual attraction — although according to Rowling, an unequal one.

To let the love be unrequited is, on its surface, the less fulfilling one. Why couldn't they have just been in love? Yet the pain of knowing your friend could never match your feelings is a hurt too many young queer people will go through.

At first blush, Harry's second-year Defense Against the Dark Arts professor seems to be a real-life version of the queer cartoon villain. This is further emphasized in the film version of Harry Potter and the Chamber of Secrets, thanks to a fairly effete performance by Kenneth Branagh. By the end of the story, his villainous veneer is revealed to merely be incompetence.

With the mannerisms and personal appearance suggesting the stereotype of a gay man, Lockhart is still a queer character, if not in a positive way. Notably, Rowling has said Lockhart is the only character based on a real person, and a particularly loathsome one at that. "I have to say that the living model was worse. He was a shocker," she said. "The lies that he told about adventures that he'd had, things he'd done and impressive acts that he had committed ... he was a shocking man."

It's an intriguing counter to Rowling and her series' usual pro-LGBTQ nature; painting the man she knew and hated as possibly gay gives the series' queerness some depth beyond surface-level positivity.

References to bromances as queer can be tiresome: Two men sharing something beyond bonding over babes and brew isn't gay, it's just well-written. Yet Harry Potter and the Goblet of Fire, in which Harry competes in the Triwizard Tournament, features a truly intriguing, at-least-queer-ish, moment.

During the tournament's second round, Harry and his fellow competitors have to save a loved one. For Fleur Delacour, it's her sister; for Cedric Diggory and Viktor Krum, it's love interests Cho Chang and Hermione Granger. Whose special someone is Harry's, then? It's Ron.

There's a certain humor to the situation — after all, he had a crush on Cho and is also friends with Hermione. To have Harry's loved one be Ron on the same level as a girlfriend or a sibling, is one of Rowling's queerest flourishes.

Despite vivid female characters in the Harry Potter series, because Harry is the protagonist, we get to see little of women's relationships. (The movies have notable trouble passing the Bechdel-Wallace test.) The most notable female relationship with twinges of queerness, then, is that between Hermione and gossip reporter Rita Skeeter.

Barely shown in the movies but well-described in the books, Hermione and Rita's relationship is deliciously adversarial. When Hermione learns Rita is an illegal Animagus, she immediately puts the woman under her thumb — even blackmailing her for positive press on Harry in Harry Potter and the Order of the Phoenix. Theirs is an example of Foe Yay, or chemistry between nemeses. It's a shame it was mostly cut from the movies, since it's an unexpected delight in the book series.

The Marauders' friendship and Peter's betrayal

Unlike Harry and Ron's friendship, which only has occasional moments, the bond between the Marauders — James Potter, Remus Lupin, Sirius Black and Peter Pettigrew — is intrinsically queer. These friends share an intense friendship broken by betrayal that cuts deep.

It's like an allusion to a complicated web of lovers: One of the lovers is framed for the disloyal actions of another. The traitor's anger is partially fueled by being treated as lesser than the others. The friends are deeply passionate about each other to the point of actually becoming Animagi in union with their werewolf friend Lupin. We never get to see much of their friendship dynamic in either the books or movies, however. Perhaps the universe expansion-happy Rowling can flesh these men out in a prequel?