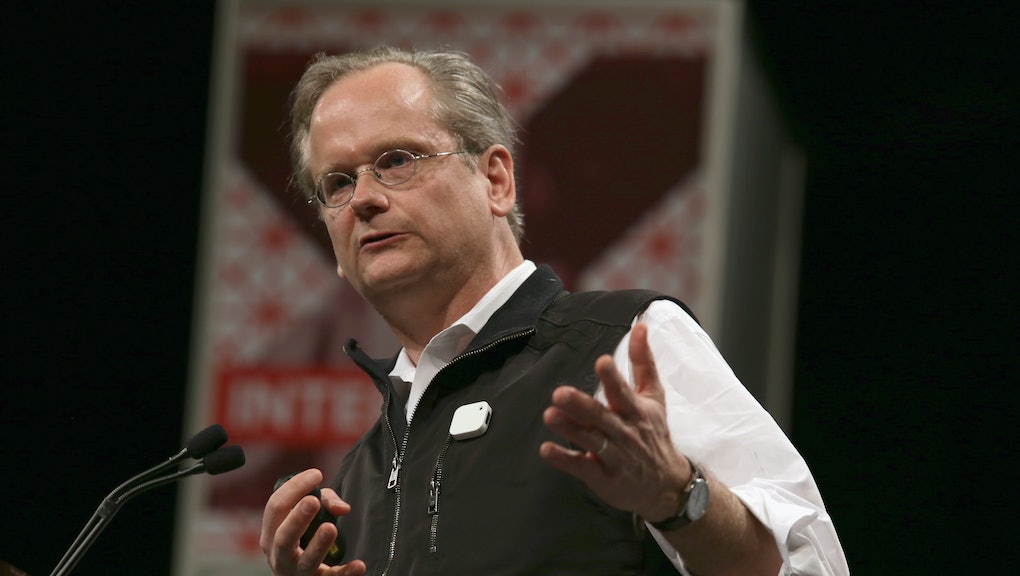 Larry Lessig and Donald Trump might not agree on the cure, but the Harvard Law professor turned potential Democratic presidential candidate and the billionaire Republican frontrunner have similar ideas about what ails the American body politic.

"I've criticized Trump for lots of reasons, but I wouldn't criticize his views on the problem of money in politics," Lessig told Mic over the phone on Thursday. "I think they're spot-on right."

Lessig's assessment of Trump, for all its intellectual honesty, is unlikely to win him many friends in the Democratic Party. Trump has riled establishment figures across the partisan spectrum by boasting that his personal fortune makes him incorruptible. Lessig, however, is pursuing a more fundamental, and in many ways more controversial, change.

Here's the pitch: The popular online intellectual and TED Talk star announced his idea to run for president as a "referendum candidate" in August. His pitch is pinned to the Citizen Equality Act, a partially written bill that would mandate public financing for national political campaigns, overturn restrictive voting laws and put the brakes on partisan gerrymandering.

Most importantly though, Lessig said, the law would undo the taint created by the Supreme Court's Citizens United decision and pave the way for both federal and state elections to "protect themselves from this ridiculous outside money."

Upon its passage, Lessig has pledged to step down and turn over the White House to his vice president. Hillary Clinton, he told Mic, would "of course" be considered as a running mate.

With a self-imposed Labor Day deadline fast approaching, Lessig is closing in on the $1 million in crowdsourced funds he believes are necessary to launch and maintain a potential candidacy. By Friday afternoon, the ticker on the "Lessig 2016" website said the group had raised over $850,000 from more than 7,000 small donors.

"The way these things work, they kind of rally at the end," Lessig told Mic a day earlier. "So, we're hoping we can get a big push going and through the weekend. And if we do, then I'll be in the race."

Burning Sanders: In or out, Lessig has already made waves in liberal waters with his criticism of potential rival Bernie Sanders, the independent senator from Vermont and dogged critic of the current campaign finance rules.

During an Aug. 25 AMA session on Reddit, Lessig seemed to question Sanders' motives, suggesting the self-described democratic socialist had been "seduced by the consultants" and become more concerned with winning an election than advancing the progressive cause.

In his conversation with Mic, Lessig struck a more conciliatory tone, saying Sanders "doesn't get much wrong" on the policy front.

"The only difference between what Bernie is doing and what I'm describing is the mechanism for creating a kind of mandate I think is going to be necessary," Lessig said. "My concern is that if you think of it as one issue among many, you're not going to get this issue, or many other issues, passed."

Not buying it? Despite his populist sentiments, a number of critics, including many on the left, have their doubts about Lessig and his unconventional plan. The most persistent questions center on Lessig's ability, should he become president, to persuade establishment officials from both sides of the aisle to reject billions in campaign funds, while breaking off decades-old ties to corporate interests.

Lessig answers those concerns by describing a self-fulfilling loop in which the fact of his election would create something like a super mandate for Congress to act.

"It's not clear what the arguments are against equality like that."