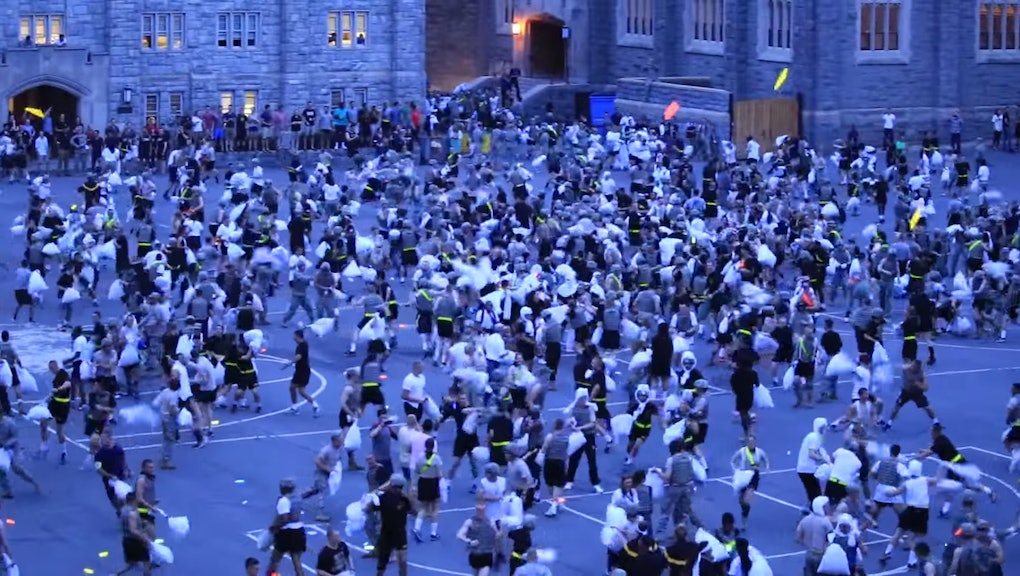 As many as 30 cadets at West Point were injured in August during a pillow fight gone wrong as an annual freshman tradition was marred by some participants who chose to weaponize their pillows.

The New York Times reports the U.S. Military Academy's  annual pillow fight on Aug. 20, in which freshmen cadets celebrate the end of their brutal summer training season with a nighttime pillow brawl, went terribly awry as "some cadets swung pillows packed with hard objects, thought to be helmets, that split lips, broke at least one bone, dislocated shoulders and knocked cadets unconscious." Some 30 cadets left the field with injuries, including 24 concussions.

A video of the pillow fight posted online shows hundreds of cadets involved in the melee. Some wore body armor and helmets, while others wore T-shirts. A few enterprising cadets appear to have made makeshift battering rams and armored personnel carriers out of carts and mattresses.

Some of the cadets told the Times several of those involved, including upperclassmen, expressed pride in the injuries, while some said they could face repercussions for complaining.

In a statement issued to BuzzFeed, West Point officials said they would be investigating whether some cadets intentionally tried to injure their classmates but added that they commended efforts to build the class's "esprit de corps."