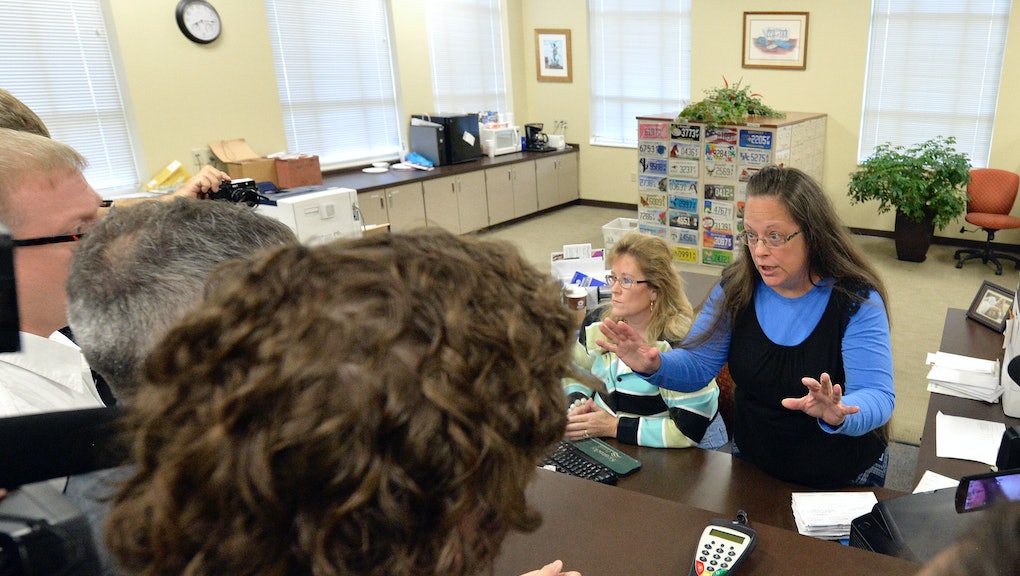 Some Republicans Are Claiming Kim Davis Is Like Rosa Parks

Legal experts are near-unanimous that Kim Davis — the Rowan County, Kentucky clerk who has been held in contempt of court and temporarily jailed for refusing to issue same-sex marriage licenses, despite a Supreme Court ruling legalizing same-sex marriage across the country — is in the wrong.

However, as she becomes a conservative hero for standing up to the federal government, some Republicans have started comparing her to Rosa Parks, the black woman who, in 1955, famously refused to vacate her seat in the colored section of a segregated bus for a white passenger in Montgomery, Alabama.

The same day, the Associated Press reported that "hundreds" of protesters gathered outside the Carter County Detention Center where Davis is being held to lobby for her release. Crowds chanting "Jesus!" surrounded the facility, with speakers demanding her release and questioning what law required Davis to issue same-sex marriage licenses.

They've found prominent supporters, from pastors to presidential candidate and former Arkansas Gov. Mike Huckabee, who says he has gathered over 100,000 signatures demanding her release. On Sunday, Huckabee went on ABC News' This Week to compare the Supreme Court ruling legalizing same-sex marriage across the country to the 1857 Dred Scott decision, which upheld slavery, and told host George Stephanopoulos U.S. citizens were under no obligation to follow immoral court rulings.

"You obey if it's right," Huckabee said. "So, I go back to my question, is slavery the law of the land because Dred Scott said so? Was that a correct decision? Should the courts have been irrevocably followed on that? Should Lincoln have been put in jail? Because he ignored it. That's the fundamental question."

According to the AP, signs at the rally read "'Kim Davis for President,'" "'no to sodomite perversion'" and "'God gives his hardest battles to his strongest soldiers.'"

"More fear man, they don't fear God," Wisconsin pastor Matthew Trewhella told the crowd, according to the AP. "She said that she was doing this under God's authority. She is 1,000% correct. She is echoing what western man has said for over 1,500 years now. And that is that divine law trumps human laws."

Social conservatives seem likely to seize on Davis' resistance as inspiration for legal protection for civil servants who wish to replicate her actions. Her lawyer, Matthew Staver, told the New York Times she was the "poster child for why you need religious liberty exemption laws." Elsewhere, he compared her to Jews persecuted in Nazi Germany.

Republican presidential candidates have mostly sided with Davis, with some like former Florida Gov. Jeb Bush advocating for a middle-ground solution. According to USA Today,  GOP frontrunner Donald Trump supports holding Davis in contempt of court, noting the U.S. is a "nation of laws" and "[she] can take a pass and let somebody else in the office do it." Candidates Chris Christie, Lindsay Graham and Carly Fiorina have also said they believe Davis must issue the licenses.