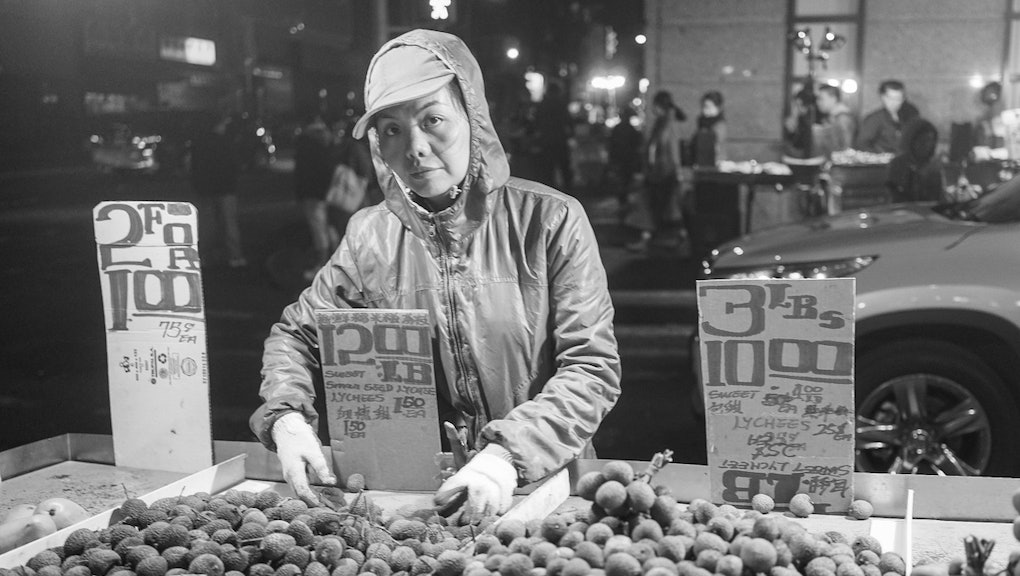 Cynthia Trinh has been snapping photographs for a few months shy of a year. Her work is already having an impact — and it couldn't have come at a better time.

The economy of vendors, cooks, nail salon and textile workers she's captured have since coalesced into "The Model Minority Reality," Trinh's first photo series, and an important pushback against the stereotypes that frame the modern Asian-American experience.

"I wanted to do something that really hit home for me, and that I related to," Trinh told Mic.

As a first-generation Vietnamese-American, the California transplant is intimately familiar with the ways the United States invisibilizes Asians who don't fit a set of accepted stereotypes — wealthy, bookish, successful, yet still perpetually foreign and even non-American.

"I started this after the big New York Times nail salon investigation," Trinh said about the photo series. "I think that was one of those things we all kind of knew was happening, but it took that piece to really hammer it home."

What became clear through that exposé, Trinh said, is that many Asian-American stories are not being told to the general public. "We struggle, too, as an immigrant group in this country. Asian-Americans are regarded as 'the model minority.' ... But it's really damaging for those of us who don't fit the stereotypes.

"It also hides that there's still plenty of racism and prejudice against us."

This has been especially apparent in recent months. When Republican presidential hopeful Jeb Bush told reporters his use of the words "anchor babies" (a derogatory term for children whose non-American parents gave birth to them on U.S. soil to allegedly take advantage of American birthright citizenship) was "more related to Asian people" than anyone else, he inadvertently opened the door to a much-needed conversation about what being Asian-American actually means.

For one, his comments echoed a well-worn sentiment: Asians are an inherently foreign presence in the United States. But the pushback against Bush's framing also revealed an array of experiences that showed how diverse — and uniquely American — this imperfectly defined ethnic category truly is.

Mic has previously reported on some of these misconceptions, including that "Asian-American" does not just mean East Asian (i.e. Chinese, Japanese and Korean) but South Asian, Central Asian, Southeast Asian and Pacific Islander as well. And although some of these groups, like many Indian and Chinese-Americans, have on average attained great financial and academic success in the United States, others struggle.

Many Bangladeshi and Hmong Americans face significant poverty rates. About 37% of Cambodian-Americans lack a high school diploma. Today, as Asian-Americans become the fastest-growing racial group in the country, it is these groups that Trinh aims to document, ensuring they don't get left behind in the conversation.

"I hope my photo series can show what Asian-Americans are really doing in this country," Trinh said. "I want to combat the myths. We are hard-working. Many of us are immigrants. There's racism and prejudice against us. And still, we deserve to be here."